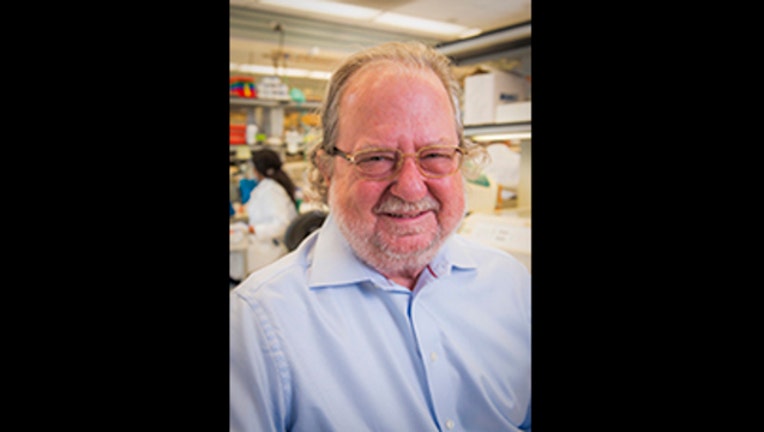 Allison has been named the 2015 winner of the Lasker-DeBakey Clinical Medical Research Award from the Albert and Mary Lasker Foundation. The Lasker awards, in their 70th year, honor major achievements in basic science, clinical research and public service around the world

"I'm honored and grateful to receive the Lasker award. As a basic scientist, I was pleasantly surprised, really kind of stunned, to receive the clinical award," Allison said. "This award is also important recognition of the early success of cancer immunotherapy and its great potential to extend survival of cancer patients for decades and ultimately to cure some types of cancer."

Allison's research into the biology of T cells, white blood cells that serve as the immune system's customized guided weapons, led him to develop an antibody that blocks an off switch on those cells, unleashing an immune response against cancer. Drugs using this approach, called immune checkpoint blockade, now are approved for treating late-stage melanoma and lung cancer. Hundreds of clinical trials worldwide are underway in earlier stages of the disease and against other cancers.

The first drug of this type, developed from Allison's research, was the first treatment ever shown to extend the survival of patients with late-stage, untreatable melanoma. Long-term studies show 20 percent of such patients treated with ipilimumab, marketed as Yervoy, survive for at least 10 years, previously unheard of results for the disease.

"The Lasker award highlights Jim's genius, creativity and passion to make an impact, all of which contributed to one of the most important therapeutic advances in a generation that continues to change the practice of oncology around the world," said MD Anderson President Ronald A. DePinho, M.D. "As we explore the full potential of immunotherapy, countless cancer patients already have experienced renewed promise and health thanks to this groundbreaking advance, and we remain hopeful for so much more."

After an early career posting at MD Anderson, Allison returned in 2012 to lead its immunology department and establish the cancer immunotherapy platform, a combination of expertise and infrastructure that brings together scientists and clinicians to better understand and advance cancer immunotherapy.

The platform is part of MD Anderson's Moon Shots Program, which is designed to harness scientific knowledge and develop new technologies that will dramatically reduce cancer deaths through prevention, early detection and treatment.

One goal is to understand why some patients benefit from treatment and some don't. Allison and colleagues also continue research to identify new molecules that block or stimulate immune response.

Since the development of Allison's drug to block an immune checkpoint called CTLA-4, other scientists identified the immune checkpoint protein PD1 on T cells. Anti-PD1 drugs are approved for melanoma and lung cancer and are being widely tested against other cancers. Combination clinical trials also are under way, blending the two types of checkpoint inhibitor or testing them along with radiation, molecularly targeted drugs, and other therapies.

Journey from lab to clinic

During his first stay at MD Anderson at what is now the institution's Molecular Carcinogenesis department, located at its Research Park in Smithville, Texas; Allison made a series of discoveries about T cell biology that led to checkpoint blockade.

He identified the T cell receptor, a protein on T cells that serves as the ignition switch of immune response when specialized immune cells present it with an antigen - bits and pieces of viruses, bacteria, fungi or abnormal host cells.

Later, at the University of California Berkeley, Allison showed that a second protein on T cells called CD28 must be engaged for full activation of T cells, the gas pedal of immune response.

Allison hypothesized that a brake on T cells called CTLA-4 might be blocked to free T cells to attack cancer. Decades of research indicated that the immune system could find and try to kill tumors but was somehow thwarted.

Allison and colleagues developed an antibody to plug up CTLA-4 and keep the brakes off. When this worked in mouse models against many cancer types, he resolved to get the approach tested in the clinic.

Years of persistence toward a pharmaceutical industry wary of past cancer immunotherapy failures eventually led to collaboration with a company called Medarex. The company was purchased by Bristol-Myers Squibb, which developed ipilimumab in clinical trials.

In 2011, the U.S. Food and Drug Administration approved it for untreatable or metastatic melanoma on the strength of a phase III clinical trial that showed the drug improved median survival by four months. Follow-up studies revealed the long-term survival for a fifth of patients. Bristol-Myers estimates 59,000 people have been treated with Yervoy worldwide.

Founded in 1942, the foundation seeks to improve health by accelerating support for medical research through recognition of scientific excellence, public education and advocacy. Mary Lasker, who led the foundation for decades, was a prominent activist for public investment in medical research and is widely credited with motivating Congress and various presidents to expand federal funding, particularly through the National Institutes of Health.

(Allison is the inventor of intellectual property owned by the University of California and license to Bristol-Myers Squibb. This relationship is managed in accordance with MD Anderson's conflict of interest policy.)