Texas Republicans are sending a charter plane to retrieve Texas Democrats in D.C., who say they will not budge.

Donations are pouring in for the Democrats who are in D.C. to evade arrest that would force a vote in Texas on proposed new voting laws.

The standoff hit day four on Thursday, with Democrats vowing not to leave until the special session Gov. Greg Abbott called to pass a controversial GOP voting bill and other red meat items for Republicans expires.

Beto O'Rourke's PAC has raised more than $500,000 for the travel, hotel and food expenses being racked up by more than 51 democrats who left the state in order to prevent a quorum in the house.

In addition to private planes, the Democrats are staying at a four-star D.C. hotel.

The identities of large donors to the PAC as well as the House Democratic caucus will eventually have to be disclosed, but not for months to come.

"There are some ethical concerns if unidentified donors are supporting the living expenses for an extended stay out of the state. That does raise issues about how Democratic lawmakers may be beholden to those donors," said SMU political science professor Matthew Wilson.

Wilson believes a bigger issue from a political perspective may be whether Democrats accept their $221 a day pay for a special session where they are not present.

Donations are pouring in for the Democrats who are in D.C. to evade arrest that would force a vote in Texas on proposed new voting laws.

"Their claim is, ‘We are working while in D.C.’ Republican response is, ‘You may think you are working, but it is not the work you were elected to do,’" Wilson said.

"We think House and Senate should adjourn, no per diem. It would save trouble, money, and most of all for Texans -- bad policy," he said.

But Republicans say it is appropriate for them to receive pay despite the stalled session because they are in the state's capitol ready to work.

"We are in place, designated by the constitution to meet for a Special Session and we are here to discharge our duty," said Rep. Travis Clardy (R – Nacogdoches). "We are literally answering the call."

Some Democrats say they have already contacted the house business operation office to say they will decline their special session pay while absent. It’s not known who has done so.

Thursday, Republicans published the names of absent Democrats who have started the process to return that money.

North Texas Representative Victoria Neave is on the list.

"I have not collected per diem. We have not received per diem. And whenever that happens, I know that there are discussions about returning that and we would urge our Republican colleagues to turn it in as well," said State Rep. Victoria Neave (D-Dallas). 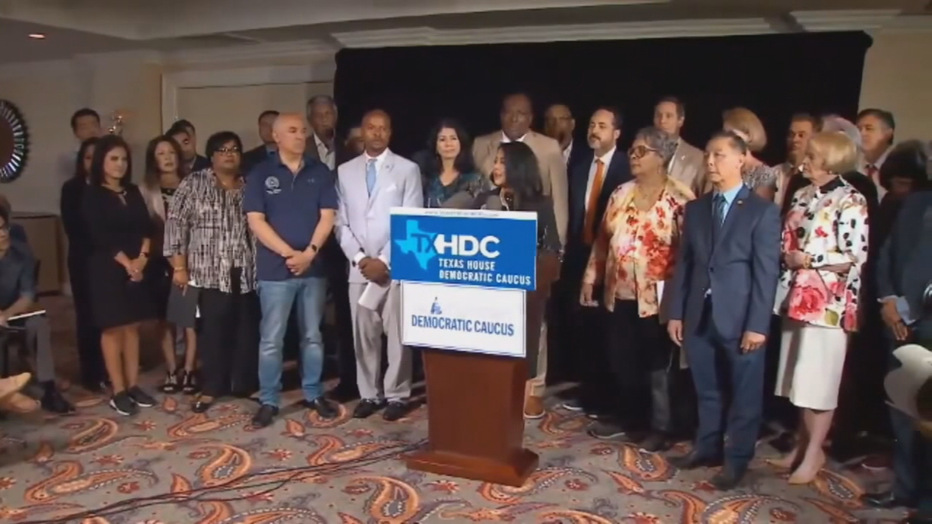 House Speaker Dade Phelan said he would charter a plane to go sit standby in the nation’s capital on Saturday for Democrats who have a "change of heart" and will come back to Texas. Texas Democrats said in a statement that the plane won’t be needed and said "we’re not going anywhere."

It’s the latest chess move as the two parties wage a public opinion battle over voting legislation that has stalled because Democrats fled.

Republicans took steps to up the pressure Thursday.

The Republican speaker stripped the Democratic speaker pro tem of his leadership role, but there’s been no wavering yet by Democrats, as money becomes a bigger part of the political debate.

"We're focused on our mission here. We're not going, we are determined to do everything that we can to use the rules of the House, use tools that we have," Neave said.

While Texas Republicans pressure Democrats to return to Austin.

"I think the fugitive Texas Democrats really have a losing hand here," said U.S. Sen. John Cornyn. "Governor Abbott can call multiple special sessions. I assume they cannot stay away forever and I assume at some point the money is going to run out."

Neave is among a group of Democrats who met with West Virginia Senator Joe Manchin.

He holds a perhaps pivotal vote that could move forward stalled federal voting rights legislation supported by many Democrats.

In the past, he’s rejected changing Senate rules to make it happen.

And Republicans push back against giving more federal control over elections.

"I do not support the federal government preempting state election law, except to the extent necessary to protect minority voting rights," Cornyn said.

But during that, he wants on the agenda a change to quorum requirements, so it is a simple majority plus one.

That would thwart efforts like the one currently underway by Texas Democrats.