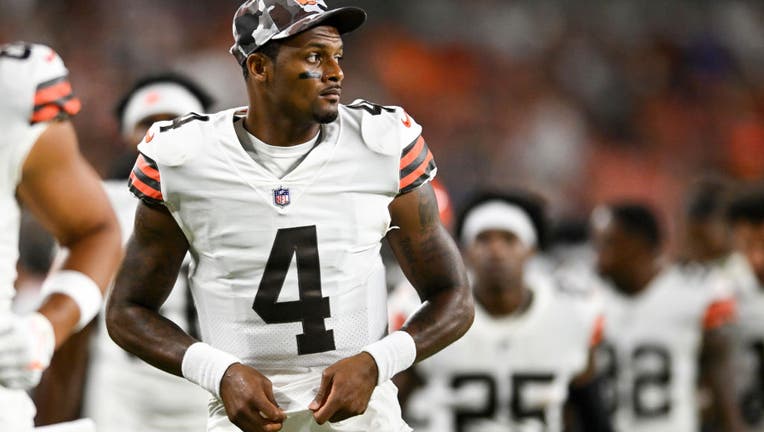 CLEVELAND, OH - AUGUST 27: Deshaun Watson #4 of the Cleveland Browns runs off the field at halftime of a preseason game against the Chicago Bears at FirstEnergy Stadium on August 27, 2022 in Cleveland, Ohio. (Photo by Nick Cammett/Diamond Images via

CLEVELAND (AP) — Cleveland Browns quarterback Deshaun Watson is facing a new civil lawsuit from a woman in Texas claiming he pressured her into a sexual act during a massage therapy session two years ago.

The woman, referred to in court documents as Jane Doe, filed the lawsuit on Thursday in Harris County District Court in Houston. She claims Watson asked to have sex with her after getting a massage in a hotel room in 2020. When she refused, he "was able to pressure her into oral sex."

According to the lawsuit, Watson paid her $300, although her normal charge is $115 for an hourly massage. The woman claims Watson continued to text her following the encounter.

She's seeking "minimal compensatory damages" but has "suffered mental anguish because of Watson’s behavior," according to the lawsuit.

"It is against Texas Civil procedure to file an anonymous civil law suit, though it is certainly permissible in a criminal case," Hardin said in an email to AP. "But in a civil case where you are seeking money, the defendant is entitled to know who you are."

The NFL did not immediately respond to a request for comment.

Watson is serving an 11-game NFL suspension for alleged sexual misconduct. The three-time Pro Bowler returned to the Browns' training facility earlier this week and is allowed to interact with his teammates and coaches after being banned since Aug. 30.

Watson has settled civil lawsuits with 23 of 24 women claiming he acted inappropriately while getting massages when he played for the Texans.

The Browns had no immediate comment on the new lawsuit.

The 27-year-old Watson settled in August with the league, agreeing to his suspension, a $5 million fine and to undergo independent counseling and therapy. He's not eligible to begin practicing until Nov. 14.

If he abides by the provisions in the settlement, Watson can be reinstated on Nov. 28 and play on Dec. 4, when the Browns visit Houston.

Watson has not spoken to the media since the settlement was reached on Aug. 18. He was seen in the Browns' locker room Thursday as his teammates prepared to play the New England Patriots on Sunday.

Before he played in an exhibition game this summer, Watson apologized for the first time to any women who may have been impacted by his behavior.

The Browns traded three first-round draft picks in March to Houston for Watson before signing him to a five-year, $240 million contract that's fully guaranteed.