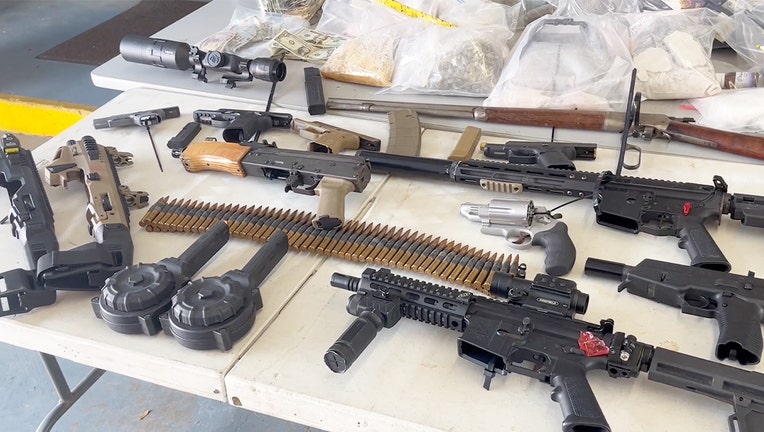 HOUSTON - A deadly Houston-area drug-trafficking ring has been taken down in a raid by a team of law enforcement agencies.

Six suspects were arrested on Wednesday, and firearms, vehicles and illegal drugs – some laced with fentanyl – were seized, thanks to a collaborative effort between Harris County Precinct 5 Constable's Office, the DEA, Texas DPS and the Houston Police Dept.

The drug ring, which was operating in West Harris County, has been linked to several recent overdose deaths caused by fentanyl in the Houston area.

Deputies confiscated 1 kilo of fentanyl-laced heroin, ½ kilo of cocaine, and 3 kilos of crystal meth as well as other illegal narcotics.

Several stolen vehicles, a large amount of cash, and multiple handguns, assault-style weapons, 50-round magazine drums, large-caliber ammunition, and an unserialized and untraceable firearm were also seized in Wednesday's raid.

Investigators are looking into whether the six suspects may be wanted in other drug-related crimes in the Houston area.

No word on the identity of the suspects or their charges at this time.