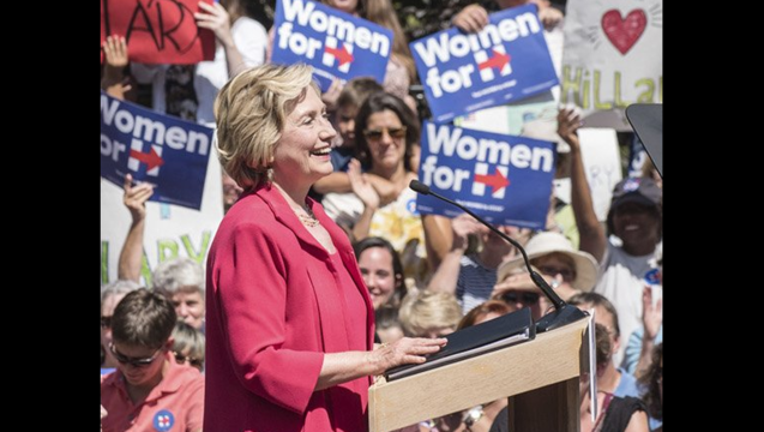 WASHINGTON (AP) — Democratic presidential candidate Hillary Rodham Clinton is dominating the money hunt in the 2016 campaign, collecting more big-dollar contributions than any other candidate in 26 states.

In nine states, including Illinois and Colorado, Clinton is pulling in more money than all the Republicans combined, according to an Associated Press analysis of individual donors who gave at least $200 this election cycle. Smaller donors aren't required to be identified.

Retired neurosurgeon Ben Carson was the second-best fundraiser, leading rivals in both parties in 10 states, from Alaska to Nebraska. Republicans Jeb Bush and Ted Cruz and socialist phenomenon Bernie Sanders on the Democratic side were the only other candidates to top the money race in more than one state.

Some candidates, including Sanders, Carson and celebrity Donald Trump, are drawing most of their funding from small donations. But Clinton's prowess for earning larger checks underscores her early fundraising advantage among the medium- and large-dollar donors who are important in bankrolling increasingly expensive presidential campaigns.

All told, the 22 major presidential candidates — including two who recently dropped out — have raised $274 million so far for their official campaigns. Clinton's campaign alone accounts for 28 percent of that haul. The analysis does not include super PACs, the outside groups that can raise unlimited amounts of money. Their influence at times challenged President Barack Obama's 2012 re-election effort.

The AP reviewed campaign contributions greater than $200 donated between Jan. 1 and Sept. 30. The data was updated Thursday night when candidates filed their most recent fundraising reports to the Federal Election Commission.

The geographic distribution of donors also tells the story of a Republican Party without a clear fundraising winner. Three times as many Republicans as Democrats are vying for their nomination. Carson's $30 million for the year puts him ahead of Cruz, the Texas senator who is in second place with a total of $26.5 million raised so far. Bush is in third, with $24.8 million for the year.

Even Carson's campaign was baffled by its fundraising lead in some states, spokesman Doug Watts said, noting that it doesn't hold to the tradition of relying upon state finance chairs to shake out donations. "Montana has been a stronghold for us since Day One, and we just sort of scratch our heads as to why," Watts said.

And then there's Trump.

The real estate mogul who has sat atop many GOP preference polls in recent months defies the usual political conventions — including ones concerning fundraising. Although the billionaire paid for the initial part of his campaign, the most recent fundraising filings show he collected almost enough contributions to cover his roughly $4 million in expenses between July and September.

"The way this thing is going has led to so much uncertainty among donors," said Fred Malek, a longtime Republican presidential fundraiser in Washington who is unaligned with a primary candidate. "People don't know what to do. They want more clarity before they really start giving."

Malek concedes Republicans are "not in a good place" compared to Clinton.

Like Clinton — a returning presidential contender and former first lady — Bush entered the race earlier this year with a ready-made fundraising operation upon which he could build. The former Florida governor's brother and father are ex-presidents.

Yet Bush isn't seeing nearly the returns Clinton is. He's the lead fundraiser in just four states — far fewer than Carson — and his campaign has raised roughly one-third of what Clinton's has.

And in another sign that Bush's fundraising network isn't all-powerful, Texas Sen. Ted Cruz not only was the best fundraiser in the Lone Star State, he more than tripled Bush's take there. That's somewhat surprising given that Bush counts his brother and father — both Texas residents — as some of his best fundraisers.

"Texans by nature love somebody who does what he says and fights for them," said Cox, who lives near Cruz's campaign headquarters in Houston. "The level of enthusiasm for him among donors here is really quite exciting."

Bush does hold command of fundraising in his home state of Florida, raising at least $2 million more in donations of at least $200 than rival Marco Rubio, one of the state's U.S. senators and former speaker of the Florida House.

Rubio, who has collected about $15.5 million for his presidential run since the start of the year, did not win the fundraising race in any single state; in fact, he was never better than third place in the money race, the data show. Bush also bested Rubio in Nevada, where Rubio spent much of his boyhood.

But Clinton raised more there than both of them combined.