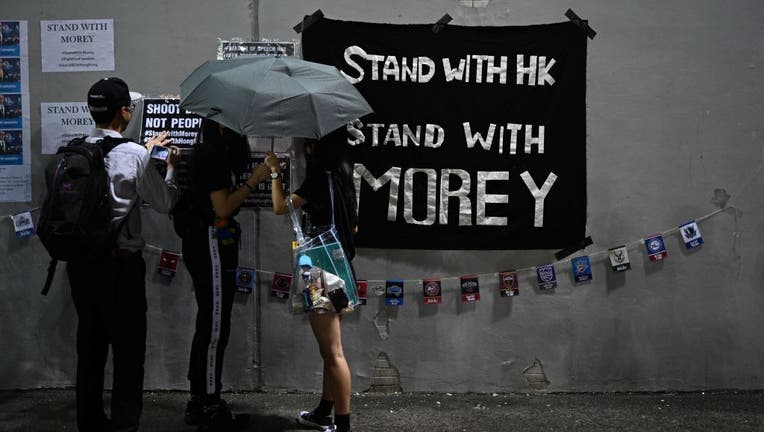 Protesters display posters at the Southorn Playground in Hong Kong on October 15, 2019, during a rally in support of NBA basketball Rockets general manager Daryl Morey and against comments made by Lakers superstar LeBron James. James sharply criticiz (Photo by ANTHONY WALLACE/AFP via Getty Images)

A Chinese state broadcaster alluded to consequences over those who criticize China in a message after Daryl Morey stepped down as Houston Rockets' general manager on Thursday.

CCTV warned “hurt the feelings of the Chinese people will have to pay a price,” signaling that Morey was forced out over his tweet in support of Hong Kong protesters last year. However, The New York Times reported that Morey’s departure was under his own volition.

“We reiterate that any words and deeds that attempt to hurt the feelings of the Chinese people will have to pay a price,” CCTV said in a statement, according to AFP.

The media outlet noted that the broadcaster wished the general manager well in his future endeavors but used a phrase meant for those who had died.

Executive VP of basketball operations Rafael Stone has been promoted in his place. Stone is now the second African-American general manager in the NBA.

Morey stepped down from his role as the Rockets’ general manager. The Rockets had gone 44-28 in the shortened 2019-20 season and lost in the Western Conference semifinals after Morey made the shrewd move of trading for Russell Westbrook to pair with James Harden in the previous offseason. ESPN reported Thursday that Morey had stepped down.

Morey had come under fire more than a year ago for his support of the Hong Kong protesters. The tweet led to China pulling the NBA games off the airwaves and the Communist regime pulling down banners advertising preseason games between the Los Angeles Lakers and Brooklyn Nets.

Rockets owner Tilman Fertitta had publicly supported Morey despite the wave of backlash it brought the NBA, including the increased scrutiny over the league’s ties with China and players failing to speak out against China despite dipping their toes into social justice waters.

Rockets focused on basketball after fallout from GM's tweet

Morey took over as general manager of the team in 2007 and is one of the people credited with valuing the three-pointer over the two-pointer, which led to a massive increase in long-range shots being taken. However, the idea never translated into championships of any kind for the Rockets.

Despite having teams with Harden, Westbrook, Chris Paul, Yao Ming and Dwight Howard, the Rockets never made it to the NBA Finals and haven’t been to one since 1995. The team has the longest active streak of playoff appearances at eight consecutive years.

Rafael Stone is expected to take over as general manager, ESPN reported.

The team is also in search of a new coach.

Houston and Mike D’Antoni parted ways earlier in the fall.