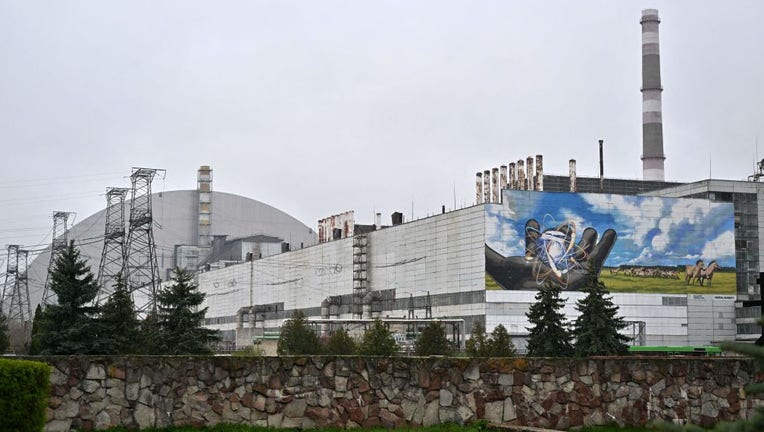 Photo of the New Safe Confinement at Chernobyl Nuclear Power Plant which covers the number 4 reactor unit, on the 36th anniversary of the world's worst nuclear disaster. (SERGEI SUPINSKY/AFP via Getty Images)

CHERNOBYL, Ukraine - Here in the dirt of one of the world’s most radioactive places, Russian soldiers dug trenches. Ukrainian officials worry they were, in effect, digging their own graves.

Thousands of tanks and troops rumbled into the forested Chernobyl exclusion zone in the earliest hours of Russia’s invasion of Ukraine in February, churning up highly contaminated soil from the site of the 1986 accident that was the world's worst nuclear disaster.

For more than a month, some Russian soldiers bunked in the earth within sight of the massive structure built to contain radiation from the damaged Chernobyl nuclear reactor. A close inspection of their trenches was impossible because even walking on the dirt is discouraged.

On April 26, 1986, an explosion and fire at the Chernobyl nuclear power plant in Ukraine caused radioactive fallout that begin to spew into the atmosphere. Dozens of people were killed in the immediate aftermath of the disaster while the long-term death toll from radiation poisoning is believed to number in the thousands.

On Tuesday’s anniversary of the disaster amid the ongoing Russian invasion, it’s clear that Chernobyl — a relic of the Cold War — was never prepared for this.

With scientists and others watching in disbelief from afar, Russian forces flew over the long-closed plant, ignoring the restricted airspace around it. They held personnel still working at the plant at gunpoint during a marathon shift of more than a month, with employees sleeping on tabletops and eating just twice a day.

Even now, weeks after the Russians left, "I need to calm down," the plant's main security engineer, Valerii Semenov, told The Associated Press. He worked 35 days straight, sleeping only three hours a night, rationing cigarettes and staying on even after the Russians allowed a shift change.

"I was afraid they would install something and damage the system," he said in an interview.

Workers kept the Russians from the most dangerous areas, but in what Semenov called the worst situation he has seen in his 30 years at Chernobyl, the plant was without electricity, relying on diesel generators to support the critical work of circulating water for cooling the spent fuel rods.

"It was very dangerous to act in this way," said Maksym Shevchuck, the deputy head of the state agency managing the exclusion zone. He was scared by it all.

Russia’s invasion marks the first time that occupying a nuclear plant was part of a nation's war strategy, said Rebecca Harms, former president of the Greens group in the European Parliament, who has visited Chernobyl several times. She called it a "nightmare" scenario in which "every nuclear plant can be used like a pre-installed nuclear bomb."

A visit to the exclusion zone, more desolate than usual, found that the invasion risked a catastrophe worse than the original explosion and fire at Chernobyl that sent radioactive material into the atmosphere and became a symbol of the Soviet Union’s stumbling final years. Billions of dollars were spent by the international community, including Russia, to stabilize and secure the area.

Now authorities are working with Ukraine’s defense ministry on ways to protect Chernobyl’s most critical places. At the top of the list are anti-drone systems and anti-tank barriers, along with a system to protect against warplanes and helicopters.
None of it will matter much if Russian President Vladimir Putin resorts to nuclear weapons, which Shevchuck says he can't rule out anymore.

Chernobyl needs special international protection with a robust U.N. mandate, Harms said. As with the original disaster, the risks are not only to Ukraine but to nearby Belarus and beyond.

"It depends from where the wind blows," she said.

After watching thousands of Soviet soldiers work to contain the effects of the 1986 accident, sometimes with no protection, Harms and others were shocked at the Russian soldiers’ disregard for safety, or their ignorance, in the recent invasion.
Some soldiers even stole highly radioactive materials as souvenirs or possibly to sell.

"I think from movies they have the imagination that all dangerous small things are very valuable," Shevchuck said.
He believes hundreds or thousands of soldiers damaged their health, likely with little idea of the consequences, despite plant workers' warnings to their commanders.

"Most of the soldiers were around 20 years old," he said. "All these actions proves that their management, and in Russia in general, human life equals like zero."

The full extent of Russia’s activities in the Chernobyl exclusion zone is still unknown, especially because the troops scattered mines that the Ukrainian military is still searching for. Some have detonated, further disturbing the radioactive ground. The Russians also set several forest fires, which have been put out.

In the communications center, one of the buildings in the zone not overgrown by nature, the Russians looted and left a carpet of shattered glass. The building felt deeply of the 1980s, with a map on a wall still showing the Soviet Union. Someone at some point had taken a pink marker and traced Ukraine’s border.

Semenov, the security engineer, recalled the Russians checking the remaining workers for what they called radicals.

"We said, ‘Look at our documents, 90% of us are originally from Russia,'" he said. "But we’re patriots of our country," meaning Ukraine.

When the Russians hurriedly departed March 31 as part of a withdrawal from the region that left behind scorched tanks and traumatized communities, they took more than 150 Ukrainian national guard members into Belarus. Shevchuck fears they’re now in Russia.

In their rush, the Russians gave nuclear plant managers a choice: Sign a document saying the soldiers had protected the site and there were no complaints, or be taken into Belarus. The managers signed.

One protective measure the Russians did appear to take was leaving open a line routing communications from the nuclear plant through the workers’ town of Slavutych and on to authorities in Ukraine's capital, Kyiv. It was used several times, Shevchuck said.

"I think they understood it should be for their safety," he said. The IAEA said Tuesday the plant is now able to contact Ukraine’s nuclear regulator directly.

Another Ukrainian nuclear plant, at Zaporizhzhia in southeastern Ukraine, remains under Russian control. It is the largest in Europe.

Shevchuck, like other Ukrainians, has had it with Putin. "We’re inviting him inside the new safe confinement shelter," he said. "Then we will close it."