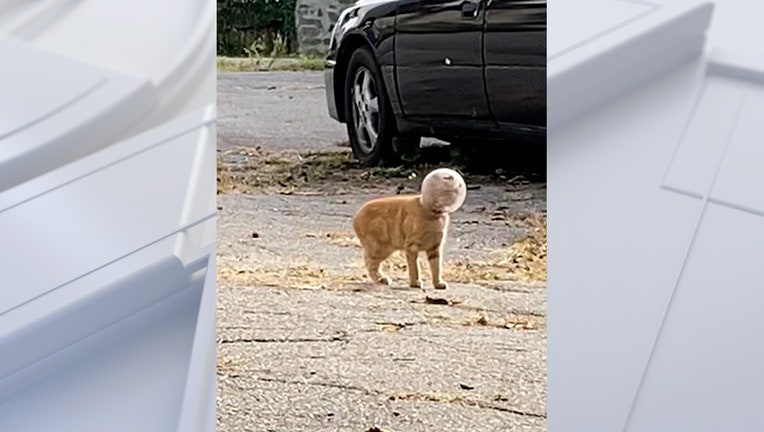 BOSTON - Curiosity may not have killed one cat in Massachusetts, but it certainly put her in a precarious situation after her head got stuck in a glass jar.

The kitten, now named "Buzz Lightyear" from the "Toy Story" movie franchise, was found by a resident along the 200 block of Danforth Street. The resident had been feeding and monitoring cats in the area.

The jar appeared to be a glass bowl or light fixture.

Responders said they found the written wandering along the roadway. Buzz was eventually captured with the use of a drop trap.

They were able to remove the glass jar. Buzz was then taken to a nearby animal care and adoption center. She was determined to be in good health and was given vaccines and spay surgery.

RELATED: How petting dogs could improve your attention span and motivation

"Buzz has settled into her new surroundings, however, because she is still learning to trust humans, she will need time for ARL staff and volunteers to help socialize the young cat, and she is not yet available for adoption," ARL said in an online statement.

The video was recorded on a home surveillance camera in Surfside, Texas on June 9, and showed the scene unfolding between the two animals. (Credit: Tony Gray)

Authorities said during the rescue, they discovered an unknown cat colony in the area. They have started capturing other cats in the area to provide medical treatment and spay/neuter surgeries before possibly placing them in homes.