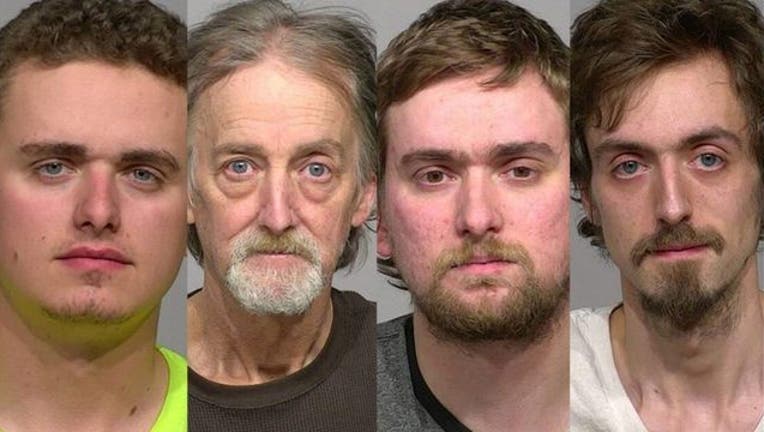 Brian Keene, second from left, is accused of knowing his sons Josiah, 20, Elijah, 27, and James, 29 (left to right) were allegedly sexually assaulting their younger siblings and doing nothing about it. (Milwaukee County Jail)

FOX NEWS - Three brothers in Milwaukee were charged with the alleged sexual assault of their younger siblings while their father, aware of the abuse, is accused of doing nothing to stop it.

The father, Brian Keene, who is 62, faces child neglect charges and failure to protect a minor, according to WTMJ.com.

The abuse, which happened for at least 10 years, came to light earlier this month when police received a call about a suspicious car and found one of the abuse victims, a 19-year-old woman, who told them that her younger siblings had run away from the home because of the assault and dirty conditions.

The younger siblings include girls and one boy.

Police found the children, who spoke of the sex abuse by the older brothers and the unsafe conditions – holes in the walls, floors, and lack of heat -- in the home. The children had been reported as being home-schooled, but police believe they received no academic instruction. It was not immediately clear where the children were found.

The 19-year-old woman told police that Elijah sexually assaulted her from the time she was 12 to when she was 15.

A 22-year-old sister said that Elijah sexually assaulted her several times when she was 8 years old. Another sister, 16, said Elijah molested her from the time she was a small child, forcing her to perform oral sex. She said that the oldest brother, James, made her touch him sexually, the Milwaukee Journal reported. A 12-year-old sister and 14-year-old brother told police their older brothers also assaulted them.

The victims accused the brothers of taking them to the basement and sexually assaulting them several times a week. The victims said their father knew but did nothing.

Brian reportedly told police he suspected his older sons were sexually abusing the girls when the boys were teenagers but chalked it to “raging hormones.”

Elijah admitted to the abuse of three of the four sisters who reported it and said he tried to stop but had a sexual addiction, police said.

Police said the investigation is ongoing and more charges are possible.

A preliminary hearing for the father and the sons is scheduled for April 23. They have not entered pleas, according to People magazine.

The mother, who left the father in 2014, is believed to have died several years ago.