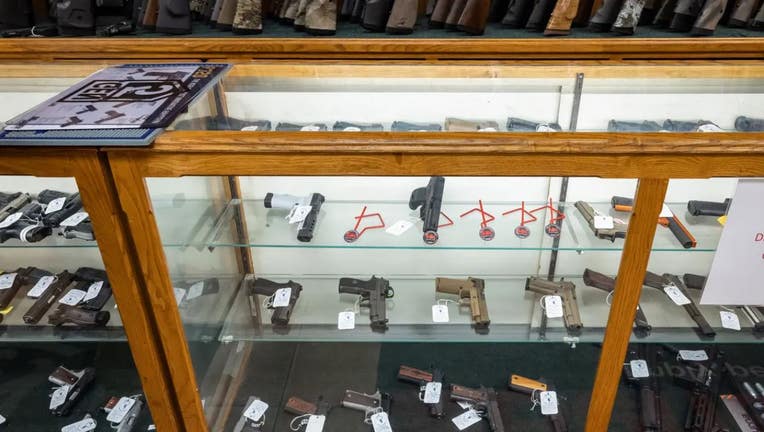 Hundreds of handguns and rifles for sale at McBride’s Gun’s in Central Austin on April 20. Credit: Jordan Vonderhaar for The Texas Tribune

AUSTIN, Texas - **EDITOR'S NOTE** The original headline to this story has been shortened for length.

The Texas House on Wednesday rejected changes the Senate made to a Republican-backed proposal to allow Texans to carry handguns without a license, sending the bill behind closed doors for further negotiations.

Before the permitless carry bill can head to Gov. Greg Abbott, who has said he would sign it into law, a conference committee made up of representatives and senators will have to reach a compromise that must get approval from both chambers.

House Bill 1927 would nix the requirement for Texas residents to obtain a license to carry handguns if they’re not prohibited by state or federal law from possessing a gun.

Among other changes, state senators last week approved an amendment barring permitless carry from people convicted in the past five years of making a terroristic threat, deadly conduct, assault that causes bodily injury or disorderly conduct with a firearm. The chamber also approved an amendment that enhances criminal penalties for illegal weapons carried by felons and those convicted of family violence offenses.

Bill author state Rep. Matt Schaefer, R-Tyler, drew cheers Wednesday when he announced he was rejecting the Senate changes. House Speaker Dade Phelan said the House conferees for the committee that will negotiate the bill are Republican Reps. Schaefer, James White and Dustin Burrows and Democratic Reps. Terry Canales and Ryan Guillen – two of the seven Democrats who voted for the bill.

Proponents of what Republicans call "constitutional carry" argue that Texas should follow the lead of at least 20 other states with similar laws on the books. Meanwhile, gun control advocates are sounding the alarm about making it easier to carry firearms after repeated instances of gun violence — including 2019’s massacres in El Paso and Midland-Odessa that left 30 people dead.

Under current state law, Texans must generally be licensed to carry handguns openly or concealed. Applicants must submit fingerprints, complete four to six hours of training and pass a written exam and a shooting proficiency test. Texas does not require a license to openly carry a rifle in public.

Lt. Gov. Dan Patrick and other Republicans who were initially noncommittal about the bill were under immense political pressure this session from conservatives and gun rights advocates, who have long lobbied the Texas Legislature for permitless carry but historically struggled to win support.

The cause quickly gained momentum this year despite objection from gun control groups, Democrats and some members of law enforcement. A solid majority of Texas voters don't think permitless carry should be allowed, according to the latest University of Texas/Texas Tribune poll.