The iconic Battleship Texas moved from the San Jacinto Battle Ground Site in La Porte to the Gulf Copper Shipyard in Galveston starting Wednesday for extensive renovations to the ship's hull.

The transfer was set for 5:30 a.m. Wednesday and took up to 10 hours to complete.

FOX 26 Reporter Natalie Hee has more on the move and what it means for the iconic battleship.

Crews have spent the last year and a half preparing for the $35 million restoration project. The last time a major renovation like this was done on the ship was back in 1988. Ironically, the restoration will be happening at the same shipyard in Galveston. 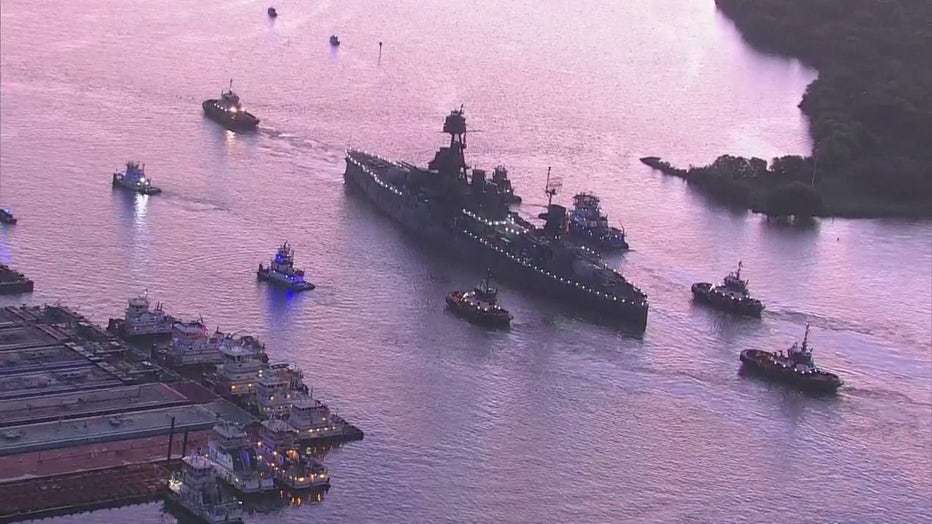 "She’s coming out stern first so once we get her in the Houston Ship Channel, we have to turn her 90 degrees," said Bruce Bramlett, Chief Operating Officer at Battleship Texas. "At that point, we’ll hook the tow tug up to the front of her. There will be a trailing tug."

Once in Galveston, Battleship Texas will be lifted out of the water to begin the overdue renovations for its recurring leaks.

"We’re to the point where if we didn’t intervene and if we didn’t do something, the ship’s days are really over. There was a lot of consideration in 2019, was it actually time to consider scrapping this ship?" Bramlett said.

However, that unthinkable idea was quickly extinguished after the millions in funding were approved with unanimous, bipartisan support during the 2019 state legislature.

The ship, which is more than 100 years old and was involved in both World Wars, was opened to the public one last time in March before undergoing preparations for the move.

"We’re also talking about the only surviving U.S. ship that served in both World War I and World War II. And if you look at World War II, she’s in nearly every major battle so you get North Africa, D-Day, Okinawa, Iwo Jima," Bramlett said.

Bramlett hopes BattleShip Texas will be in awe at the restorations once they're complete and open to the public again.

The renovations are expected to take up to 18 months to complete.

For a full timeline of the ship's departure and dry dock, or to track its live progress Wednesday, click here.