Survivors of the Astroworld Festival tragedy tell their stories

HOUSTON - Investigators are expected to examine the design of safety barriers and the use of crowd control in determining what led to a crush of spectators at a Houston music festival that left eight people dead and hundreds more injured.

Authorities planned to use videos, witness interviews and a review of concert procedures to figure out what went wrong Friday night during a performance by rapper Travis Scott. The tragedy unfolded when the crowd rushed the stage, squeezing people so tightly they couldn’t breathe.

At least eight people died during the late-night celebrations of Travis Scott's third annual music festival Astroworld, according to Houston officials, and several other people were injured.

Billy Nasser, 24, who had traveled from Indianapolis to attend the concert, said about 15 minutes into Scott’s set, things got "really crazy" and people began crushing one another. He said he "was picking people up and trying to drag them out."

Nasser said he found a concertgoer on the ground.

"I picked him up. People were stepping on him. People were like stomping, and I picked his head up and I looked at his eyes, and his eyes were just white, rolled back to the back of his head," he said.

Over the weekend, a makeshift memorial of flowers, votive candles, condolence notes and T-shirts took shape outside at NRG Park. 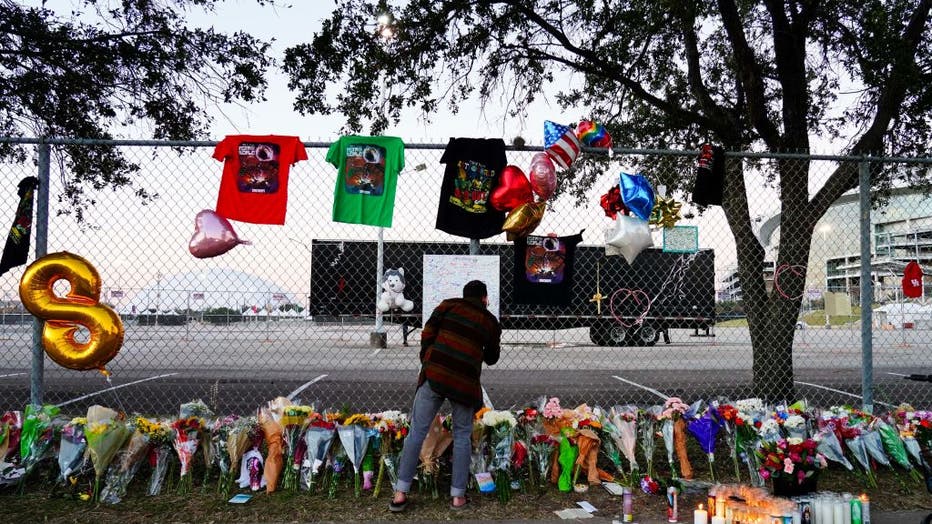 HOUSTON, TX - NOVEMBER 07: A visitor writes a note at a memorial outside of the canceled Astroworld festival at NRG Park on November 7, 2021 in Houston, Texas. According to authorities, eight people died and 17 people were transported to local hospit

Michael Suarez, 26, visited the growing memorial after the concert.

"It’s very devastating. No one wants to see or hear people dying at a festival," Suarez said. "We were here to have a good time — a great time — and it’s devastating to hear someone lost their lives."

The dead, according to friends and family members, included a 14-year-old high school student; a 16-year-old girl who loved dancing; and a 21-year-old engineering student at the University of Dayton. The youngest was 14, the oldest 27.

Houston officials did not immediately release the victims’ names or the cause of death, but family and friends began to name their loved ones and tell their stories Sunday.

PHOTOS: The names, faces of lives lost from the Astroworld tragedy

Tears continue to fall for loved ones lost from the deadly celebrations at Astroworld Festival, where eight people died and hundreds of attendees were seriously injured.

Thirteen people remained hospitalized Sunday. Their conditions were not disclosed. Over 300 people were treated at a field hospital at the concert.

City officials said they were in the early stages of investigating what caused the pandemonium at the sold-out Astroworld festival, an event founded by Scott. About 50,000 people were there.

Authorities said that among other things, they will look at how the area around the stage was designed.

Julio Patino, of Naperville, Illinois, who was in London on business when he got a middle-of-the-night call informing him his 21-year-old son Franco was dead, said he had a lot of questions about what happened.

"These concerts should be controlled," Patino said. "If they don’t know how to do that, they should have canceled the concert right then, when they noticed there was an overcrowd." He added: "They should not wait until they see people laying down on the floor, lifeless."

FOX 26's Denise Middleton spoke with an ICU nurse who was in attendance during the Astroworld music festival and assisted first responders at the concert, where eight people died and several other members of the crowd were injured.

Steven Adelman, vice president of the industry group Event Safety Alliance, which was formed after the collapse of a stage at the Indiana State Fair in 2011 killed seven people, helped write industry guidelines widely used today.

Besides looking at safety barriers and whether they correctly directed crowds or contributed to the crush of spectators, Adelman said, authorities will look at whether something incited the crowd besides Scott taking the stage.

Adelman said another question is whether there was enough security there, noting there is a nationwide shortage of people willing to take low-wage, part-time security gigs.

"Security obviously was unable to stop people. Optically, that’s really bad-looking," he said. "But as for what it tells us, it’s too early to say."

Contemporary Services Corp., headquartered in Los Angeles, was responsible for security staff at the festival, according to county records in Texas. Representatives for the company — which advertises online as being "recognized worldwide as the pioneer, expert and only employee owned company in the crowd management field" — did not immediately respond to emails and phone messages seeking comment.

Houston police and fire department officials said their investigation will include reviewing video taken by concert promoter Live Nation, as well as dozens of clips from people at the show.

Officials also planned to review the event’s security plan and various permits issued to organizers to see whether they were properly followed. In addition, investigators planned to speak with Live Nation representatives, Scott and concertgoers.

Izabella Ramirez of Texas City was celebrating her 21st birthday and said that once Scott came on stage, no one could move.

"Everybody was squishing in, and people were trying to move themselves to the front. You couldn’t even lift up your arms," Ramirez said.

Ramirez said a security guard pulled her over the barricade, while her date, Jason Rodriguez, lifted her up.

On video posted to social media, Scott could be seen stopping the concert at one point and asking for aid for someone in the audience: "Security, somebody help real quick."

There is a long history of similar catastrophes at concerts, sporting events and even religious events. In 1979, 11 people were killed as thousands of fans tried to get into Cincinnati’s Riverfront Coliseum to see a concert by The Who. Other past crowd catastrophes include the deaths of 97 people at a soccer match in Hillsborough Stadium in 1989 in Sheffield, England, and numerous disasters connected with the annual hajj pilgrimage in Saudi Arabia.

Experts who have studied deaths caused by crowd surges say they are often a result of too many people packed into too small a space.

Also Sunday, one of the first of many expected lawsuits was filed on behalf of a man injured in the crush of people in state court in Houston. Attorneys for Manuel Souza sued Scott, Live Nation and others, saying they were responsible.

In a tweet posted Saturday, Scott said he was "absolutely devastated by what took place." He pledged to work "together with the Houston community to heal and support the families in need."