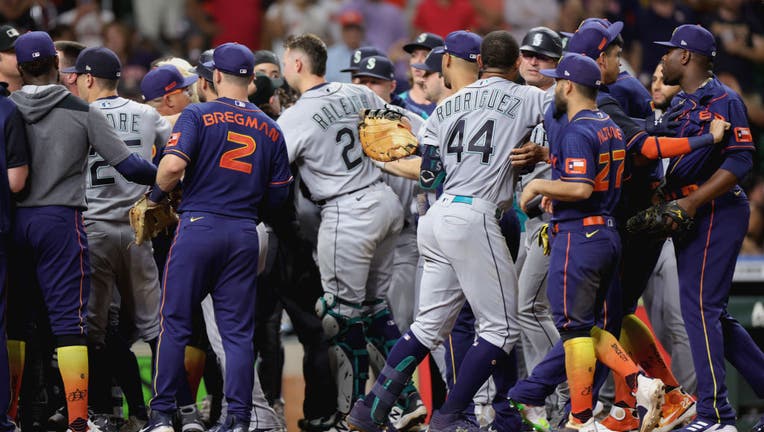 HOUSTON, TEXAS - JUNE 06: Houston Astros and Seattle Mariners benches clear after Ty France #23 of the Seattle Mariners was hit by a pitch during the ninth inning at Minute Maid Park on June 06, 2022 in Houston, Texas. (Photo by Carmen Mandato/Getty

HOUSTON - Houston Astros pitcher Hector Neris has received a four game suspension following a bench-clearing on the field incident during a game against the Seattle Mariners on Monday night.

It all happened at Minute Maid Park in the top of the ninth-inning, Major League Baseball officials said.

Astros manager Dusty Baker also received a one-game suspension and an undisclosed fine for the intentional actions of Neris.

Astros coaches Joe Espada, Omar López, and Troy Snitker have each received undisclosed fines for actions that contributed to causing the incident.

Unless appealed, the suspension of Neris is scheduled to begin on Tuesday night, when the two clubs will continue their series in Houston.

The Houston Astros said Neris has elected to appeal his suspension and will be available in the lineup Tuesday night against the Mariners.

Baker, however, must serve his suspension on Tuesday.