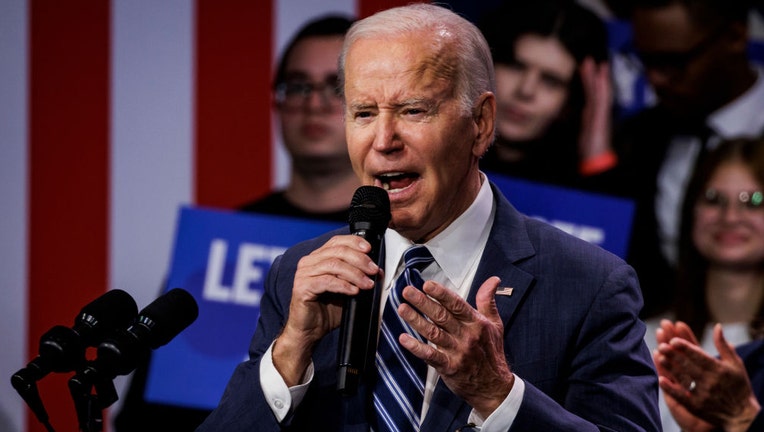 President Joe Biden speaks during an event hosted by the Democratic National Party at the Howard Theatre on November 10, 2022 in Washington, DC. (Samuel Corum/Getty Images)

"I don't think there's enough votes," he said at a press conference during the Group of 20 summit in Indonesia.
Biden's blunt comments reflected how Democrats' euphoria over their strength in the midterms will soon collide with the likely reality of divided government in Washington.

During the campaign, Biden said that if Democrats picked up seats, the first piece of legislation that he would send to Congress would be to enact a nationwide right to abortion.

The right was previously guaranteed only by the U.S. Supreme Court in the landmark 1973 Roe v. Wade decision, and the court's conservative majority overturned that ruling earlier this year.

Although Democrats defied historical odds by avoiding a midterm wipeout, they did not gain enough ground to ensure abortion access nationwide.

Asked what voters might expect on the issue, Biden replied, "I don’t think they can expect much of anything."

Although ballots are still being counted, Republicans are on track to take control of the House of Representatives by a narrow margin, putting them in position to block any abortion legislation.

"I think it's gonna be very close, but I don't think we're gonna make it," Biden said.

Democrats will maintain control of the Senate, and may even expand their majority after next month's runoff in Georgia. But some members of the party have been unwilling to sidestep filibuster rules to pass an abortion law.

RELATED: State by state: Abortion laws across the U.S.

Biden previously said "we need two more senators" to codify abortion rights, a reference to Sens. Kyrsten Sinema of Arizona and Joe Manchin of West Virginia, who want to preserve the filibuster.

If Sen. Raphael Warnock of Georgia wins a second term next month, Democrats will have only gained one seat.