2 dead after shooting at gas station in SE Houston

Houston police are investigating a shooting at a gas station that left two people dead. (EDITOR'S NOTE: This video is from the initial crime.)

HOUSTON - Two older teenagers have been arrested in a deadly shooting at a southeast Houston gas station earlier this week.

Evan Scott Redmond and Camren Keith Johnson are both charged with capital murder for the death of two men on Monday, Aug. 1.

The identity of the victims, aged 20 and 22, are pending notifications to family members by the Harris County Institute of Forensic Sciences.

BACKGROUND: 2 dead after shooting at gas station in SE Houston

According to Houston Police Department, officers responded to a shooting call at a convenience store in the 10600 block of Monroe Rd around 1:35 a.m.

They found a male victim inside the store with multiple gunshot wounds. Houston Fire Department paramedics transported the man to an area hospital, where he was pronounced dead.

Detectives learned the victims were inside a white Mercedes-Benz in the parking lot. Redmond, 18, exited the front passenger seat of a black Nissan Altima and entered the Mercedes.

HPD says surveillance video shows at least one shot was fired. One victim got out of the driver's seat of the Mercedes and ran into the convenience store.

The Nissan drove away from the scene, followed by the Mercedes, which was now stolen and being driven by Redmond, according to police. 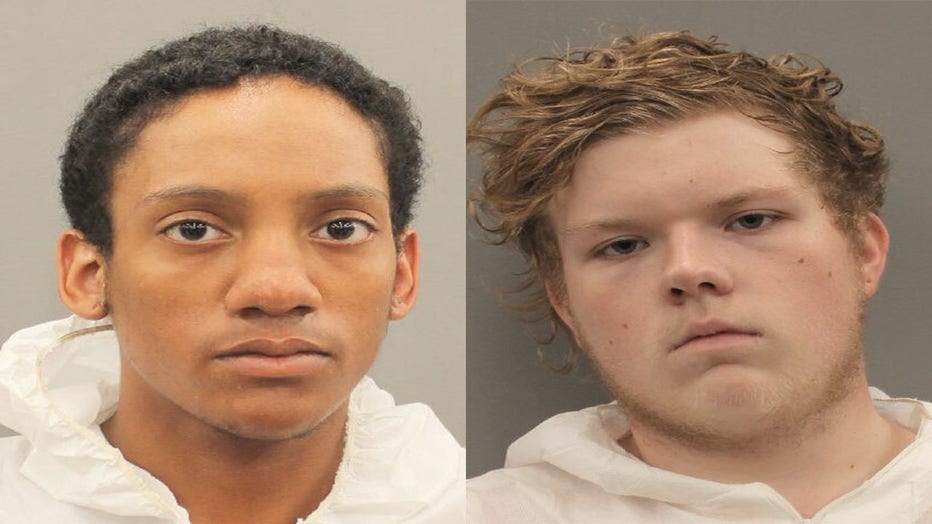 Camren Keith Johnson, 19, and Evan Scott Redmond, 18, are charged with capital murder for the shooting death of two men in southeast Houston.

Officers later found the second victim with multiple gunshot wounds on the roadway in the 1000 block of Pearland Parkway. It appeared he was thrown from the Mercedes.

Officers say they later observed the stolen Mercedes and attempted a traffic stop. The driver failed to comply, which led to a chase. It ended when the Mercedes rolled over and crashed in the 2200 block of Dixie Farm Road.

Redmond was in the driver’s seat of the stolen vehicle. Paramedics transported him to an area hospital with minor injuries.

Police say he admitted to his role in the shooting and the subsequent incidents.

HPD officers later located the Nissan Altima at a home in Pearland.

Officers took Johnson, 19, into custody without incident. HPD says he later admitted to being the driver of the Nissan.