WASHINGTON - An offshore wind project off Massachusetts that would create enough electricity to power 400,000 homes and is touted by backers as a key piece of America’s transition to renewable energy was approved Tuesday by the federal government.

"Massachusetts should be proud that this decision launches the nation’s first commercial-scale offshore wind project on the Commonwealth’s shores," said Governor Charlie Baker. "This groundbreaking project will produce affordable, renewable energy, create jobs and prove Massachusetts developed a successful model for developing offshore wind energy. We appreciate the federal government’s partnership to grant this approval and look forward to working with Vineyard Wind to create thousands of jobs and set the Commonwealth on a path to achieve Net Zero emissions."

The 800-megawatt Vineyard Wind project, south of Martha’s Vineyard near Cape Cod, would be the first utility-scale wind power development in federal waters. The nearly $3 billion project is a critical part of the Biden administration’s plan to grow renewable energy in the U.S.

The approval of the project, which could be completed in about two years, came after decades of debate about the sustainability of U.S. offshore wind. Secretary of the Interior Deb Haaland said the approval will create thousands of jobs and is a step toward President Joe Biden’s plan for 30 gigawatts of offshore wind by 2030. 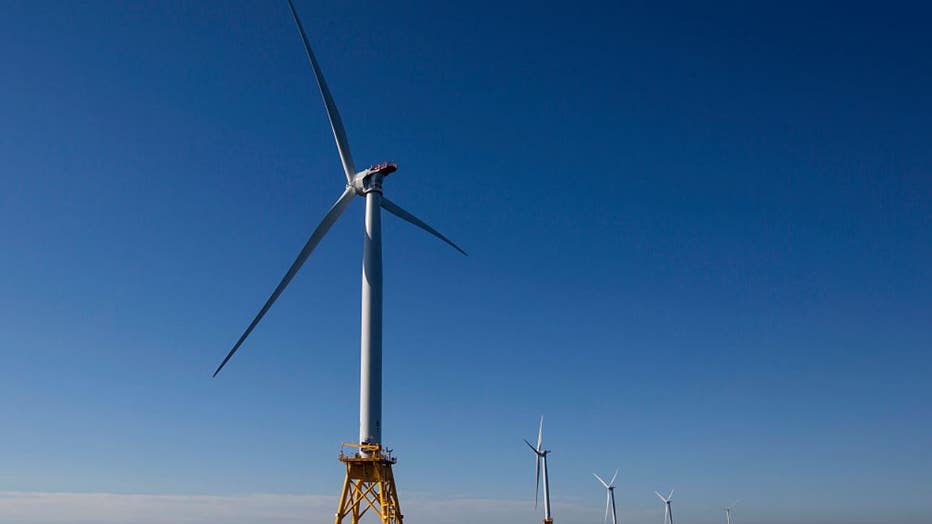 "It will create jobs that will support families, boost local economies and address climate injustice," Haaland said. "More importantly, it will create a new generation of clean energy jobs and leave a livable planet for future generations."

The project would consist of 84 wind turbines located 12 nautical miles off Martha’s Vineyard. The project and Ocean Wind, a proposed 1,100-megawatt offshore wind project off New Jersey, are keystones in the Biden administration’s push to grow offshore wind as a way to fight climate change and create jobs.

Vineyard Wind follows the scrapped Cape Wind project, which failed after opposition from some high-profile liberals and conservatives alike. Supporters of Vineyard Wind have said the newer project is better sited than Cape Wind, which would’ve been closer to shore, and that it’s more in tune with today’s political climate.

But Vineyard Wind also faces opposition. Commercial fishing businesses have said the growth of offshore wind projects off the East Coast would make it difficult for them to harvest valuable seafood species such as scallops and lobsters.

The Responsible Offshore Development Alliance, a coalition of fishing groups and businesses, characterized the approval of the project as a sellout to multinational corporations that hope to profit on offshore wind in the U.S.

"For the past decade, fishermen have participated in offshore wind meetings whenever they were asked and produced reasonable requests only to be met with silence," said Anne Hawkins, executive director of the group. "From this silence now emerges unilateral action and a clear indication that those in authority care more about multinational businesses and energy politics than our environment, domestic food sources, or U.S. citizens."

The project is a $2.8 billion joint venture of Avangrid Renewables and Copenhagen Infrastructure Partners. Vineyard Wind CEO Lars T. Pedersen called the approval "not about the start of a single project, but the launch of a new industry." He also said the approval "means the jobs, economic benefits and clean energy revolution" associated with the project can come to fruition.

Environmental groups and clean power advocates trumpeted Tuesday’s approval. Heather Zichal, chief executive officer of the American Clean Power Association, called it a "historic day for clean energy and for our country" and a sign that renewable energy is on the rise in the U.S.

"Now is the time to push forward on offshore wind, catch up to global competitors, and decarbonize our electric grid, so that the U.S. can deliver economic and environmental benefits to our citizens and combat climate change," Zichal said.