Hurricane Ida made landfall Sunday afternoon as a Category 4 hurricane with maximum sustained winds of 150 mph.

Ida blasted ashore Sunday as one of the most powerful storms ever to hit the U.S., blowing off roofs and reversing the flow of the Mississippi River as it rushed from the Louisiana coast toward New Orleans and one of the nation’s most important industrial corridors.

Around 12:15 p.m. Friday, Ida strengthened to a hurricane after making landfall in Cuba. Initially, it seemed like Ida would reach that status on Saturday but continued to grow stronger as it headed for Louisiana. And once it arrived Sunday in Louisiana, Ida began its reign of destruction on the city of New Orleans.

FOX 26 Chief Meteorologist Dr. Jim Siebert says Ida's impact will be minor for the Texas coast but will be very dangerous for our friends in Louisiana, Mississippi, and Alabama.

"It’s difficult to describe the immense power of this storm and my concern for anyone in its path," Dr. Jim said. "It will make landfall Sunday, but its impact will be felt for years to come."

The severity behind Ida could not be understated as hours after the hurricane hit, virtually all of New Orleans suffered power outages even though it started weakening by Sunday evening.

Hurricane Ida roared through earlier Sunday and just slammed Louisiana with heavy rain at almost 150 miles an hour and just when things couldn't get bleaker, officials say, all of New Orleans is now without power.

Life-threatening storm surge, destructive winds, and flooding rainfall hit the Louisiana coast Sunday and hospital staff already overwhelmed by the state’s fourth COVID-19 surge have an added burden in the coming days — working alongside one of the most powerful hurricanes to ever hit the United States.

Jim McIngvale, affectionately known as "Mattress Mack" is already getting ready to help the folks of Louisiana. He's loading up his truck with aid and supplies. FOX 26's Jose Grinan tells us more with the ongoing relief efforts.

Additionally, Ida's arrival is on the 16th anniversary of Hurricane Katrina, which devastated the state of Louisiana, but officials say they are working to ensure residents are not faced with the same calamity as they did nearly two decades ago.

RELATED: Hurricane Ida hits Louisiana as one of most powerful hurricanes to strike US

In fact, President Joe Biden gave a press conference Sunday afternoon from FEMA headquarters noting relief efforts are underway but encouraged residents to also take shelter and look out for their neighbors as Ida looks to cause destruction throughout its path on the Gulf Coast.

VISIT OUR TROPICS PAGE FOR THE LATEST RADARS

Southeast Texas meanwhile, is seeing the minimal impact and experiencing relatively normal weather for the end of August. Chances for rain are expected to increase during the coming week.

For the Louisiana area, the impacts from the flood seem to be more pressing and will remain a threat until about Tuesday before it downgrades to a depression. However, we're told the hurricane could weaken overnight Sunday into a category 2, which can still cause some severe damage.

As of Sunday around 6 p.m., Ida dropped in intensity to a Cat. 3 storm with winds at 125 mph. The rainfall will remain heavy and stay strong for hours. 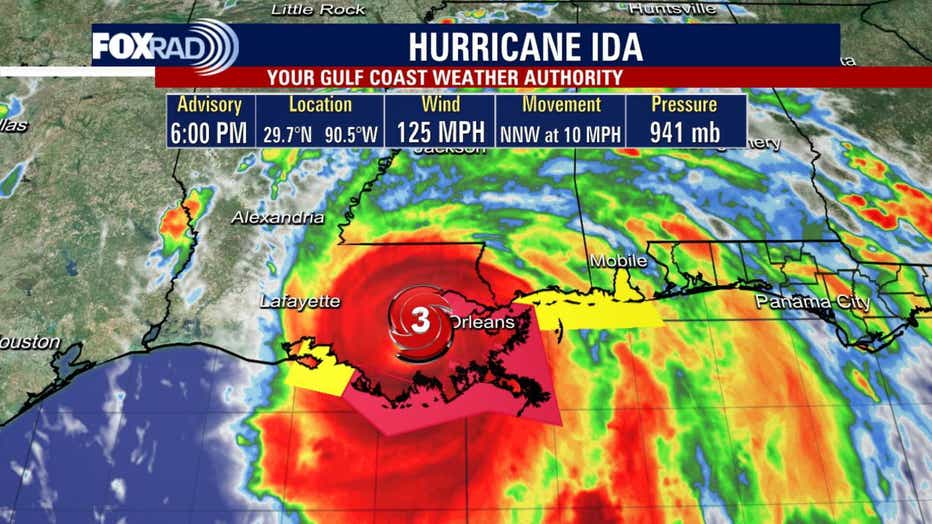 "This storm can't fall apart quick enough for anyone in it," Dr. Jim said.

FOX 26 Houston is your Gulf Coast Weather Authority and we will continue to update this story as we learn more information about this developing hurricane.