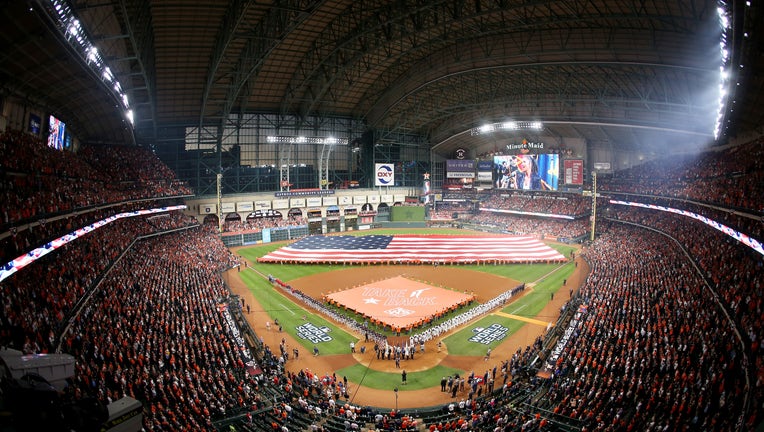 HOUSTON: An American flag is displayed during the national anthem prior to Game 1 of the 2019 World Series between the Houston Astros and the Washington Nationals at Minute Maid Park. ( Photo by Bob Levey )

HOUSTON - The Houston Astros are looking to even the World Series with the Washington Nationals in Game 2 Wednesday night in Houston.

The World Series opener on Tuesday night ended with a 5-4 loss for the Astros, despite a record-setting homerun by George Springer. Springer set a record by homering in his fifth straight World Series game, breaking a record he had shared with Lou Gehrig and Reggie Jackson.

Observers and analysts have made much of the pitching matchups featured in this series.

Game 1 was Gerrit Cole's first loss since May 22.

For the Washington Nationals, Stephen Strasburg will be on the bump. He was 3-0 with a 1.64 ERA in the NL playoffs. He went 18-6 and set a career-high for wins during the regular season. He's pitched once in Houston, throwing six scoreless innings in 2017.

Here's what else you need to know for tonight's game:

WORLD SERIES: Houston is behind in the series as Washington leads 1-0

BOTTOM LINE: The Astros are 60-21 in home games. Houston has a team batting average of .213 this postseason, Jose Altuve has led them with an average of .333, including eight extra-base hits and eight RBIs. The Nationals are 43-38 in road games. Washington has a team slugging percentage of .389 this postseason, Juan Soto leads them with a mark of .548, including five extra-base hits and 10 RBIs.

REGULAR SEASON TOP PERFORMERS: Alex Bregman led the Astros with 41 home runs and had a slugging percentage of .592. Anthony Rendon led the Nationals with 174 hits and had a .319 batting average.

The Associated Press contributed to this article