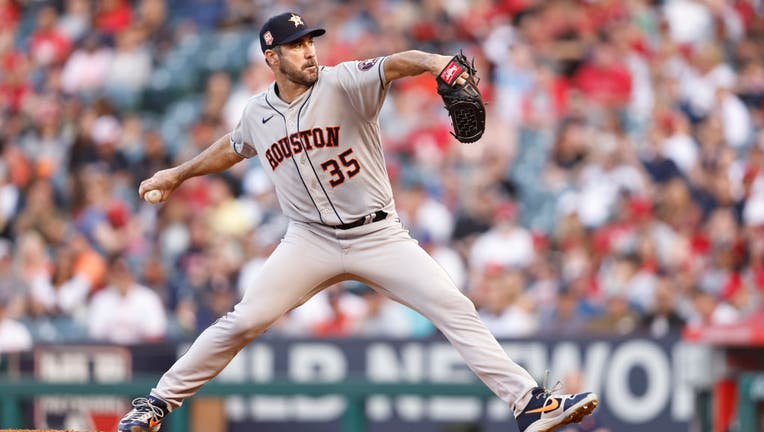 ANAHEIM, CALIFORNIA - APRIL 09: Justin Verlander #35 of the Houston Astros pitches against the Los Angeles Angels during the first inning at Angel Stadium of Anaheim on April 09, 2022 in Anaheim, California. (Photo by Michael Owens/Getty Images)

Mike Trout and Jared Walsh homered in the Angels' first victory of the season. The Halos held defending AL champion Houston to two hits, with Raisel Iglesias' save capping 3 2/3 hitless innings from the bullpen.

Syndergaard (1-0) and Verlander (0-1) both are back this season from lengthy absences after elbow surgery, and both veterans performed impressively at Angel Stadium.

Syndergaard yielded two weak singles and two walks over 5 1/3 innings. While the imposing right-hander known as Thor had just one strikeout, he induced 11 groundouts from the Astros' powerful lineup.

Trout's first homer since May 4 traveled 445 feet off a 98.8-mph fastball -- the fastest pitch Trout has ever hit out of the yard -- from Ryne Stanek. The three-time AL MVP missed the final 4 1/2 months of last season with a calf injury.

Syndergaard was limited to two one-inning appearances -- both late last year -- for the Mets over the past two seasons while working his way back from surgery. He signed a one-year, $21 million deal with Los Angeles and emerged from spring training with a healthy arm and a determination to show he's back.

Verlander had surgery in September 2020 and missed last season while recovering. Now 39, the two-time AL Cy Young winner feels he's capable of resuming his career at his customary elite level, and his return start looked promising.

Walsh mashed Verlander's first pitch of the second inning to deep center for the Angels' first homer of the season.

Verlander struck out Ohtani twice with inside pitches that painted the black, although both calls displeased the AL MVP. Verlander celebrated with a subtle fist-pump after he escaped a fifth-inning jam by fanning Ohtani and then retiring Trout on a flyout to strand two Angels.