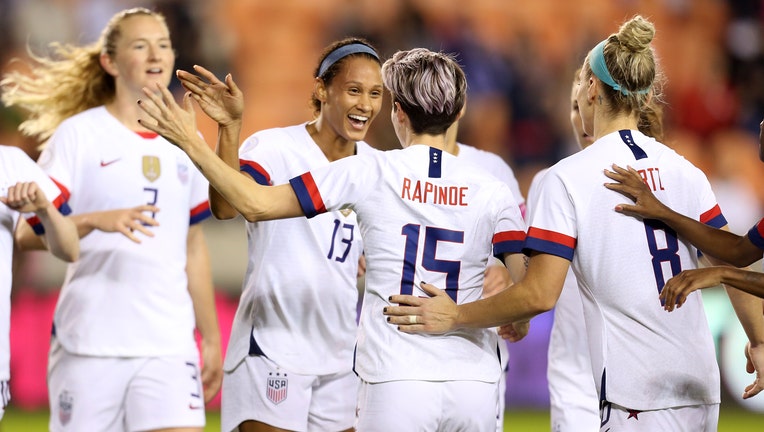 Lynn Williams #13 and Megan Rapinoe #15 of USA celebrate the second goal of their team during the group A game between United States and Haiti as part of the CONCACAF Women's Olympic Qualifying at BBVA Compass Stadium on January 28, 2020 in Houston, (Omar Vega / Getty Images)

HOUSTON - The U.S. Women’s National Team began the 2020 Concacaf Women’s Olympic Qualifying tournament with a 4-0 victory against Haiti at BBVA Stadium in Houston.

Within the first two minutes of the match, Christen Press scored the game's opening goal. The early 1-0 lead made the USWNT look to be set for more goals, but a tough and physical Haiti side did well to disrupt the USA’s attacking rhythm and the Americans played an uneven first half.

But in the second half, Lynn Williams, Lindsey Horan and Carli Lloyd all put the ball to the back of the net.

The USA ultimately finished with a 23-3 advantage in shots, 70% possession of the ball and more than double the amount of completed passes (430-205).

The victory launched the U.S. team on its quest to qualify for the 2020 Olympic Games that will be held this July and August in Japan.

After the first round of games in Group A, the USA sits in second place behind Costa Rica on goal difference. Costa Rica defeated Panama, 6-1, in the first game of the day.

The USWNT continues its Olympic qualifying against Panama on Friday, followed by a match against Costa Rica on Monday.

The matches will be broadcast on FOX Soccer Plus and FS1 respectively.

Fans with FS1 level authentication will also be able to watch the game on FOXSports.com and the FOX Sports app.