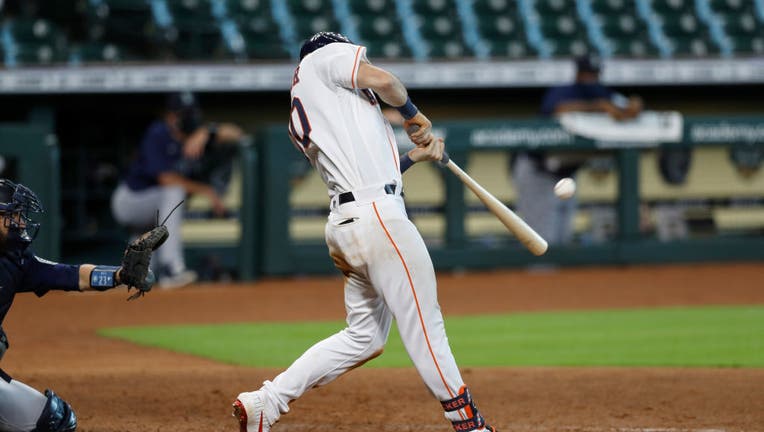 HOUSTON - Kyle Tucker hit a game-ending homer in the ninth inning, and the Houston Astros beat the Seattle Mariners 3-2 on Sunday for their fourth straight win.

Houston also got a terrific effort from its bullpen in its fifth win in six games overall. The Astros won for the 24th time in their last 26 games against the Mariners.

Seattle wasted a solid performance by Justus Sheffield, who allowed one earned run and six hits in six innings. Kyle Lewis had two hits and drove in a run.

Houston jumped in front when George Springer drove in Abraham Toro with an opposite-field single in the second.

Seattle responded with two in the third. Joseph Odom got his first career hit with an RBI single just under the glove of first baseman Yuli Gurriel, driving in Evan White. Odom scored on Lewis' single.

Astros catcher Martin Maldonado, who turned 34 on Sunday, singled in Tucker in the fourth, tying it at 2.

McCullers allowed three hits and walked three in 5 2/3 innings. He has allowed just two runs and four hits over 12 1/3 innings in his last two starts after being tagged for eight runs in 3 1/3 innings in a shaky performance at Arizona.

Houston third baseman Alex Bregman reached for the 21st straight game with a single in the first. Dating to last season, his on-base streak of 37 games is the MLB's longest active streak.
The Mariners have lost five straight.

TRAINER'S ROOM
Mariners: LHP Yusei Kikuchi, who was scratched from his scheduled start on Friday with neck spasms, is feeling much better and likely will make his next start in the rotation rather than rush back and risk additional injury, manager Scott Servais said.

Astros: DH Yordan Alvarez was scratched with right knee discomfort. Alvarez made his 2020 debut on Friday after recovering from COVID-19, homering in his first at-bat. ... After placing OF Michael Brantley (right quad) on the 10-day injured list, the Astros recalled INF Jack Mayfield from their alternate training site.

UP NEXT
Mariners: RHP Justin Dunn (1-1, 4.85 ERA) is scheduled to make his fourth start of the year on Monday against the Dodgers.

Astros: RHP Brandon Bielak (2-0, 1.76 ERA) will start Monday against Colorado. The rookie has allowed just three earned runs in the first 14 1/3 innings of his career.