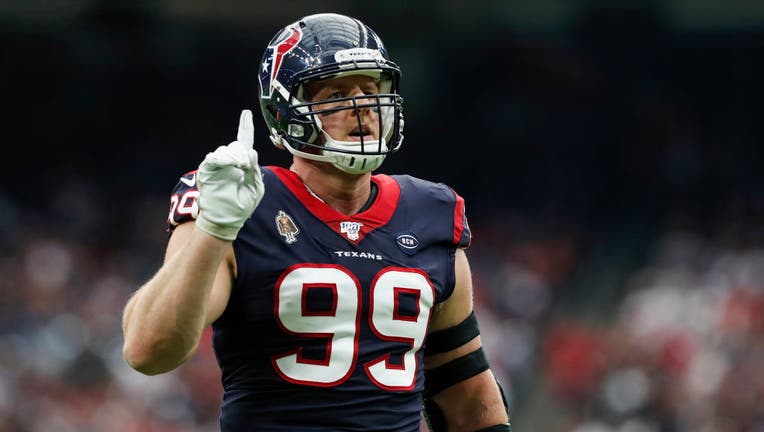 HOUSTON, TX - OCTOBER 27: J.J. Watt #99 of the Houston Texans reacts after batting down a pass in the first half against the Oakland Raiders at NRG Stadium on October 27, 2019 in Houston, Texas. (Photo by Tim Warner/Getty Images) ( Getty Images )

HOUSTON (AP) - Houston Texans defensive end J.J. Watt sustained a shoulder injury on Sunday against the Oakland Raiders. He is now out for the season.

This game can be beautiful and it can also be brutal. Absolutely gutted that I won’t be able to finish the season with my guys and give the fans what they deserve. I truly love this game and can’t stand letting you guys down. Thank you for all of the thoughts & well-wishes.

Watt took to Twitter Sunday, saying, "I truly love this game and can't stand letting you guys down."

It was unclear how Watt, a three-time NFL Defensive Player of the Year, was injured, but he went to the locker room with about 5 ½ minutes left in the second quarter after spending a few minutes in the medical tent. The team announced just before the start of the second half that he wouldn't return, but they did not specify which shoulder he injured.

Watt had three tackles, including one for a loss, and swatted down a pass before he was injured.