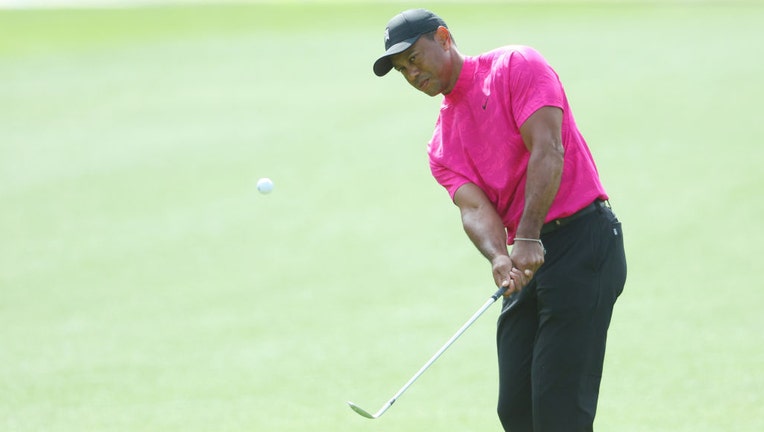 Tiger Woods plays his shot on the first hole during the first round of the Masters at Augusta National Golf Club on April 07, 2022 in Augusta, Georgia. Andrew Redington/Getty Images

AUGUSTA, Ga. - Tiger Woods had some good moments, some unlucky outcomes and a couple of blunders in his opening round of the Masters.

Given what he’s gone through over the last 17 months or so, he surely wasn’t going to complain.

Thursday’s opening round at Augusta National was Woods’ first competitive round of golf against the world’s best players since he played the final round of the pandemic-delayed Masters on Nov. 15, 2020.

The final numbers Thursday: three birdies, two bogeys in a 1-under par round of 71. 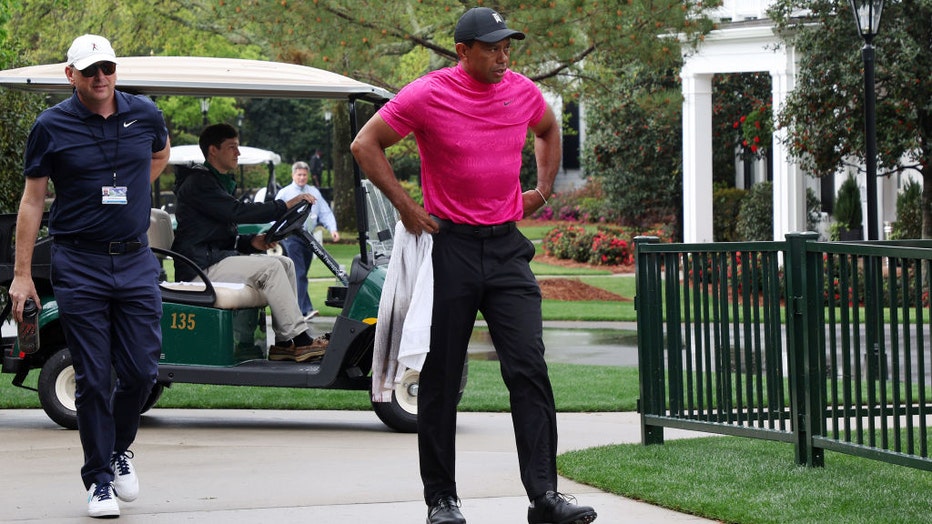 Tiger Woods arrives to the course during the first round of the Masters at Augusta National Golf Club on April 07, 2022 in Augusta, Georgia. Jamie Squire/Getty Images

Dressed in a pink shirt and black pants, the five-time Masters champion went through his routine of putting, chipping and swinging to get ready for his first competitive round of pro golf since Nov. 15, 2020 — also at Augusta National. That was the final round of the Masters, delayed that year because of the pandemic.

Cameron Smith ended Round 1 of the Masters the way he started it.

With a double bogey.

Brilliant for much of Thursday's opening round at Augusta National, Smith settled for a 4-under round of 68 after his drive on the par-4 finishing hole headed toward trees on the right side and started quite a finishing adventure. He wound up three-putting for double, falling into a tie at that point with Sungjae Im for the Masters lead.

From holes 2 through 17, it was nothing but birdies and pars for Smith — 8 birdies, 8 pars in that stretch. He made four birdies in five holes from Nos. 12 through 16, at one point opening up a three-shot lead.

Paul Casey has withdrawn from the Masters.  Casey had been dealing with back spasms this week and told Augusta National on Thursday morning that he would be unable to play.

He was to have played in the 10:53 a.m. tee time with Bryson DeChambeau and Cameron Smith.

Casey has played the Masters 15 times. His best finish was a tie for fourth in 2016.

In the very early going at the Masters, there was a three-way tie for the lead. Padraig Harrington, Guido Migliozzi and Min Woo Lee were all 1 under, all still playing the front side of Augusta National.

RELATED: Tiger Woods: A look at the long road back to the Masters following car crash

Jose Maria Olazabal made the first birdie of this year's tournament. Olazabal is a two-time Masters champion and is playing the tournament for the 33rd time. His approach on the par-4 opening hole settled along the right side of the green and he rolled in the putt.

Olazabal was playing in the first group of the day at 8:30 a.m.

RELATED: Tiger Woods plans to play in The Masters 'as of right now'

Player, the three-time Masters champion who has long been an advocate of physical fitness, was first to play. And Watson, part of the ceremony for the first time, couldn't resist having a little fun with Player as he headed to the tee.

Nicklaus, the six-time champion, was next to play, quipping that he would be surprised if he could put the tee in the ground without falling over. "Yes! It was successful," he said, drawing more laughter.

And then the stage was set for Watson, who won the first of his two green jackets 45 years ago. He tipped his cap when his introduction from Augusta National chairman Fred Ridley was complete, then asked if he could say a few words.

Watson is now the 11th person to have served as an honorary starter at the Masters. After he swung away, he joined Nicklaus and Player for an embrace.

The sun is out at Augusta National. The wind is also up.

Just as forecasters said would be the case, morning clouds and a bit of drizzle blew away from the Masters early in the opening round of the tournament on Thursday.

But with the sun also came wind, perhaps some of the stiffest breezes yet this week.

"We all know how difficult the golf course is when the wind blows here," two-time Masters champion Jose Maria Olazabal said. "And it’s true that the greens are soft and that will make things a little bit easier, but I think Augusta is playing tough."