ARLINGTON, Texas - Ezekiel Elliott scored the go-ahead touchdown with 41 seconds remaining, and the Dallas Cowboys avoided a major upset with a 27-23 victory over the hapless Houston Texans on Sunday.

Houston (1-11-1) appeared in position to end a seven-game losing streak after Dak Prescott’s interception inside the Dallas 10 with 5:37 to go and the Texans leading by three.

The Cowboys (10-3) stiffened against a makeshift Texans offense, stuffing backup quarterback Jeff Driskel on a fourth-down run to give Prescott another shot starting just outside his own goal line.

The star quarterback delivered the second time, starting with a 21-yard completion to Dalton Schultz from the 2 on first down. Another 18-yarder to Schultz put Dallas at the Houston 4.

After Michael Gallup’s attempted TD catch was barely broken up, Elliott scored on third down from the 2 to cap the 98-yard, 11-play drive.

Tony Pollard scored twice for Dallas, which was a 16 1/2-point favorite, according to FanDuel Sportsbook. The Cowboys stayed two games behind NFL-leading Philadelphia in the NFC East. 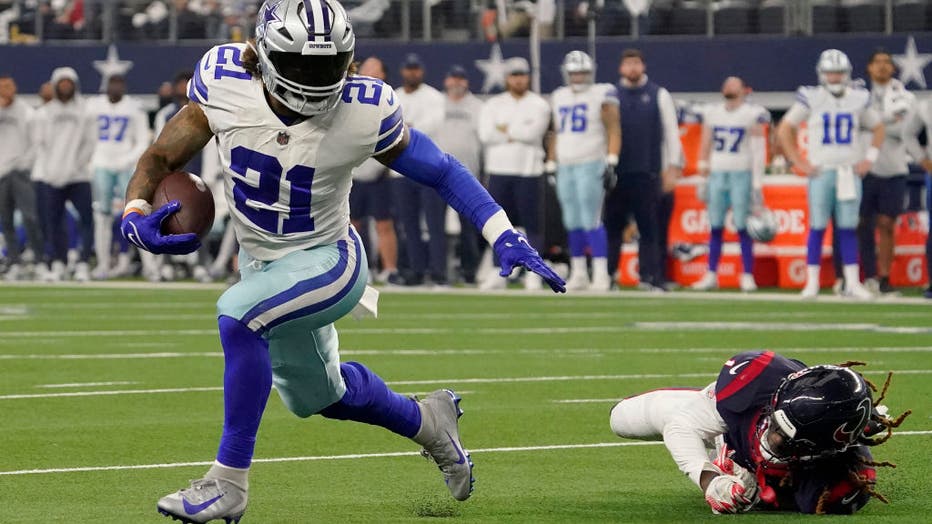 ARLINGTON, TEXAS - DECEMBER 11: Ezekiel Elliott #21 of the Dallas Cowboys runs with the ball in the fourth quarter a game against the Houston Texans at AT&T Stadium on December 11, 2022 in Arlington, Texas. (Photo by Sam Hodde/Getty Images)

After going back to Davis Mills as the starter following a two-game benching, the Texans threw in a wrinkle with Driskel offering a hybrid wildcat/throwing role that included his first TD pass since 2020. Kyle Allen, the replacement for Mills the previous two games, was inactive.

Prescott directed the rally after throwing nine interception in his first eight games of a season for the first time. The first of his two in this game helped the Texans to a rare halftime lead, 20-17.

KaVontae Turpin muffed a punt after the Cowboys opened the game by breezing down the field to a 7-0 lead on Pollard’s first touchdown before forcing a three-and-out.

Taking over at the Dallas 24-yard line, the Texans showed the first wrinkle in the offense by bringing out Driskel. He ran once and threw once to start a sequence that ended with rookie Dameon Pierce’s 1-yard scoring run.

Driskel’s TD pass — a 28-yarder on the run for Amari Rodgers’ first career score — came after Prescott’s first interception and put the Texans up 17-14 late in the first half.

Houston stuffed Elliott on fourth-and-goal from the 1 with Dallas in position to retake the lead after Pierce’s fumble in the third quarter.

Pierce’s 24-yard run helped set up Ka’imi Fairbairn’s third field goal, a 54-yarder for a 23-17 lead. Brett Maher’s 53-yard kick early in the fourth got Dallas back within three.

Pollard’s 12 touchdowns this season are one more than the combined total of his first three seasons. He had rushing and receiving TDs in the same game for the first time.

Texans: CB Steven Nelson injured an ankle in the first half and didn’t return. ... WR Jalen Camp had an oblique injury.

Texans: Patrick Mahomes is set to play in his home state when Kansas City visits Houston next Sunday.

Cowboys: Three of the final four regular-season games are on the road, starting next Sunday at Jacksonville, the only of the remaining opponents currently without a winning record.