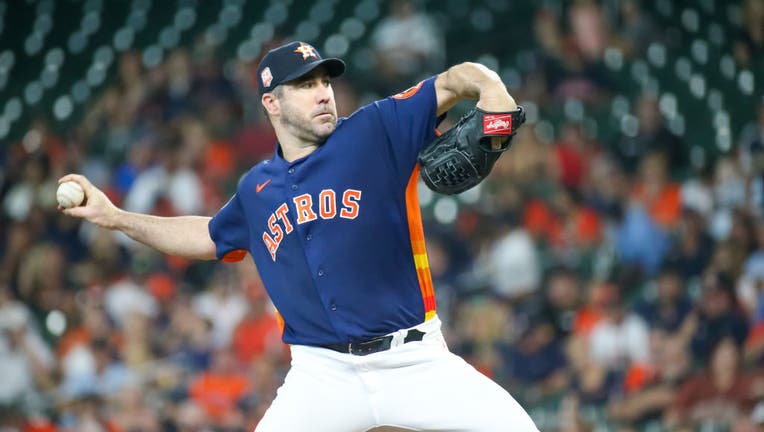 HOUSTON, TX - AUGUST 28: Houston Astros starting pitcher Justin Verlander (35) throws a pitch in the top of the third inning during the MLB game between the Baltimore Orioles and Houston Astros on August 28, 2022 at Minute Maid Park in Houston, Texas

HOUSTON - Houston Astros ace Justin Verlander, a leading candidate for the AL Cy Young Award, has been placed on the injured list with a right calf injury.

The team announced the move Tuesday and said that an MRI done on the calf Monday revealed fascial disruption, but no muscle fiber disruption.

Verlander’s stint on the injured list is retroactive to Monday. He was injured in his start Sunday while going to cover first base during a rundown in the third inning against the Orioles.

The right-hander lowered his major league-leading ERA to 1.84 by throwing three scoreless innings before his exit Sunday.

The 39-year-old Verlander returned this season after missing almost two seasons following Tommy John surgery. Entering Sunday’s matchup with the Orioles, he was 8-0 with a 1.35 ERA in his last 10 starts.

Verlander’s 16 wins are tied with Atlanta’s Kyle Wright and Los Angeles Dodgers right-hander Tony Gonsolin for most in the majors.