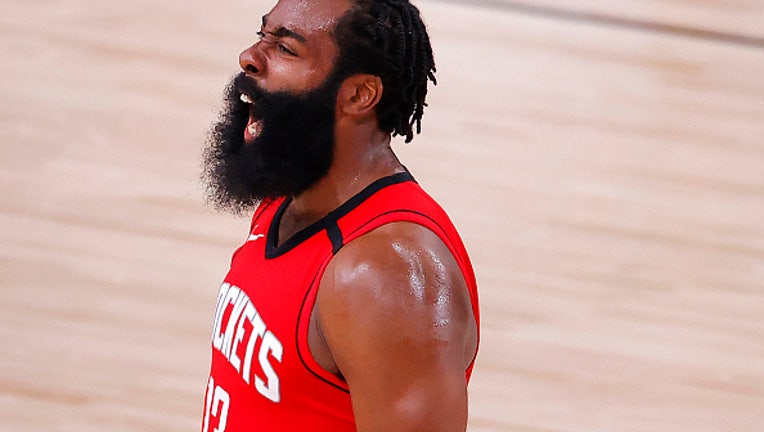 LAKE BUENA VISTA, FLORIDA - AUGUST 20: James Harden #13 of the Houston Rockets reacts to his three point basket during the fourth quarter against the Oklahoma City Thunder in Game Two of the Western Conference First Round during the 2020 NBA Playoffs

LAKE BUENA VISTA, Fla. - James Harden had 21 points and nine assists and the Houston Rockets made 19 of an NBA-record 56 3-point attempts to beat the Oklahoma City Thunder 111-98 on Thursday for a 2-0 lead in the first-round Western Conference series.

Former Thunder star Russell Westbrook was out for the Rockets again with a right quad strain, but plenty of other Houston players picked up the slack. Danuel House Jr. scored 19 points.

The Rockets went on a 13-0 run early in the second half to regain the lead. Gilgeous-Alexander, who had been cold in the bubble, made three straight 3-pointers to highlight an 11-0 run that put the Thunder ahead again. The Thunder held on and led 78-77 at the end of the third quarter.

Oklahoma City led 80-77 before the Rockets broke away with a 17-0 run, with just two of the points coming from Harden, the league scoring champion.

TIP-INS
Rockets: Made 8 of 16 3-pointers in the first quarter, but just 2 of 19 in the second. ... Took 10 shots inside the 3-point line in the opening period. ... Harden had five assists in the first quarter. ... Did not have a turnover in the first half.
Thunder: G Lu Dort returned to the starting lineup after missing Game 1 with a right knee sprain. He scored eight points in 25 minutes. ... Had nine turnovers in the third quarter.

UP NEXT
Game 3 is Saturday.