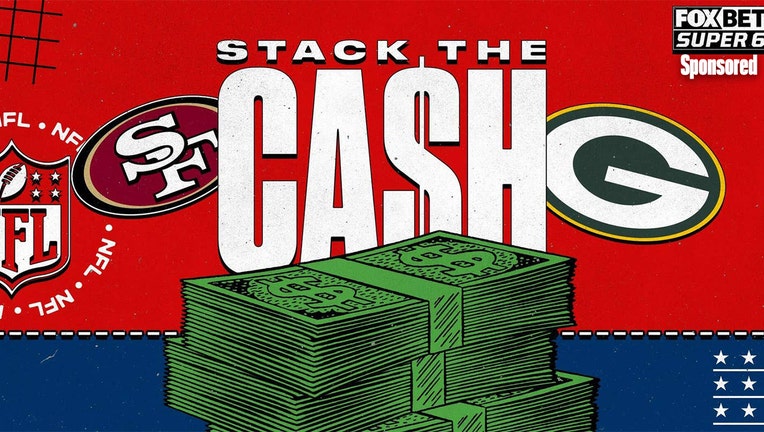 What a time to be a football fan! The playoff field is narrowing, the Super Bowl is just weeks away — and best of all, FOX Bet Super 6's "Stack the Cash" promotion is back for the NFL divisional round matchup between the San Francisco 49ers and Green Bay Packers!

In case you didn't play "Stack the Cash" earlier this NFL season, the concept is simple: the more people who enter the Super 6 contest for this weekend's NFL clash, the higher the jackpot climbs! And this week's grand prize, which started at a cool $100,000 of Terry Bradshaw's money, has already climbed to $200,000 and counting!

So, how can you get in on the action? First, if you haven't already, download the FOX Bet Super 6 app. Then, enter Saturday's NFL Divisional Round Stack The Cash Challenge. Make your predictions on six questions about how Saturday's game will play out, then tune in to see if you're right!

But with "Stack the Cash," there's one more step — don't forget to tell your friends, family, neighbors, grocery store cashiers and everyone else to enter and make their picks. Because remember: the more people who enter the contest, the bigger the jackpot will be for whoever takes home the prize.

To help you get to the pay window, here are my thoughts on this week's FOX Bet Super 6 contest.

How many passing yards will Aaron Rodgers have?

It’s no secret the Packers will come out throwing, establish a lead and then salt away the victory on the ground with AJ Dillon and Aaron Jones. What does that mean? Rodgers in two playoff games last season: 296 yards, 346 yards. In the loss to the 49ers in the 2019 NFC title game: 326 yards. The only way he’s not well above 250 is if the 49ers' run game keeps him on the sideline.

The 49ers got a huge lift to their depleted secondary with the return of CB Emmanuel Moseley last week, but he is unlikely to travel with Davante Adams. In the regular season matchup, Adams caught 12 of 18 targets for 132 yards and a touchdown. Adams hauled in passes of 25 and 17 yards on the final game-winning drive.

If the 49ers are unable to get pressure on Rodgers without blitzing — five sacks of Dak Prescott last week was a pleasant surprise — and Nick Bosa isn’t able to go (concussion), it could be a long afternoon for the 49ers.

Which team will have the highest kick return average, and what will that average be?

Rookie Amari Rodgers has taken over kick returns (18.1 yards per return on 11 returns) for the Packers, while the 49ers are expected to get back speedy returner Trenton Cannon from IR. He average 20.5 yards per return. Cannon’s longest of the season happened to come against the Packers (68 yards).

Which team will have the highest punt average, and what will that average be?

Tough to find an edge here, as both have virtually identical stats over the course of the season. One key stat: San Francisco’s Mitch Wishnowsky has struggled on the road, with his average dipping by four yards and not registering one touchback away from Levi’s Stadium.

Which team will make the longest field goal, and how long will it be?

San Francisco kicker Robbie Gould is the slightly better kicker in this matchup, going 20-of-23 this season and hitting 10-of-13 over 40 yards. Mason Crosby is only 7-for-12 on such kicks.  The Packers, with the supremely confident Aaron Rodgers, are much more likely to go for it at home on fourth down in that long-distance field-goal range than trot out Crosby, who has had a fantastic 15-year career with the Packers but has been unreliable this season.

In the battle of two veteran kickers here — and Gould spent a decade with the Bears, so the cold and Lambeau will be no stranger to him — give me Kyle Shanahan's squad attempting and making the longest kick.

Which team will have the most solo tackles, and how many will they have?

If you take a whack at the game script, start here: The 49ers plan to run the ball, then run some more, and chase it down with more running. And when Jimmy G does pass, it’s mostly short stuff to let the likes of Aiyuk and Deebo get the yards after catch.

So the smart money would seem to be on the Packers, with one of three players leading the way in solo tackles: linebacker De’Vondre Campbell and safeties Darnell Savage and Adrian Amos. Campbell has quietly been one of the best linebackers in the NFL, grading out as No. 2 per Pro Football Focus. He was tied for third in the NFL in solo tackles with 102, and in the earlier meeting with the 49ers, he registered six. That was as many as Savage and one more than Amos.

If the 49ers control the clock with a ground game that has given the Packers fits, that sets the Packers up for a number in the low 40s. If you think the 49ers get blown out, as the rested Packers did to the Rams last year in this spot, then a tie isn’t the worst pick in the world.

Which team will win and by how many points?

The mysterious injury designation of Jimmy Garoppolo (shoulder, hand) makes this a cloudy situation. The Packers' run defense may have not given up many yards this season (sixth fewest), but that’s because the Packers were always in the lead, and the opposing team was passing. In fact, the Packers are one of six teams to not give up a 40-yard carry this season!

Kyle Shanahan taught Mike LaFleur everything he knows, but ultimately this comes down to Aaron Rodgers.

Play FOX Super 6 every week for your chance to win thousands of dollars, including the "Stack the Cash" NFL Divisional Round Challenge and many more contests. Just download the FOX Bet Super 6 app and make your picks today!