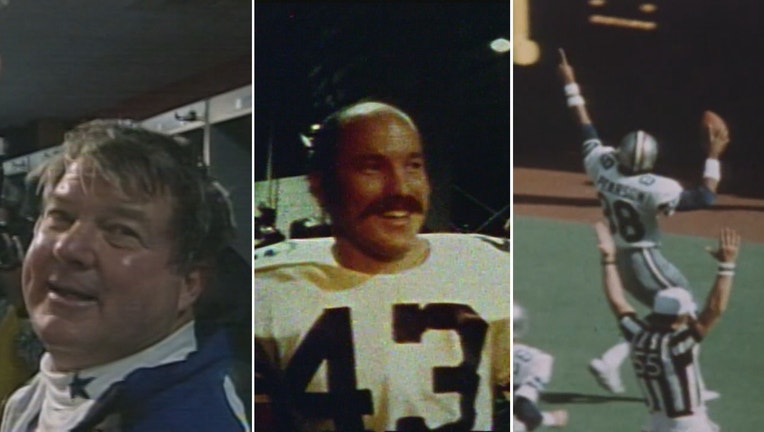 OXNARD, Calif. - Before the NFL Hall of Fame honors Cowboys legends this weekend, this year’s team takes the field.

The Hall of Fame game Thursday night between the Cowboys and Steelers will happen without quarterback Dak Prescott.

In fact, several of the team’s regulars stayed back in Oxnard, California. That’s not unusual for this type of game.

The telecast should still be fun with fans hearing from a lot of the guys who’ll be going into the hall this weekend.

Two classes go in including the Centennial Class of 2020, which had to wait a year and a half after the announcement because of COVID-19.

And who could forget the night that former Cowboys Coach Jimmy Johnson learned live on FOX that he’d gotten the call to Canton.

"All the assistant coaches who worked for me, all the great players who played for me, they’re the reason I’m here," he said.

Johnson could barely talk. Troy Aikman could barely hold back the tears from the broadcast booth as he watched his former coach get the good news.

On Saturday night, Aikman will introduce Johnson for his induction into the Pro Football Hall of Fame.

"It’s the greatest honor I could have received for someone to ask you to present them in the Hall of Fame. It's a bigger honor. I don't take lightly me going into the Hall of Fame, but it's a bigger honor to me personally than even when I went because that person can choose anybody he wants. So, it meant a lot and Jimmy and I, we've been through a lot as well during my playing career and we've become really close friends over the years. And for him to want me to be the one to present him is like I said it's just the highest honor I've ever had," he said.

Then there’s Cliff Harris, one of pro football’s all-time great safeties. His longtime running buddy in the secondary Charlie Waters will be his presenter.

Harris was first eligible to get into the Hall of Fame 36 years ago. He was voted into that Centennial Class of 2020 back in 2020.

Pearson waited 33 years. The senior committee voted him in as part of the Class of 2021.

Harris and Johnson will be inducted on Saturday and Pearson on Sunday.

Coverage of both the game and the induction will be on FOX 4.