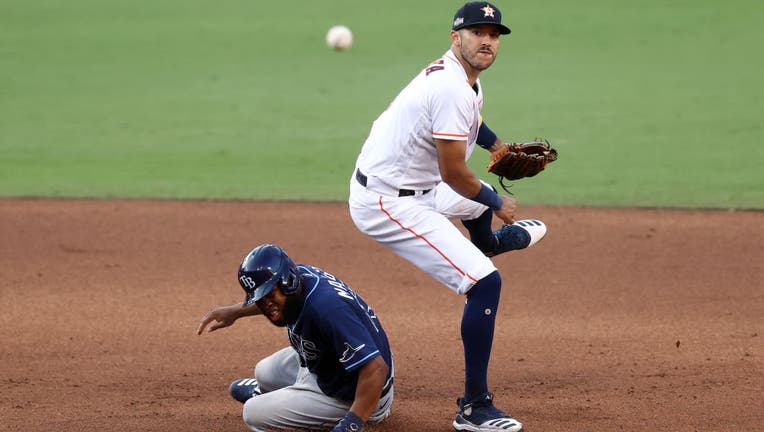 SAN DIEGO, CALIFORNIA - OCTOBER 15: Carlos Correa #1 of the Houston Astros turns a double play as Manuel Margot #13 of the Tampa Bay Rays is out at second during the eighth inning in Game Five of the American League Championship Series at PETCO Park

SAN DIEGO - The Houston Astros are keeping that winning momentum going as they won another close game against the Tampa Bay Rays on Thursday afternoon.

The game, which was another must-win for the Astros, ended by a final score of 4-3.

The Astros got the scoring started early with a solo home run by George Springer in the bottom of the first inning.

Then in the bottom of the third inning, with the score tied 1-1, Michael Brantley singles on a sharp line drive to right field scoring Josh Reddick and Martin Maldonado.

In the top of the fifth, Tampa Bay’s Randy Arozarena knocked a solo home run to right-center field.

By the top of the eighth inning, the Astros lead was gone as the Rays’ Ji-Man Choi knocked another solo home run to right-center field.

But in the bottom of the ninth, Carlos Correa knocks a solo home run.