ATLANTA - The Astros are in Atlanta for Game 3 of the World Series.

Friday night they faced off against Ian Anderson and the Braves at Truist Park to see who will lead the series that's currently tied 1-1. 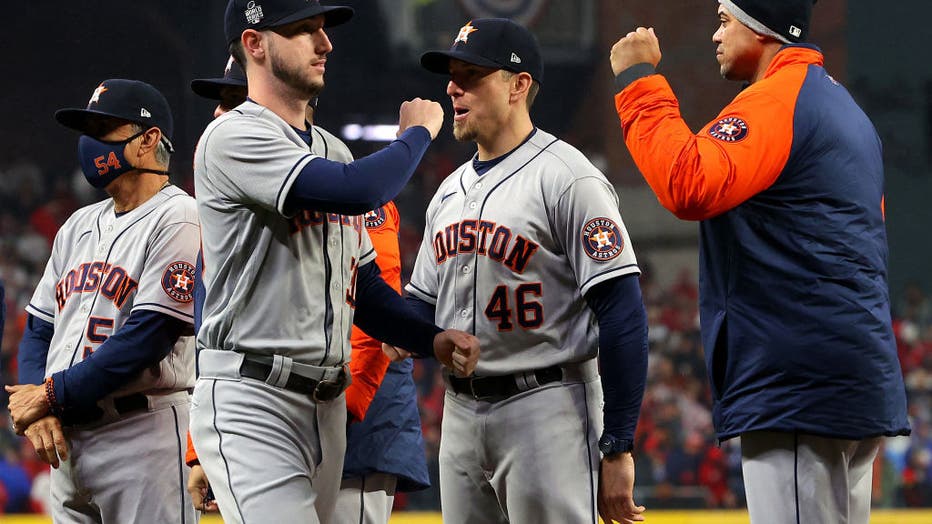 ATLANTA, GEORGIA - OCTOBER 29: Kyle Tucker #30 of the Houston Astros is introduced prior to Game Three of the World Series against the Atlanta Braves at Truist Park on October 29, 2021 in Atlanta, Georgia. (Photo by Kevin C. Cox/Getty Images)

World Series watch parties at Minute Maid Park: How to get a voucher

Houston won the last meeting 7-2. Jose Urquidy earned his first victory this postseason and Jose Altuve went 2-for-5 with a double, a home run, and an RBI for Houston. Max Fried registered his second loss of the postseason for Atlanta.

Houston has a team batting average of .276 this postseason, Yordan Alvarez has led them with an average of .410, including eight extra-base hits and nine RBIs.

Kyle Tucker leads the Astros with 70 extra-base hits and is batting .295.

As Game 3 of the World Series between the Astros and the Braves makes its way in Atlanta, FOX 26's Gabby Hart decided to have a little fun with some of the local fans.

Atlanta has a team on-base percentage of .317 this postseason, Eddie Rosario leads them with an OBP of .471, including six extra-base hits and 11 RBIs.

Adam Duvall leads the Braves with 38 home runs and has 113 RBIs.

Altuve led the lineup for batting while Ian Anderson pitched for the Braves. The crowd screamed "cheater" in reference to the World Series scandal after three balls and a second strike before taking a walk. Michael Brantley came up to bat next, grounding a double play, bringing pitcher to shortstop at first and Altuve out at second. Alex Bregman next up had to walk as well. Alvarez stepped up to the plate next, hitting a flyball into the left but it was caught by Rosario. 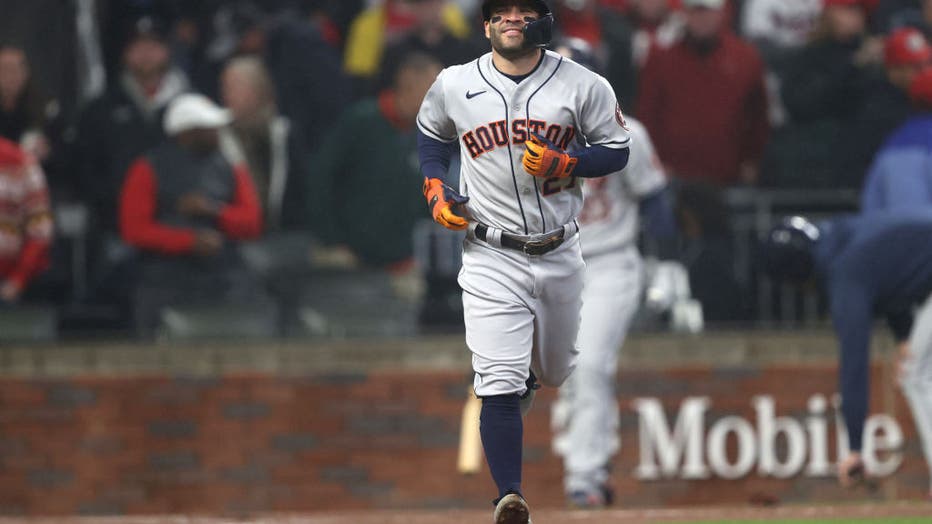 ATLANTA, GEORGIA - OCTOBER 29: Jose Altuve #27 of the Houston Astros draws a walk against the Atlanta Braves during the first inning in Game Three of the World Series at Truist Park on October 29, 2021 in Atlanta, Georgia. (Photo by Elsa/Getty Images

At the bottom of the first, Luis Garcia pitched to Rosario, whose biggest game was on the road in Boston against the Red Sox, putting that series in favor of Houston. Rosario popped it down the line initially, and Alvarez nor Bregman were able to get to it in time. Ultimately, he was struck out though, leaving it up to Freddie Freeman, who flied it out to left but was caught by Alvarez. Next up was Ozzie Albies, who walked after a 3-2 pitch. Austin Riley came up to the plate but struck out. No team scored in the first inning. 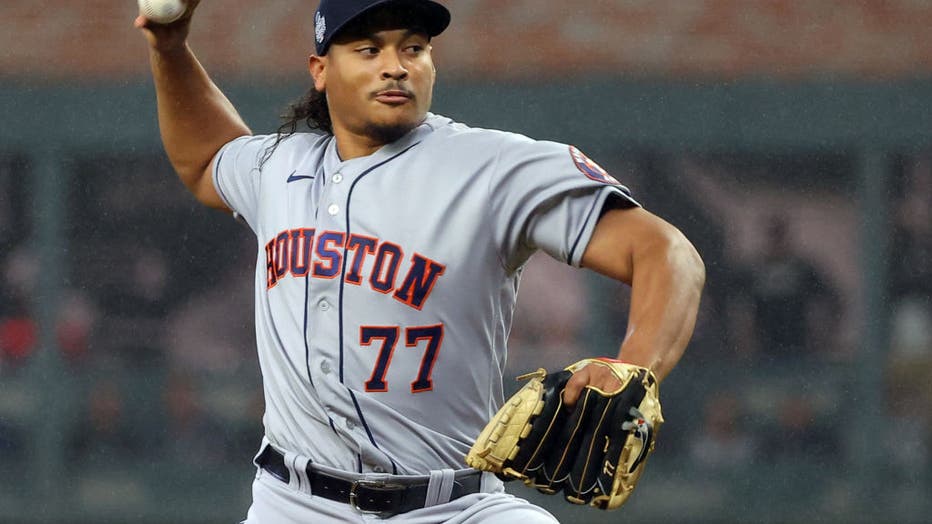 ATLANTA, GEORGIA - OCTOBER 29: Luis Garcia #77 of the Houston Astros delivers the pitch against the Atlanta Braves during the first inning in Game Three of the World Series at Truist Park on October 29, 2021 in Atlanta, Georgia. (Photo by Kevin C. Co

Anderson returned to pitching with Correa this time up for the Astros at the top of the second inning. Correa flies one out to right but the ball is caught by Jorge Soler. Kyle Tucker follows afterward and is fouled out to third. Yuli Gurriel up next strikes out immediately after his turn. At the bottom of the second, Garcia returned to pitching this time against Soler, who fouled before striking out, thereby making it the third strikeout for Game 3. Up next was Adam Duvall, who grounded out to third after the ball was caught by Bregman. Travis d'Arnaud stepped up to the plate next, who got a two-out double to the right but was caught by Brantley. By this time, the wet soil was visibly uncomfortable at the pitcher's mound, as Garcia had to adjust himself a few times, especially due to his recovering knee injury. Dansby Swanson was next, but an intentional walk was handed down, causing Anderson to come up to bat but was struck out swinging. Both teams remain at 0 as the second inning concludes. 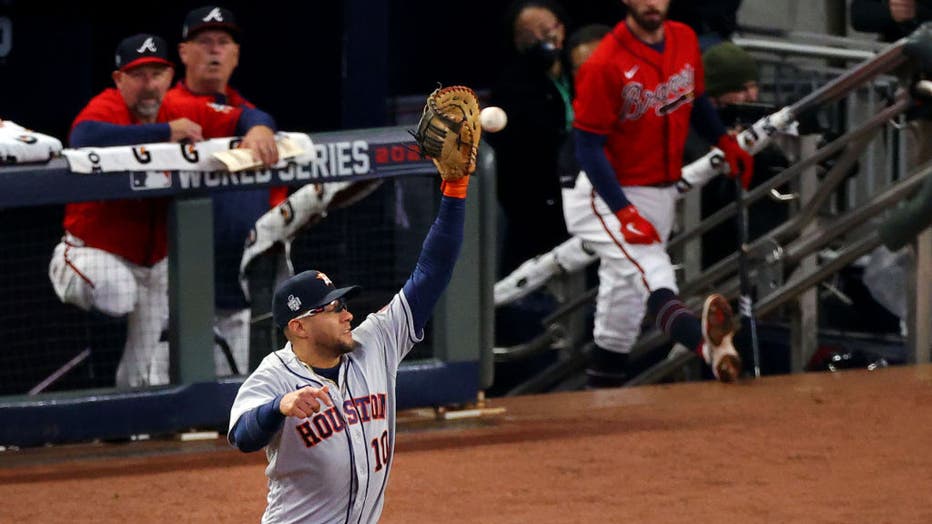 ATLANTA, GEORGIA - OCTOBER 29: Yuli Gurriel #10 of the Houston Astros makes the putout against Adam Duvall (not pictured) of the Atlanta Braves during the second inning in Game Three of the World Series at Truist Park on October 29, 2021 in Atlanta,

Martin Maldonado kicks off the top of the third inning, with Ian Anderson back at the pitcher's mound. Maldonado grounds out to third, and then Garcia grounds out to second. Altuve, came up next but strikes out. This was a stark contrast to the last couple of games, where he went 2-for-5 with a double, a home run, and an RBI for Houston. Back at the pitcher's mound, Garcia, who has been lauded for his delivery throughout the game. Rosario, who was at bat walks and Freddie Freeman returns to the plate and hits a foul to the left. He then singled out to left-center, with Rosario at second. Next up was Albies, who strikes out, making it the fifth strikeout for the Braves in Game 3. Riley hit one down the line, with Rosario scoring the first point of the game and Freeman to third. Braves are now up 1-0 against the Astros. Soler walks after a 3-2 pitch, and Duvall comes up next and the bases are loaded. After an 0-2 pitch, Duvall popped up on the infield. d'Arnaud comes up next with bases still loaded but strikes out swinging. Braves take the slim lead so far in Game 3. 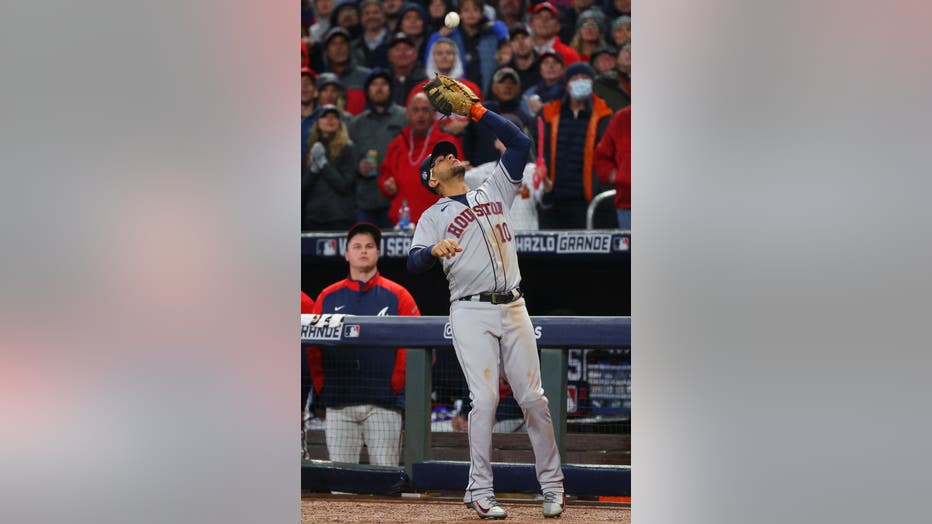 ATLANTA, GEORGIA - OCTOBER 29: Yuli Gurriel #10 of the Houston Astros catches a fly ball against the Atlanta Braves during the third inning in Game Three of the World Series at Truist Park on October 29, 2021 in Atlanta, Georgia. (Photo by Kevin C. C

Ian Anderson returns to pitcher's mound against Brantley, who strikes out after a 3-2 pitch, making it the Astros third strikeout in Game 3. Bregman steps up the plate, who had walked during his first turn at bat but hit one in the shallow right-center, giving him two outs. Alvarez up next and walks after two outs. Correa, who was hit by the pitch, allowing Alvarez to move to second. Tucker back on the plate, grounds out to the pitcher. Astros are still without a hit at the bottom of the fourth. 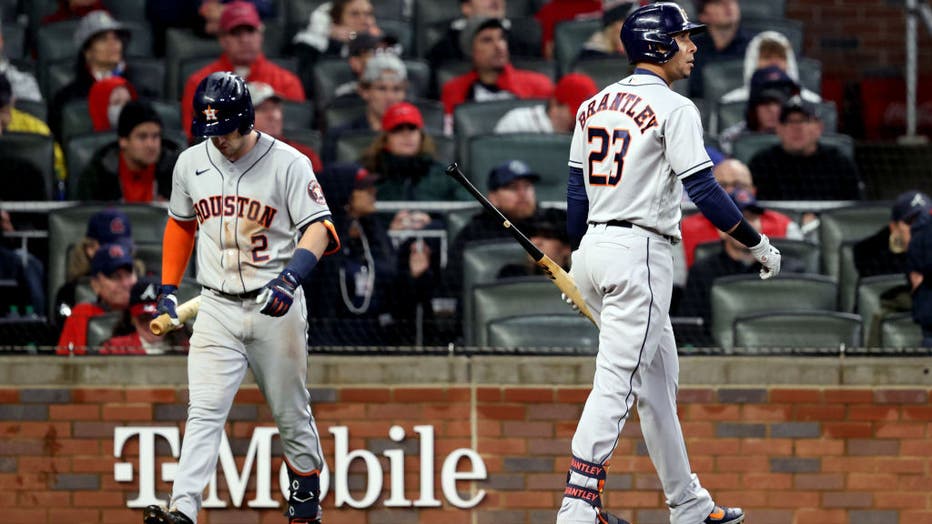 ATLANTA, GEORGIA - OCTOBER 29: Michael Brantley #23 of the Houston Astros reacts after striking out against the Atlanta Braves during the fourth inning in Game Three of the World Series at Truist Park on October 29, 2021 in Atlanta, Georgia. (Photo b

Garcia is back on the pitcher's mound and the first hit is fouled and caught by Maldonado. Anderson next up and his hit lines out to the first base. Garcia is swapped out for lefty Blake Taylor as Rosario returns to bat. Rosario hits a base left after two strikes. Freeman up next is struck out. No score as the fourth inning concludes, but Braves still taking the slim lead 1-0.

Gurriel flies out to the right but is caught with Anderson pitching. Maldonado up next lines out to second, but to no avail. Marwin Gonzalez, who makes his first appearance in the postseason, was struck out looking. The same happens to Gonzalez, who came right afterward. Making it now four strikeouts for the Astros and still no scores. Yimi Garcia steps up to pitch at the bottom of the fifth inning against Albies, who grounds out to first base. Riley up next, also grounds out to first, followed by Soler. He walks after two outs. Duvall hits one on the infield single to shortstop, but the ball is caught by Altuve, moving Soler to second base but no score. d'Arnaud is brought in and after a 1-2 pitch, Astros change up the signs. He takes it to the first and that ends the fifth inning. 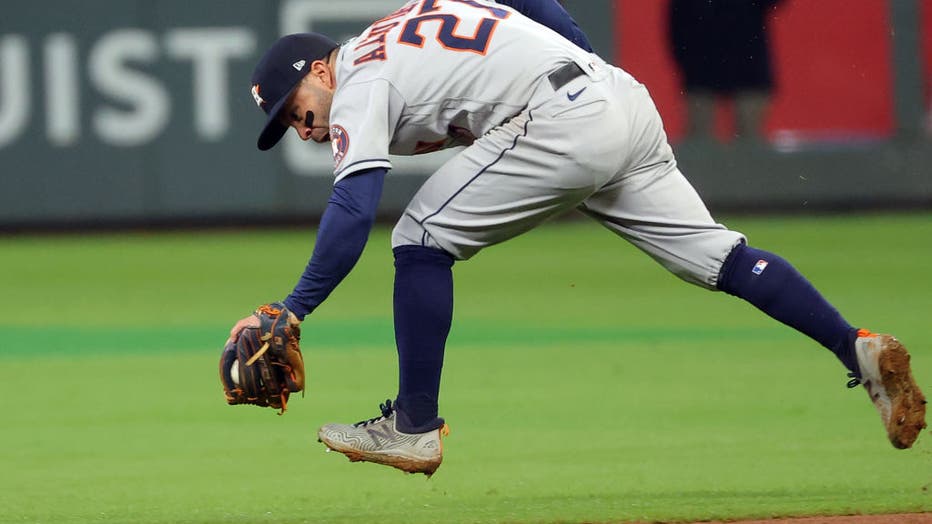 ATLANTA, GEORGIA - OCTOBER 29: Jose Altuve #27 of the Houston Astros fields the ball against the Atlanta Braves in Game Three of the World Series at Truist Park on October 29, 2021 in Atlanta, Georgia. (Photo by Kevin C. Cox/Getty Images)

Altuve kicks off the sixth inning with new pitcher for the Braves, A.J. Minter. He is struck out swinging and Brantley comes to take his place. Brantley grounds out to first and up next is Bregman, who takes a hit to the ankle and is allowed to walk despite there being no protection. 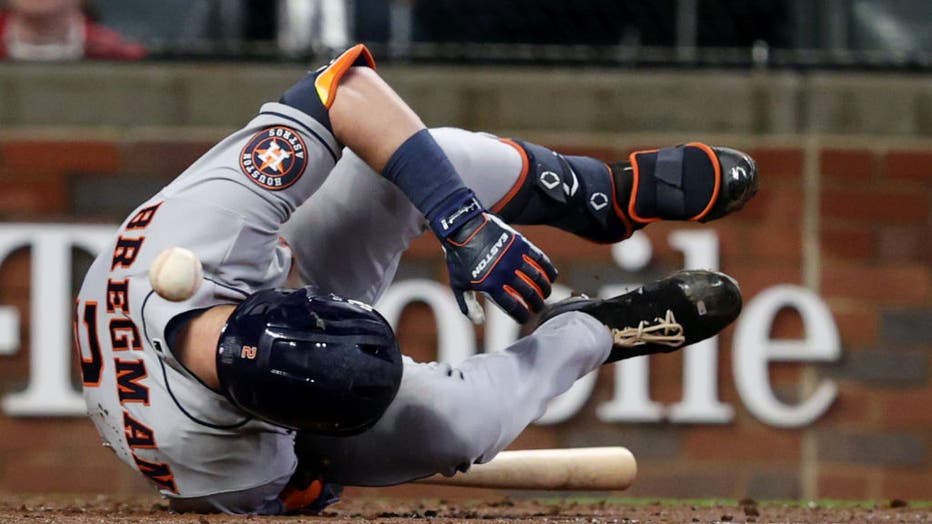 ATLANTA, GEORGIA - OCTOBER 29: Alex Bregman #2 of the Houston Astros is hit by the pitch against the Atlanta Braves during the sixth inning in Game Three of the World Series at Truist Park on October 29, 2021 in Atlanta, Georgia. (Photo by Elsa/Getty

The inning continues with Alvarez but is struck out. Garcia comes up to pitch during the bottom of the sixth inning against Swanson. He flies out to the left but the ball is caught by Alvarez. Ehire Adrianza swaps in for Minter at-bat. After he is grounded out to second, Rosario comes up to the plate, and Garcia is switched out with Brooks Raley. Rosario flies one out to center but is unable to score due to an impressive dive by Kyle Tucker. The score remains unchanged, with Braves clinging to their slim lead, 1-0.

Correa deals with Luke Jackson at the top of the seventh, who is known for his fastballs. He grounds out to second and up next is Tucker, who lines out to center. Gurriel hits the ball to the left side, backing up Riley and a long throw, bouncing it twice before he grounds out to third base. Astros are unable to pick up the game at the top. Freeman is grounded out to shortstop against Raley pitching for the Astros. However, Ryne Stanek is swapped in to pitch and strikes out Riley. Astros are up next with Maldonado at-bat, so hopefully, he can turn things around as the score remains 1-0, with Braves still holding on to their lead. 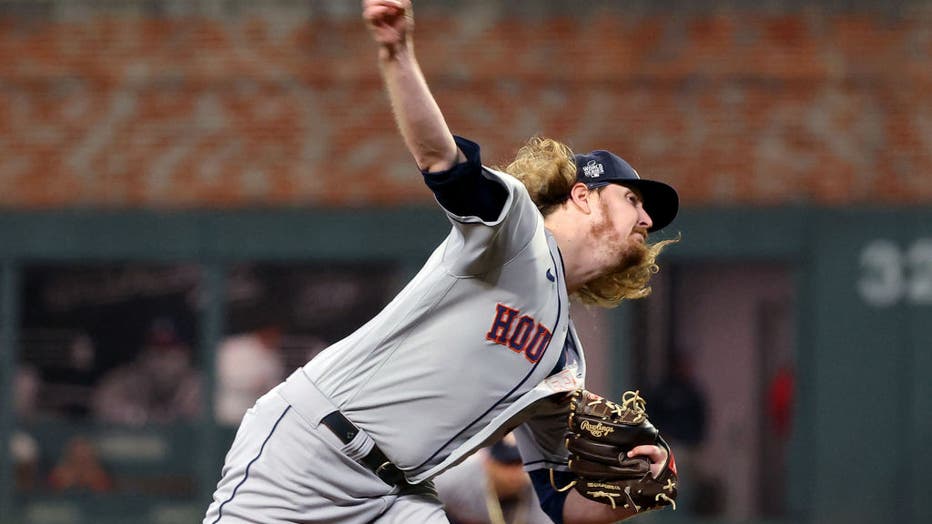 ATLANTA, GEORGIA - OCTOBER 29: Ryne Stanek #45 of the Houston Astros delivers the pitch against the Atlanta Braves during the seventh inning in Game Three of the World Series at Truist Park on October 29, 2021 in Atlanta, Georgia. (Photo by Kevin C.

Maldonado is swapped in to bat for Aledmys Diaz against Tyler Matzek. He hits a single to left, landing in the perfect spot falling between Rosario and Swanson. Jason Castro comes up next while Siri ran for Diaz. Castro strikes out swinging and Altuve steps up to the plate and pops it up, but is found out to third. Brantley stands between Matzek but when Siri goes to steal second, he is found safe at third after an error is made by ‘dArnaud. Bregman’s turn ends after he pops out to third, but the ball is caught by Riley. This concludes the top of the eighth inning, with things not looking any better for the Astros. Kendall Graveman pitching for the Astros at the bottom of the eighth against Soler, who makes a hard hit but a quick play by Correa causes Soler to get grounded out to shortstop. Next up is Duvall, who is struck out swinging. d'Arnaud homers to center, giving the Braves another point, bringing the score to 2-0. Swanson up next is struck out, but score remains in favor of the Braves.

Bregman kicks off the ninth inning against Will Smith and hits a right side, for a lead-off single. Time running out on the plate and things continue looking bleak for the Astros after Alvarez is fouled out to third. Correa steps up to the plate, hoping to turn things around. He hits a fly ball into the right side, but it's caught by Duvall. Next up is Tucker, who hits one in the center but is caught and it's over. Astros lose, 2-0.