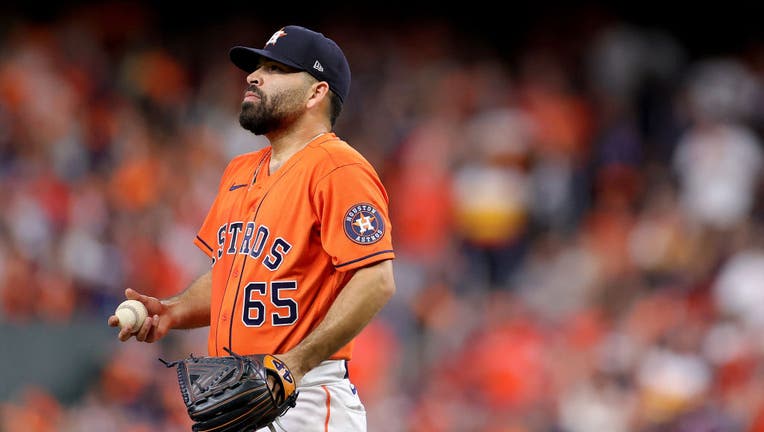 HOUSTON, TEXAS - OCTOBER 27: Jose Urquidy #65 of the Houston Astros reacts during the first inning against the Atlanta Braves in Game Two of the World Series at Minute Maid Park on October 27, 2021 in Houston, Texas. (Photo by Carmen Mandato/Getty Im

HOUSTON - José Urquidy went to the Houston Astros before Wednesday’s World Series start and asked that "El Corrido De Mazatlán," be played as his warmup music instead of "La Casita," the song he had been using.

"Mazatlán, a lot of people come to see me," he said of his Mexican hometown, "and they wanted to hear that music."

He gave his fans a performance to remember, becoming the first Mexican pitcher with two Series wins.

"It means a lot," the 26-year-old right-hander said after striking out seven over five innings in Houston’s 7-2 victory over Atlanta on Wednesday night, which tied the Series at one game apiece. "This is something that I have worked for a long time, when I was a kid, when I play in Mexico. I’m living the dream."

RELIVE GAME 2 OF THE WORLD SERIES

Looking calm and poised a night after overamped rotation-mate Framber Valdez was chased early, Urquidy gave the Astros’ bats a chance to break out for a 5-1 lead with a four-run second inning.

Urquidy beat Washington in Game 4 two years ago with five scoreless innings of two-hit ball. The Dodgers’ Fernando Valenzuela (1981), Detroit’s Aurelio López (1984) and the Dodgers’ Víctor González (2020) are the only other Mexican pitchers with World Series wins.

"I know there’s a lot of Mexican people that in the stands tonight, that are there supporting me," Urquidy said. "It makes me feel even more motivated and focused knowing that I have to do a good job, and it makes me proud to represent the country that I’m from."

Urquidy started Eddie Rosario with strikes opening the game. Five of them in a row.

FOX 26’s Matthew Seedorff catches up with Houston Astros fans after an electric Game 2 against the Atlanta Braves, evening up the series 1-1.

Sometimes Urquidy thinks he throws too many strikes.

"I work first of all, obviously, to try to get ahead in the count and to try to get to two strikes," he said through a translator, switching with ease between English and Spanish. "I feel like when my body’s in rhythm and I’m going well and throwing everything right towards the catcher, sometimes it can be difficult for me to throw pitches outside the zone."

Urquidy rebounded from his Game 3 loss at Boston in the AL Championship Series, when he got just five outs in a 12-3 defeat on Oct. 18.

He started 15 of 21 Braves batters with strikes. He allowed two runs and six hits with no walks, throwing 55 of 74 pitches for strikes.

"We had to keep a close eye on him because he’s really still just getting into shape because he was out a long time in between starts," Astros manager Dusty Baker said. "So we knew that we had to watch him around 75 to 80 pitches."

World Series watch parties at Minute Maid Park: How to get a voucher

"He was locating his pitches, keeping us off balance," d’Arnaud said. "We knew he was going to be a strike thrower, and he went out there and pitched a great game."

Urquidy’s Series win two years ago was at Nationals Park. At Minute Maid Park, he felt more at home.

"It’s really special for me," he said. "It means a lot and makes me very happy, just to be able to hear the music they put on for me."

You just never know what you’ll find at a Houston Astros game and in 2014, fans were thrown for a loop when they saw the mascot Orbit get served by a dancing security guard.