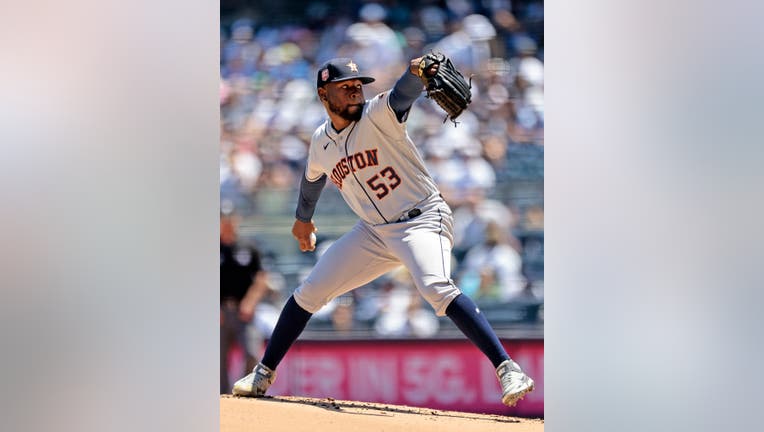 NEW YORK, NY - JUNE 25: Cristian Javier #53 of the Houston Astros throws a pitch in the bottom of the first inning against the New York Yankees at Yankee Stadium on June 25, 2022 in the Bronx borough of New York City. Javier threw seven innings as pa

NEW YORK (AP) - Cristian Javier kept sending the New York Yankees back to their dugout in short order, taming his often inconsistent control and thwarting the team with baseball’s best record, most runs and preeminent power.

"We call him ‘The Reptile,’ because he doesn’t show any emotion. It doesn’t matter how big the stage," Houston catcher Martín Maldonado would later say.

The Astros’ cold-blooded starter combined with Héctor Neris and Ryan Pressly on the first no-hitter against the Yankees in 19 years, pitching Houston to an improbable 3-0 victory Saturday. It’s the first time New York has been no-hit since six Astros teamed up for one at the old stadium on June 11, 2003.

New York entered 52-19, at .732 the best winning percentage ever for a team held hitless at least 50 games into a season. The previous high was Oakland’s .691 against Texas on June 11, 1990, when the Athletics were felled by Nolan Ryan’s sixth no-hitter.

"The cold, hard truth is we got outpitched and outplayed," Yankees pitcher Gerrit Cole said. "Magical day for them."

Javier (5-3), a 25-year-old right-hander without a complete game in 84 professional starts, was in the rotation because Jake Odorizzi is hurt. He set career highs for strikeouts (13) and pitches (115) while walking one, and he matched his longest start with seven innings. Javier lowered his ERA to 2.73.

He walked Josh Donaldson on a full-count fastball with two outs in the first, then retired 17 in a row until Donaldson reached when third baseman Alex Bregman threw past first for an error on a one-out grounder in the seventh. Stanton took a called third strike and Gleyber Torres struck out swinging.

By the sixth, the Astros adopted the superstitious dugout custom for a no-hit bid.

"The guys didn’t come near me, and I didn’t go near them," Javier said through a translator.

"Man, I got to make a decision here pretty soon between the personal and maybe him suffering for it," Baker recalled. "How many does he have left?"

Javier needed 24 in the inning, starting his last five batters with a ball after getting ahead with a strike to 12 of his first 18.

Baker gave Javier a hug when he was done.

"In the bullpen today before the game, pitches were doing what I wanted," Javier said.

Neris walked two in the eighth, retired Joey Gallo on a flyout to the right-field warning track and got Aaron Judge to ground into an inning-ending forceout.

Pressly struck out Anthony Rizzo and Donaldson in the ninth, then retired Giancarlo Stanton on a game-ending groundout to third that sparked groans in the crowd of 45,076 on the sunny summer afternoon. It was his first outing since giving up a tying three-run homer to Aaron Hicks in a 7-6 loss Thursday night,

"I was pretty upset with myself and felt like I let the team down," said Pressly, who got his 15th save in 18 chances.

Houston players gathered near the mound for a brief celebration. Justin Verlander presented Javier with the ball from the final out.

In a matchup of the teams with the top two records in the American League, Houston got the first hit in the fifth, and rookie J.J. Matijevic put the Astros ahead in the seventh with second big league homer, driving a fastball from Cole (6-2) into the right-field second deck.

Jose Altuve homered into the left-field second deck in the eighth against Michael King, and pinch-hitter Yuli Gurriel added an RBI single off Lucas Luetge in the ninth.

"Yankee Stadium, day game. These are moments that you live for," Matijevic said after his first career bat flip. He has two hits, both homers.

Maldonado had guided four Astros pitchers through a no-hitter against Seattle on Aug. 3, 2019. This was even more special.

"My dad was here," he said. "Those are memories, they’re going to last through all my life."

This was the third no-hitter of the season: five Mets combined against Philadelphia on April 29 and the Los Angeles Angels’ Reid Detmers pitched one against Tampa Bay on May 10.

New York, which lost consecutive games for the first time since May 28-29 against Tampa Bay, struck out 15 times and got its only runners on three walks and an error. The Yankees were no-hit for just the eighth time, and they haven’t been dominated in that manner by a franchise other than Houston since 1958.

The Astros pitched their 14th no-hitter, the first since Verlander against Toronto on Sept. 1, 2019.

"We’ll just see how we answer in the next few days," Yankees catcher Jose Trevino said. "There’s no certainties in baseball."

Houston’s 150 pitches were one fewer than in the 2003 no-hitter and nine less than the Mets needed in April.

Yankees: After throwing an eight-pitch inning for Double-A Somerset on Friday in his first game action since May 22, LHP Aroldis Chapman (left Achilles tendinitis) expects to pitch again Sunday and then come off the IL. ... RHP Jonathan Loaisiga, sidelined since May 22 by right shoulder inflammation, threw his first bullpen since getting hurt. He will need another bullpen and then batting practice before he goes on a rehab assignment, Boone said. ... Domingo Germán (right shoulder impingement) is to make his second minor league rehab start on Tuesday.