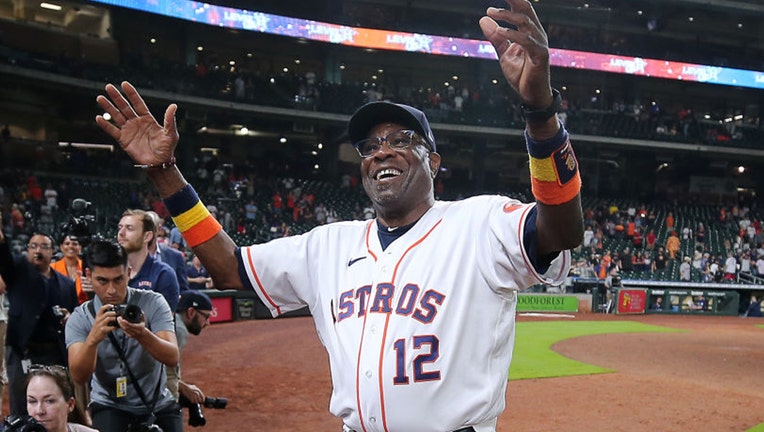 Manager Dusty Baker Jr. #12 of the Houston Astros celebrates his 2000th career win after a game against Seattle Mariners at Minute Maid Park on May 03, 2022 in Houston, Texas. (Photo by Bob Levey/Getty Images)

Houston Astros manager Dusty Baker won his 2,000th game Tuesday night, becoming the 12th manager in major league history to reach the milestone and the first Black man to do it.

The benchmark victory came in Houston’s 4-0 win over the Seattle Mariners and comes more than 29 years after he collected his first win on April 9, 1993, in San Francisco’s 2-1 victory over St. Louis.

Before Tuesday’s game, while still sitting at 1,999 wins, Baker was asked what it would mean to him to reach 2,000.

But the 72-year-old Baker did acknowledge that being the first Black manager to reach 2,000 wins makes the achievement more meaningful.

It’s the latest milestone in a storied career as a player and manager that has spanned more than 50 years.

RELATED: Astros Altuve apologizes for getting injured on Monday against Angels

Here are some of Baker’s previous milestone wins as a manager:

Baker has reached the World Series twice as a manager, last season with the Astros and in 2002 with the Giants. As a player, he went three times with the Dodgers, winning it all as a big-hitting left fielder in 1981.

Ten of the 11 other managers who have accumulated at least 2,000 wins are in the Hall of Fame. Bruce Bochy (2,003), who isn’t yet eligible, is the only exception.

Baker’s career record is 2,000-1,745 and he’s the only manager in major league history to take five different teams to the postseason. 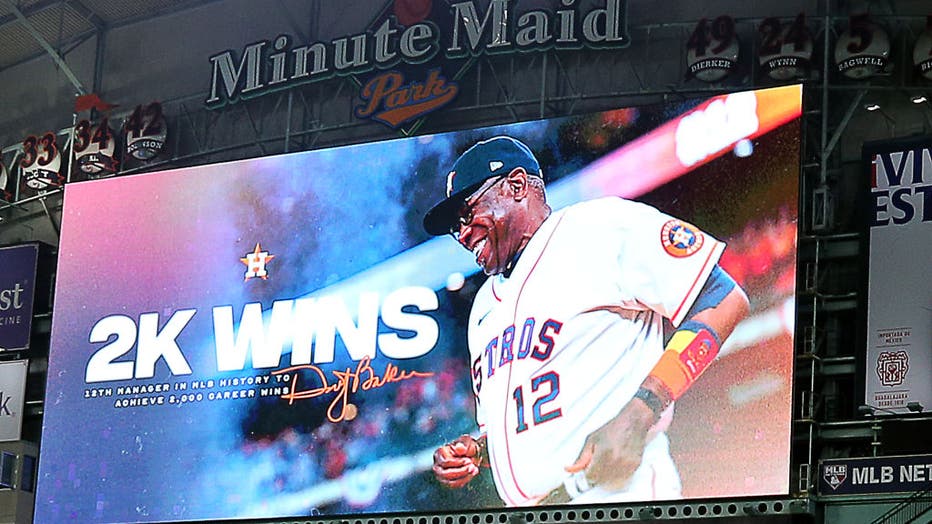 Manager Dusty Baker Jr. #12 of the Houston Astros is honored for his 2000th career win after a game against Seattle Mariners at Minute Maid Park on May 03, 2022 in Houston, Texas. (Photo by Bob Levey/Getty Images)

"It’s an honor to play for somebody who loves the game and loves his team and is so knowledgeable about the game of baseball and who has had such a storied career," Houston third baseman Alex Bregman said. "To be able to learn from him, play for him and just to be able to suit up with him every single day is very special and nobody in here takes that for granted."

There was a time Baker wondered if he’d even get a chance to chase this milestone. After being fired by the Nationals following a 97-win season in 2017, Baker didn’t get another job until 2020 after Houston’s sign-stealing scandal cost manager A.J. Hinch his job.

"If there wasn’t a scandal, I wouldn’t be in this position," Baker said. "My phone wasn’t ringing off the hook. Three different times I lost jobs and twice I was winning, and I didn’t get a call for two years... so, yeah, it’s just a matter of perseverance. And I’m here and I’m... where I’m supposed to be."

Baker, who needs 41 more wins to move all the way up to No. 9 on the career list, was asked about cracking the top 10.