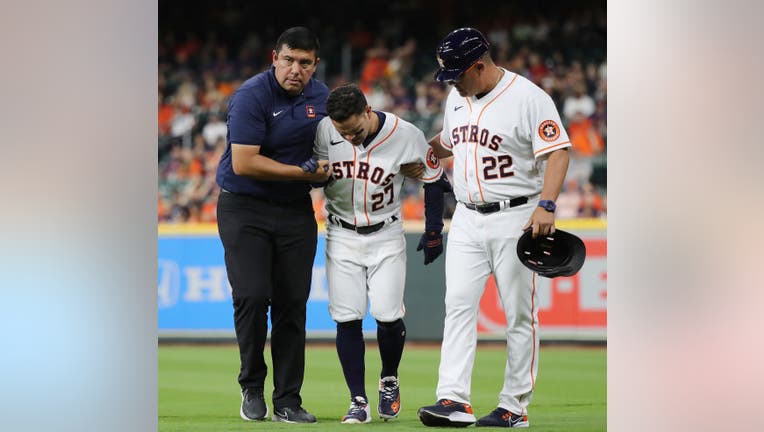 HOUSTON, TEXAS - APRIL 18: Jose Altuve #27 of the Houston Astros is helped off the field by first base coach Omar Lopez #22 and a trainer after injuring himself running out an infield hit in the eighth inning against the Los Angeles Angels at Minute

Altuve left Monday night’s 8-3 win over the Los Angeles Angels in the eighth inning with a strained left hamstring.

Altuve legged out an infield single with one out in the eighth and then fell to the ground past first base. He sat on the ground and threw his batting helmet into the ground as he winced in pain.

Houston Astros Manager Dusty Baker gives an update after second baseman Jose Altuve was injured in a game against the Los Angeles Angels at Minute Maid Park on Monday night.

"We didn’t think he’d be ready to go in a week," Astros manager Dusty Baker said. "It’s a 10-day IL & then we’ll reevaluate from there. He was disappointed, and he apologized, which you don’t have to, but that’s the kind of guy he is. Sometimes you can’t help it. This guy’s been a rock."

Baker says Jose Altuve apologized for getting injured, which Dusty says Jose certainly didn’t have to and Dusty says he doesn’t see that very often with players: "Couple of them, not many. This guy’s a quality guy. Like I told him, you don’t have to apologize for anything."