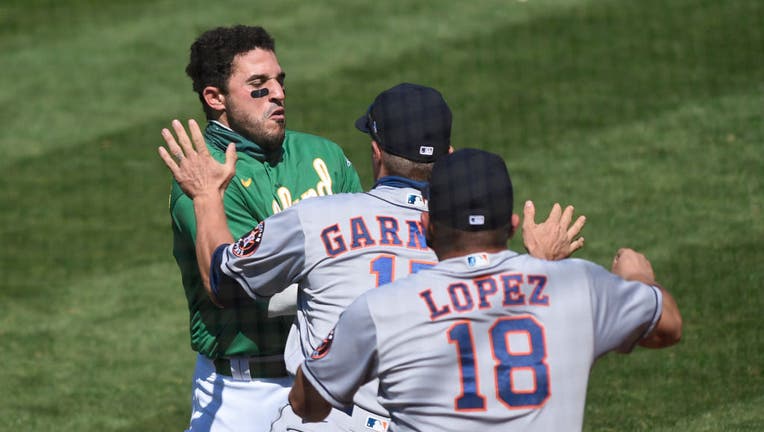 OAKLAND, Calif. - Benches cleared and even the stands emptied during Oakland's 7-2 victory over the Astros on Sunday, tempers flaring at last between the AL West rivals months after Houston's sign-stealing scandal was brought to light by Oakland pitcher Mike Fiers.

The Athletics' ninth straight win was far overshadowed by what erupted in the seventh inning at the Coliseum.

Oakland's Ramon Laureano got hit by a pitch -- for the third time in the three-game series -- this one by Humberto Castellanos with one out in the seventh. Laureano began exchanging words with animated Astros hitting coach Alex Cintron, then left first base, threw down his batting helmet and began sprinting toward him. 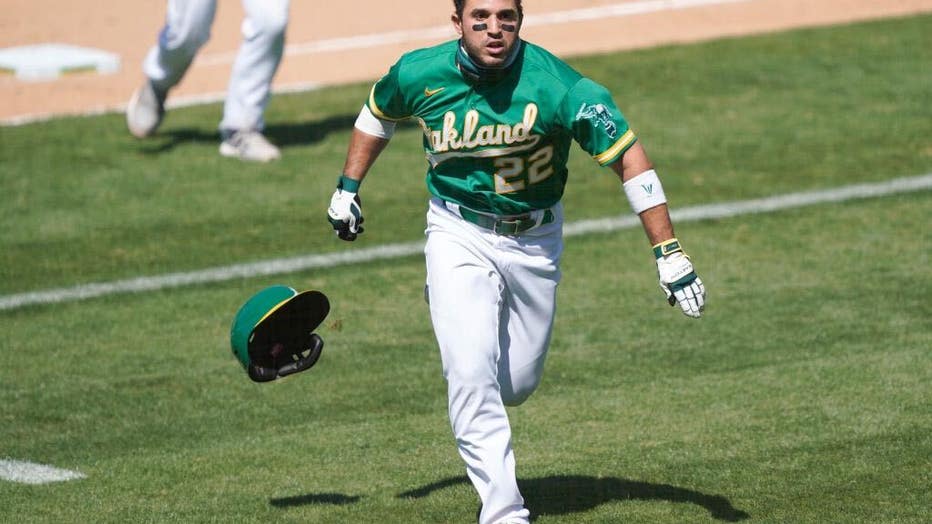 OAKLAND, CALIFORNIA - AUGUST 09: Ramon Laureano #22 of the Oakland Athletics charges towards the Houston Astros dugout after he was hit by a pitch in the bottom of the seventh inning at RingCentral Coliseum on August 09, 2020 in Oakland, California. 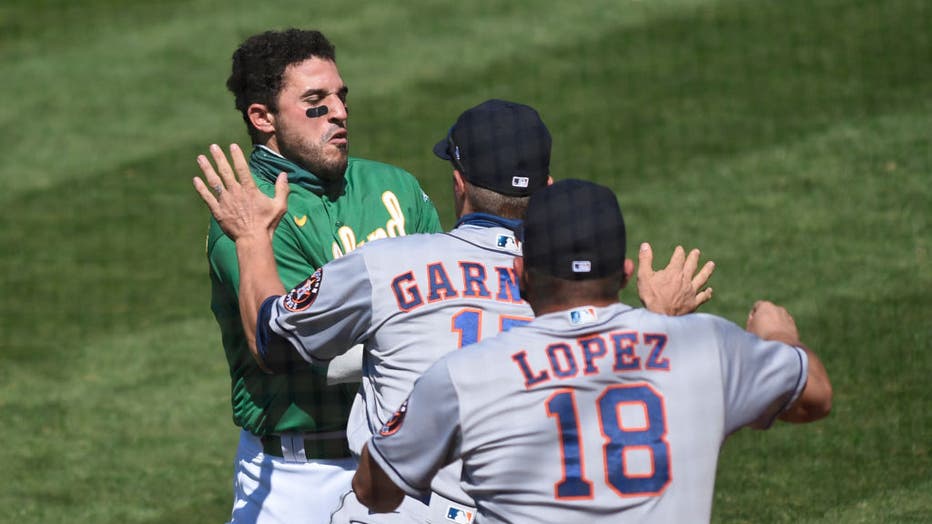 Players rushed out of both dugouts to join the fray. A's and Astros players who were sitting in the seats, observing COVID-19 social-distancing protocols, also rushed onto the field.

Laureano was ejected by plate ump Ted Barrett, and the umpiring crew could easily be heard yelling at the players to "get back to the dugout!" through a ballpark with no fans.

Oakland batters were hit five times during the series, no Houston hitters were plunked.

Ex-Astros player Fiers didn't pitch this series. He went public to The Athletic in November about Houston's detailed sign-stealing scam. The Astros have won the past three division crowns, a World Series in 2017 and AL pennant last year. The A's won 97 each in 2018 and '19 only to lose the AL wild-card game.

Matt Olson hit a three-run homer in the third and Matt Chapman connected the very next pitch, taking the score from 1-0 to 5-0 on consecutive offerings from Astros starter Cristian Javier (1-1).
Robbie Grossman also homered and Mark Canha contributed an RBI single.

TRAINER'S ROOM
Astros: CF George Springer resumed hitting work in the batting cage but was still listed as day to day by Baker. The outfielder missed his third straight game after suffering a sprained right wrist diving for a ball during Thursday's loss at Arizona.

Athletics: RHP Jordan Weems, on the injured list with a lat strain, will throw to hitters soon at the club's San Jose alternate site. "I know everything's progressing well," manager Bob Melvin said. ... LHP A.J. Puk (strained throwing shoulder) is playing catch out to about 90 feet but Melvin said, "It's going to be a while before he gets on a mound."