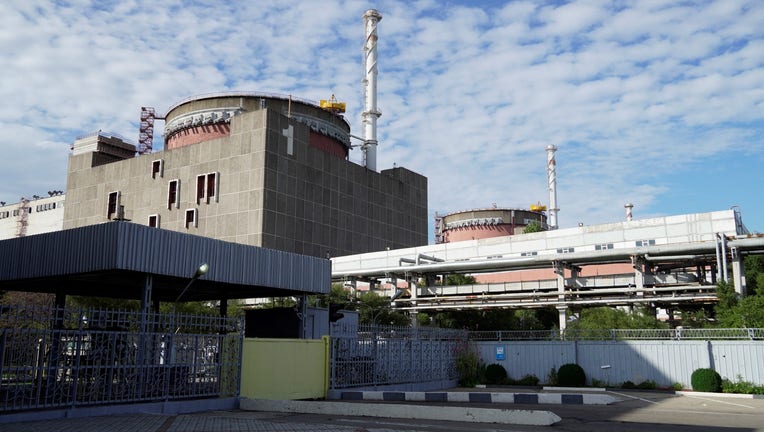 This photo taken on September 11, 2022 shows a general view of the Zaporizhzhia Nuclear Power Plant in Enerhodar (Energodar), Zaporizhzhia Oblast, amid the ongoing Russian military action in Ukraine. (Photo by STRINGER/AFP via Getty Images)

The nuclear scare came amid a flurry of developments in Russia’s 7 1/2-month invasion of Ukraine. Russia’s main domestic security agency said eight people were arrested over an explosion on a bridge that links Russia to the Crimean Peninsula.

The Ukrainian president’s office said strikes Moscow ordered in retaliation for the bridge attack killed at least 14 people and wounded 34 in the last day. Western officials meeting in Brussels discussed their plans to maintain winter weapon and aid deliveries to Ukraine.

The bridge is a key supply artery for Moscow’s faltering war effort in southern Ukraine.

All six of the reactors were stopped earlier due to the war. But they still require electricity to prevent them from overheating to the point of a meltdown that could cause radiation to pour from Europe's largest nuclear plant. Energoatom said diesel generators were supplying the plant but Russian troops blocked a convoy carrying additional fuel for the back-up equipment.

"Basically what we’ve got here is the weaponization of civil nuclear, perhaps for the first time," Paul Dorfman, a nuclear expert at England's University of Sussex said. "And in an increasingly unstable world, it’s important to understand this and what this implies for nuclear worldwide."

Ukrainian workers later found a way to repair the line and connected the plant to the Ukrainian power grid, the company said. The chief of Energoatom, Petro Kotin, told The Associated Press last month the plant typically had enough diesel on hand to run the generators - "the station’s last defense before a radiation accident" for 10 days.

Western governments, in the wake of the punishing missile and drone strikes Russia carried out across Ukraine this week, were shipping new weapons systems to Ukraine or gearing up to provide more help: The U.S.-led Ukraine Defense Contact Group and NATO defense ministers held meetings in Brussels on Wednesday.

Russia's Federal Security Service, known by the Russian acronym FSB, said it arrested five Russians and three citizens of Ukraine and Armenia in the attack on the Kerch Bridge. A truck loaded with explosives blew up while driving across the bridge Saturday, killing four people and causing sections of road to collapse.

The span opened four years after Russia annexed Crimea from Ukraine in 2014, serving as a symbol of Moscow's regional dominance as well as a crucial route for getting military supplies to Ukraine and Russian travelers to a popular vacation destination.

The FSB alleged the detained suspects acted on orders of Ukraine’s military intelligence to secretly move the explosives by a convoluted route into Russia and forge accompanying documents.

"The entire activity of the FSB and the Investigative Committee is nonsense," Defense Ministry spokesman Andriy Yusov told reporters.

Russian President Vladimir Putin responded to the blast by ordering missile strikes across Ukraine, where his forces over the last month lost ground in the east and south as Ukraine's military waged a counteroffensive. Ukrainian authorities said Russian missiles killed 19 people on Monday, including five in Kyiv, the capital. 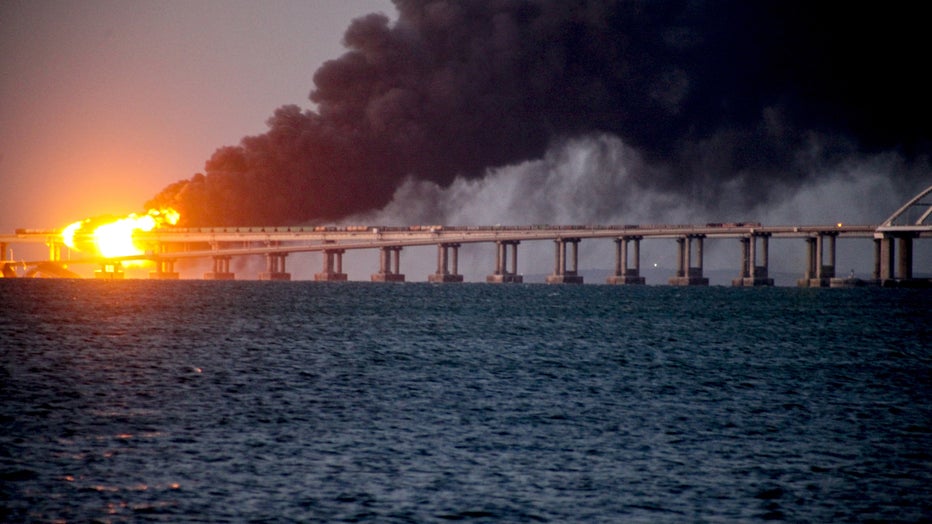 Explosion causes fire at the Kerch bridge in the Kerch Strait, Crimea on October 08, 2022. (Photo by Vera Katkova/Anadolu Agency via Getty Images)

Ukraine’s presidential office said in a morning update that eight Ukrainian regions in southeast were affected by Russian shelling and attacks involving drones, heavy artillery and missiles in the previous 24 hours, while strikes on central and western parts of Ukraine had ceased.

Kyrylo Tymoshenko, the deputy head of President Volodymyr Zelenskyy's office, said Russian shelling left at least 14 people dead in the Zaporizhzhia region and the Donetsk region to the east. At least 34 people were wounded in five regions, he wrote on Telegram.

More than a dozen missiles were fired at the city of Zaporizhzhia and its suburbs, damaging residential buildings. While part of a larger eponymous region that Moscow has claimed as its own in violation of international law, the city remains in Ukrainian hands. Russian forces control the area about 53 kilometers (33 miles) away by air where the nuclear plant is located.

In Nikopol, a city across the Dnieper River, three people were wounded, including a 6-year-old girl; medical workers say they were in grave condition. Over 30 multi-story residential buildings were damaged in the city of 104,000, as well as private houses, kindergartens, a school, two plants and several shops, authorities said.

In the Donetsk region, Russian forces used tanks to shell the city of Avdiivka, damaging residential buildings and a market. Seven people were killed and eight wounded, Tymoshenko posted on Telegram along with photos showing bodies on the ground by a kiosk with potatoes and bread on the counter.

"Russian shelling intensifies and subsides, but doesn’t stop, not for a day -- the city lives in tension, and the Russians’ main goal appears to be keeping us in fear," Mykolaiv regional governor Vitali Kim said.

Earlier Wednesday, Ukraine’s southern command said its forces recaptured five settlements in the southern Kherson region, on the western fringe of an arc of Russian-controlled territory in eastern and southern Ukraine. 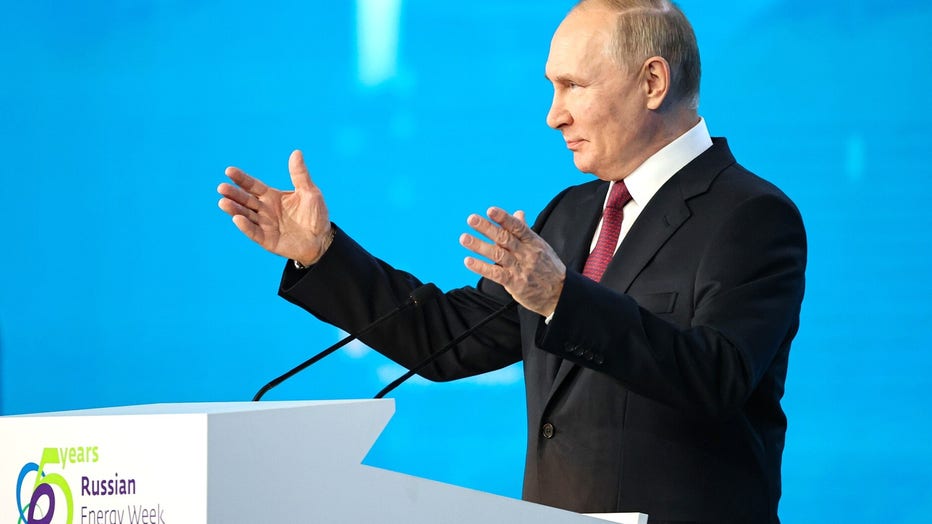 Kherson, Donetsk, Zaporizhzhia and Luhansk are four regions recently annexed by Russia, a move condemned as illegal under international law by many countries and the U.N. secretary-general.

Despite the advance, Ukrainian military analyst Oleh Zhdanov said Ukrainian forces’ counteroffensive in the south was losing pace, while regrouping in the east to deliver a "powerful blow" on the front line between the cities of Svatove and Kreminna in Luhansk region.