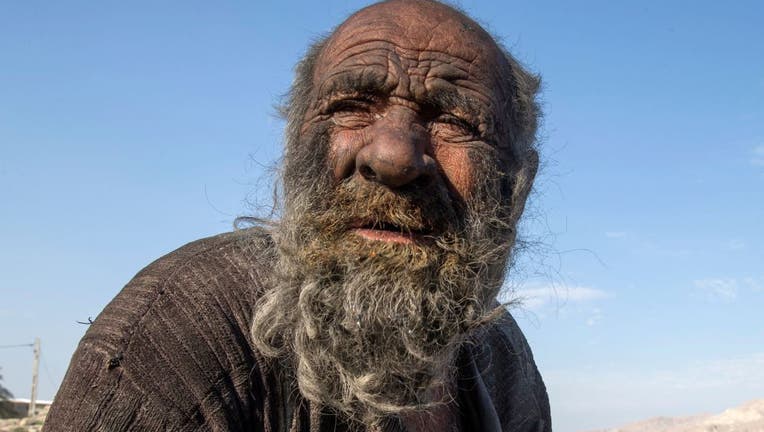 Amou Haji (uncle Haji) is pictured on the outskirts of the village of Dezhgah in the Dehram district of the southwestern Iranian Fars province, on December 28, 2018. - Believed to be the worlds dirtiest man, villagers say that Haji's leather-like ski

An Iranian man dubbed the "world’s dirtiest man" has died at the age of 94, according to state media.

Amou Haji died Sunday in the village of Dezhgah, according to the Islamic Republic News Agency (IRNA). He had refused to bathe for more than 60 years, fearing it would make him sick.

He gained notoriety around the globe for his unofficial title as "world’s dirtiest man," and his life was even chronicled in a 2013 documentary called "The Strange Life of Amou Haji."

Villagers had recently pressured him to bathe, and "for the first time a few months ago, villagers had taken him to a bathroom to wash," the IRNA report stated, according to The Telegraph.

"Not long after, he fell ill and finally, on Sunday … he gave up his life," the report continued, according to The Telegraph.

Amou Haji reportedly had no wife or family, but some villagers tried to look after him, including reportedly building him a cinder-block dwelling.

"Emotional setbacks in his youth" reportedly kept him from bathing, according to villagers cited by The Guardian.

He also allegedly ate roadkill and had been photographed smoking multiple cigarettes at once.

A man living in India named Kailash "Kalau" Singh could now be the "world's dirtiest man," The Guardian speculated, citing a Hindustan Times article from 2009 reporting that he had not bathed since 2009.

GET UPDATES ON THIS STORY AT FOXNEWS.COM