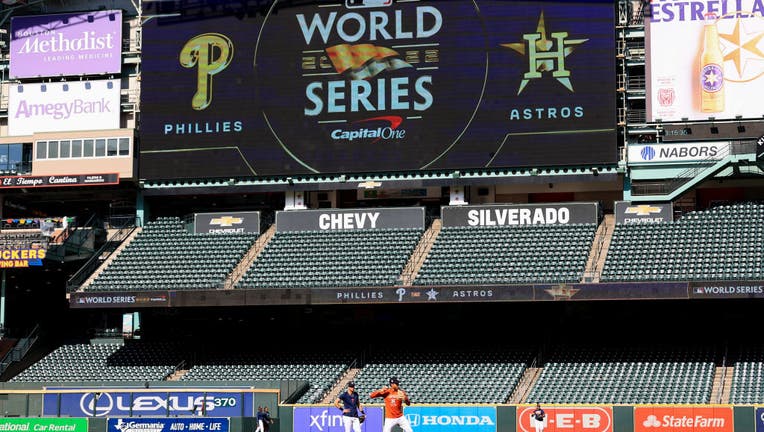 HOUSTON - With the World Series only a day away, the decision for whether the ballpark roof will be open or closed has already been decided.

Major League Baseball has decided to close the roof of Minute Maid Park for Game 1 of the World Series and will likely keep it closed for Game 2.

The weather forecast for Friday calls for a 90% chance of rain in the Houston area.

Today will be pleasant and quiet, with the possibility of some scattered lighter showers and storms beginning overnight. The bulk of the heavier rain and the possibility for stronger storms arrives by mid-morning Friday through much of Friday afternoon. Give yourself some extra time to navigate any issues that might pop up getting around town, rain will gradually dwindle throughout the evening, and Saturday we hang onto some clouds but north breezes will usher in cooler, drier air by Game 2. Sunday looks great for outdoor plans and trick-o-treating, winds will be lighter. Halloween Monday looks great locally too. We'll be keeping our eye on Philly's forecast, as our front heads there next, and could cause some issues for Monday's game.

The Houston Astros swept the ALCS against the Yankees to punch their ticket to the World Series. It will be their 4th appearance in the last 6 seasons, and they remain undefeated in the playoffs.

Justin Verlander will be the starting pitcher for the Astros while Aaron Nola will start for the Philadelphia Phillies.

The first pitch will be thrown at 7:03 p.m. People have eagerly been purchasing tickets to the game as Stubhub reported overall sales for the World Series have increased more than 145% since Monday.

EDITORS NOTE: This video is from a previous story. FOX 26 Reporter Matthew Seedorff spoke with the man who gained TikTok popularity after his impromptu TikTok post about the Astros win.

However, since the Phillies haven't won a World Series since 2008 and haven't played in one since 2009, tickets are more expensive in Philadelphia with prices starting at $788.

If you're unable to watch a game of the best-of-seven series at the park, you can cheer on the team from watch parties across the city.

While the Astros are playing in Philadelphia, Minute Maid Park will host watch parties here at home. You can watch the game on the big screen and enjoy festivities around the ballpark during Games 3, 4, and 5 (if necessary) from Oct. 31 to Nov. 2. You will need to claim a $1 voucher (click here) to attend. Proceeds benefit the Astros Foundation.