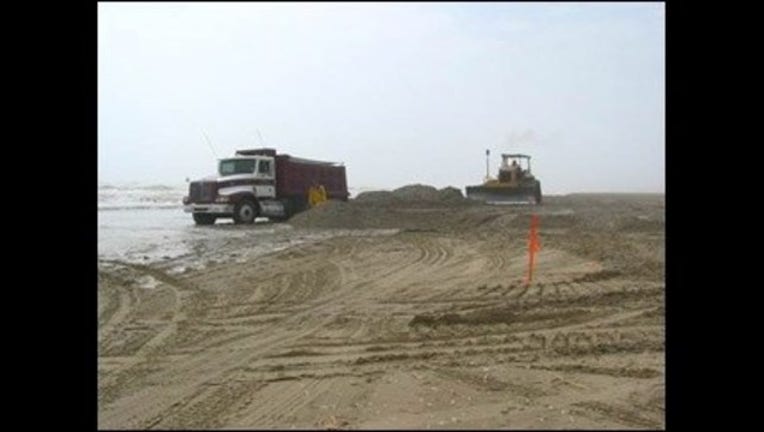 Where do you put 725,000 cubic yards of sand? Galveston's going to dump it all along the seawall between 61st and 81st streets.

"This is a game-changer," said Mary Beth Bassett, a spokeswoman for the Galveston Park Board of Trustees. "There's going to be beach where there hasn't been any beach for years. It will be protection from storm surges."

Hurricane Ike battered Galveston in September 2008 and recovery continues on the island city.

The $23 million beach expansion project, which will bringing 20 more blocks of squish-between-your-toes sand to Galveston, got underway Friday,
The project will use about 725,000 cubic yards of sand dredged from the Galveston Ship Channel, transforming the current rocky shore along the Gulf of Mexico into an area both more inviting to visitors and better protected from storms.

The extended sandy beach is not only great for Houstonian visits and  tourist toes, it's also meant to protect against tides and other rough weather. Sand should be pumped into the area starting Aug. 22 in a process that will continue through the end of October, Bassett said.

The property is owned by Texas but managed by the park board, she said. The project also involves the city and the U.S. Army Corps of Engineers, which dredges the Galveston Ship Channel every 18 to 24 months.
Sand typically dumped offshore will be placed instead on the extended beach, according to a park board statement