The first shipment of baby formula has arrived in the U.S. from Europe to help alleviate the national shortage. Here's a look at where it is going.

Houston - Seventy-thousand pounds of baby formula have arrived in the U.S. from Europe to help alleviate the national shortage.

The first shipment originated from Switzerland and arrived Sunday in Indianapolis on a U.S. military aircraft, but it is headed for hospitals, doctors, and pharmacies, not store shelves.

It is a shipment of hypoallergenic formulas, Nestle's Alfamino Infant and Alfamino Junior.  It's enough to feed 9,000 babies and 18,000 toddlers for a week who are allergic to cow's milk.

Then 114 pallets of Gerber Good Start Extensive HA formula, which is also hypoallergenic, will arrive in Washington Dulles later this week. 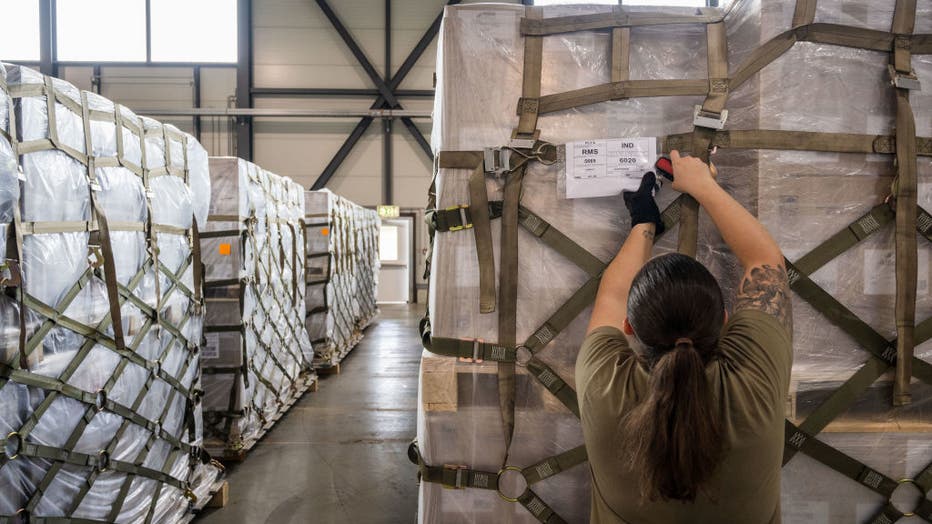 U.S. airmen load pallets with baby formula which arrived by three trucks from Switzerland for the United States at Ramstein American Air Force base on May 21, 2022 in Ramstein-Miesenbach, Germany. (Photo by Thomas Lohnes/Getty Images)

The White House says the two shipments are enough to fill 1.5 million bottles.

This is part of President Biden's Operation Fly Formula to rapidly restock formula, which is currently about 45% short across the country.

"It's fantastic that we're getting so many pallets and formula here on the ground and Abbott's reopening, but it's still going to take all of us working together. Those aren't just going to get restocked tomorrow," said Heather Figueroa, a mom in North Texas.

"I'm a mom, and I'm my children's advocate, just like all of us are. And where there's a will, there's a way, and we're going to find it," Figueroa said.

Congress is holding hearings on the crisis later this week.

Abbott Nutrition's plant reopens next week, but it could take two months for those products to hit store shelves.

• Here are some suggestions to find formula in the meantime:

• Ask your pediatrician or OBGYN.

• Families who qualify can also reach out to WIC and LIFE Houston.