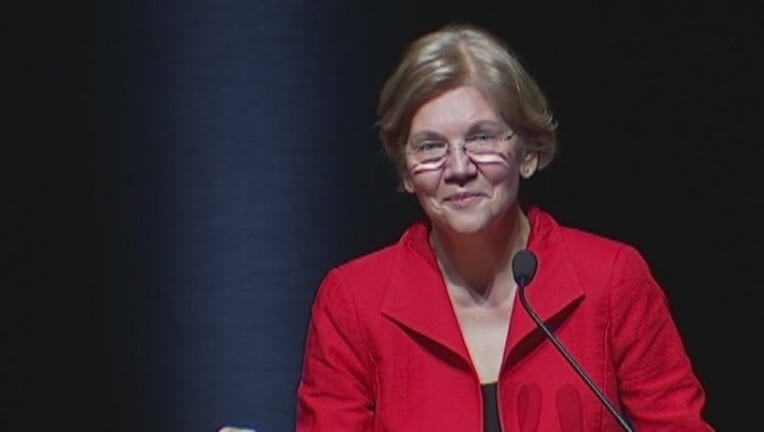 SAN FRANCISCO (AP) - Sen. Elizabeth Warren electrified California Democrats on Saturday with a pledge for bold action, matching if not outshining enthusiasm for the state's own Sen. Kamala Harris to kick off a day when more than a dozen presidential candidates planned to make their cases to thousands of activists in the nation's largest liberal stronghold.

"Some say if we all just calm down, the Republicans will come to their senses," Warren said in bringing the crowd to its feet with a thinly veiled shot at former Vice President Joe Biden, who has expressed hope the GOP will have "an epiphany" after President Donald Trump is gone. "But our country is in a crisis. The time for small ideas is over."

Biden was the only major candidate not attending the three-day gathering in San Francisco, opting instead to campaign in Ohio.

California has shifted its 2020 primary earlier on the calendar, to March 3, part of the Super Tuesday collection of contests, in hopes of giving the state more sway in choosing the party's nominee. California will offer the largest delegate haul, but it is a notoriously difficult state to campaign in, given its massive size and expensive media markets.

While Harris has a built-in advantage, Vermont Sen. Bernie Sanders is also expecting to build heavily on the organization he built in the 2016 contest. She looked to make a show of force in Saturday's prime speaking slot to kick off addresses from presidential hopefuls, the day's main event. She played up her deep connection to California voters, having won statewide office three times, once to U.S. Senate and twice as the state's attorney general, and having been elected as San Francisco's district attorney.

Harris too sparked a standing ovation when she declared, "We need to begin impeachment proceedings and we need a new commander in chief!"

Former Texas Rep. Beto O'Rourke also addressed the morning convention, slipping seamlessly between Spanish and English, a key move in a state with a large Hispanic population. He praised California Democrats for their massive turnout in the 2018 midterms, when the party flipped seven U.S. House seats held for years by Republicans and noted that his unsuccessful Senate bid drew record Democratic turnout as well.

"You, California Democrats, have offered the rest of the country an example," he said. "And in Texas we were right there with you."

Sanders wasn't scheduled to address the full crowd until Sunday, but he greeted union workers at a Saturday morning breakfast and received an enthusiastic reception Friday night at a meeting of the Chicano-Latino caucus, which endorsed him during the close 2016 contest with Hillary Rodham Clinton.

"This time we are going to win California," he declared.