The family of a 9-year-old girl killed after being shot by a robbery victim trying to get the person who robbed him is demanding justice. This after the shooting suspect was granted a $100,000 bond.

HOUSTON - Family members are still reeling from the death of a 9-year-old shot and killed by a robbery victim on Tuesday near a Chase bank in southeast Houston.

A vigil was held Wednesday for Arlene Alvarez in the 2900 block of Woodridge Drive, where she was killed, and the public was invited to attend. 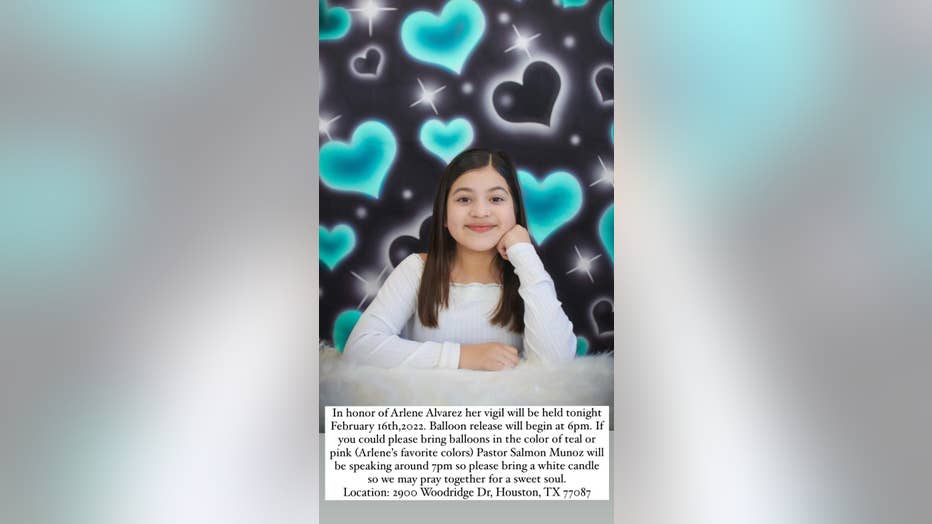 Authorities say Arlene was killed after Tony Earls, 41, and his wife were at the Chase Bank ATM on Woodridge Drive when another man robbed them. Investigators said Earls then shot at the man that ran away, then at Armando Alvarez’s truck, thinking the innocent family driving by was involved in the robbery.

The city of Houston has lost another innocent child to senseless gun violence. A 9 year-old-girl was accidentally shot by a robbery victim in southeast Houston in a Chase Bank parking lot Monday night and Houston Police say the man had just been victimized and thought he was firing at the suspect who robbed him. Instead, he fired into a truck carrying a family. Crime continues to rise in Houston, and with Texas gun laws changing that now allow people to carry a weapon without obtaining a canceled handgun license, Houston Mayor Sylvester Turner has warned residents that they should assume everyone is carrying a weapon. So what happens when you're trying to defend yourself and that goes terribly wrong? The News Edge spoke to legal analyst Charles Adams about what the law says about firing in self-defense but missing your target.

Sadly, Mr. Alvarez's daughter, Arlene was hit by the bullet and rushed to a hospital, where she was declared brain-dead for several hours before the family made their decision.

FOX 26 spoke with Earls and his wife off-camera on Tuesday. According to the couple, they were held at gunpoint for roughly four minutes at the ATM. Earls' wife claims her husband had been trying to protect them when he fired his gun. The couple says the thief, wearing a mask, stole a paper check, wallet, and $20. The Earls claim the robber then shot at them, so he fired back.

Over the phone, Earls wanted to apologize to the Alvarez family. He said he feels bad and that Arlene didn’t deserve it. Earls and his wife say they’re praying for Arlene’s parents, siblings, family, and friends.

Officials with Houston ISD confirmed Arlene was a student at De Zavala Elementary School and issued the following statement:

We offer our deepest sympathy to the student’s family, friends, and the entire school community. Counselors have been made available to support students and staff at this difficult time.

Police are still searching for the robbery suspect and anyone with information in the shooting or the robbery is urged to contact the HPD Homicide Division at 713-308-3600 or Crime Stoppers.