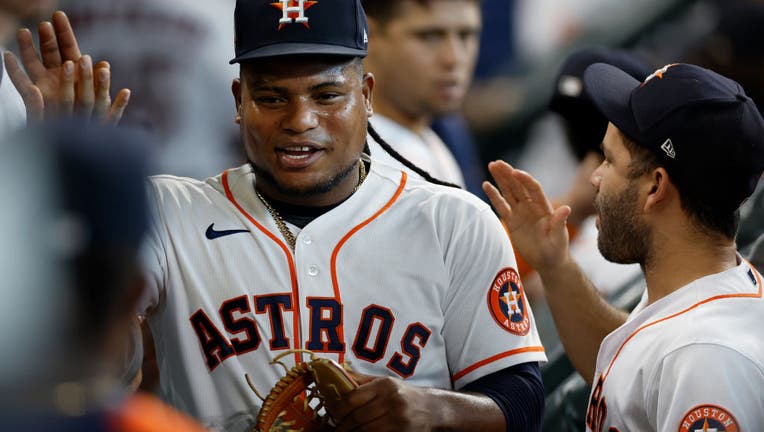 HOUSTON, TEXAS - OCTOBER 05: Framber Valdez #59 of the Houston Astros is greeted by teammates in the dugout after the fifth inning of the game against the Philadelphia Phillies at Minute Maid Park on October 05, 2022 in Houston, Texas. (Photo by Tim

HOUSTON (AP) — Framber Valdez struck out 10 in five shutout innings to lead the Houston Astros to 3-2 win over the Philadelphia Phillies in the regular-season finale Wednesday.

Christian Vazquez hit a solo homer and Chas McCormick and Yordan Alvarez drove in runs early to help Houston to its fourth victory in five games.

It was the career-best 17th win for Valdez (17-6), which ranks second in the American League behind teammate Justin Verlander’s 18.

Valdez allowed just two singles and walked one as he surpassed 200 innings pitched for the first time in his five-year career.

Mauricio Dubon doubled to start Houston’s third before scoring on a one-out double by McCormick to make it 1-0. There were two outs in the inning when Alvarez lined a single to left field to send McCormick home and leave Houston up 2-0.

Vazquez homered with two outs in the seventh to extend the lead to 3-0.

Brandon Marsh hit and RBI double with one out in the seventh and the Phillies cut the lead to one on a sacrifice fly by Rhys Hoskins. However, Rafael Montero retired Darick Hall to end the inning.

Closer Ryan Pressly pitched a scoreless ninth for his 33rd save.

The Astros, who won the AL West and clinched home-field advantage through the World Series, finished 106-56 for the second-best record in franchise history after going 95-67 last season and falling to the Braves in six games in the World Series. They came one win shy of the most wins in team history, earned by the 2019 team.

The NL wild card Phillies end the season 87-75 — a five-win improvement from last year — and are in the playoffs for the first time in 11 years.

Valdez wrapped up a strong season with his solid start Wednesday. He had 25 straight quality starts from April 25-Sept. 18 to set the MLB record for most consecutive in a single season. His 31 starts were a career-high and his 2.82 ERA ranks second-lowest of his career and sixth in the AL.

The consistency of Valdez paired with ace Verlander gives the Astros a potent 1-2 punch at the front end of their rotation as they enter the playoffs.

Houston’s Ryne Stanek pitched a perfect seventh to lower his ERA to 1.16 to finish the season with the lowest by a reliever in franchise history. He eclipses Will Harris, who had a 1.50 ERA in 2019.

Phillies starter Bailey Falter yielded two hits in one inning before he was lifted for Michael Plassmeyer (0-1). He allowed three runs and nine hits with six strikeouts in six innings.

Houston reliever Phil Maton faced his younger brother Nick Maton for the first time in the eighth inning. The brothers smiled at one another as Nick entered the box before getting down to business.

Both teams were very engaged in the family showdown with most the players hanging on the railing in the dugouts to watch.

The little brother won matchup, hitting a single to right field on a 2-2 count. Phil shook his head after seeing the ball sail by and Nick smiled sheepishly as he reached first base.

Players in Philadelphia’s dugout raised their arms and cheered as Nick made contact and some Astros hung their heads after seeing the hit drop in the outfield.

The lights in Minute Maid Park went out briefly in the second inning. Players and the umpires looked around darkened stadium wondering what was going on for a minute or so before they flickered back on, and play resumed.

Phillies: Open their wild-card series at St. Louis Friday in their first playoff game since Oct. 7, 2011.

Astros: Will face the winner of the Toronto-Seattle wild-card series starting Tuesday in Houston.