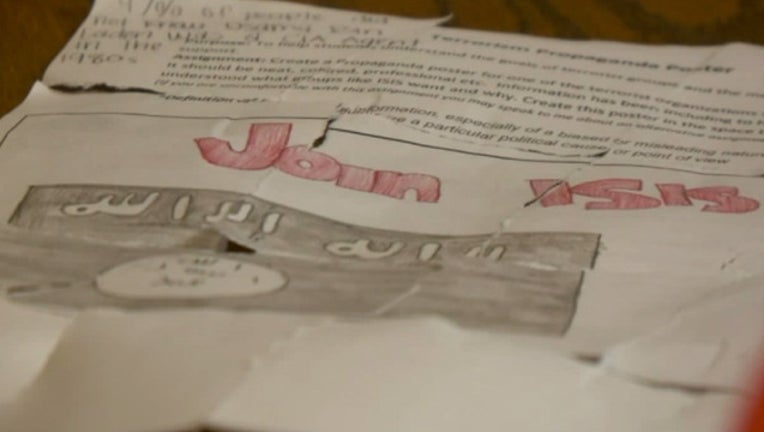 SALT LAKE CITY (AP) — A Utah school apologized Thursday for a classroom assignment in which students were asked to create a propaganda poster for a group such as Islamic State to understand the goals and methods of terror groups.

Hiskey said the assignment was given Wednesday by a first-year teacher to about 60 ninth-grade students in a world civics class. It was not approved by the school and was not a part of any official curriculum.

"She wanted the students to understand how propaganda can be wrong and lead people incorrectly," Hiskey said of the teacher.

School officials were first alerted to the assignment when parents complained.

No disciplinary action was planned against the teacher, who is apologetic and has met with school administrators, said Hiskey, who declined to provide the educator's name.

The assignment came as students were discussing the Middle East, terrorism and propaganda, including the use of propaganda during World War II, Hiskey said.

An image of the assignment worksheet shared with the station by a parent said students should mock up a "neat, colored, professional" poster.

The worksheet said the purpose of the poster was "to help students understand the goals of terrorist groups and the methods they use to gain support."

A worksheet said the poster could help students understand the goals of terrorist groups and the methods they use to gain support.

It also included a disclaimer saying any student uncomfortable with the assignment could ask for an alternative. Hiskey did not know if any students made that request.

The school is located in Salem, Utah, about 60 miles south of Salt Lake City.

Another student poster project drew complaints of Utah parents two years ago, when the state oil, gas and mining division held a contest where elementary school students were asked to create posters for Earth Day in the theme "Where would we be without oil, gas and mining?"

Parents said it was propaganda on the part of the mining industry and missed the point of Earth Day.