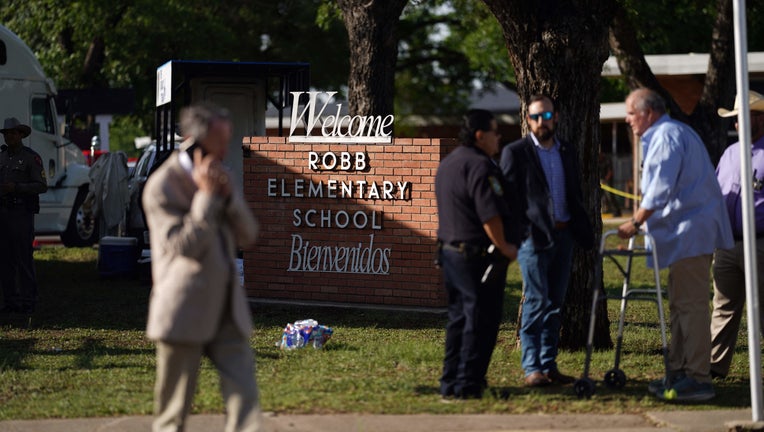 Uvalde, Texas, Mayor Don McLaughlin (R) speaks with an officer outside Robb Elementary School in Uvalde, Texas, on May 25, 2022. (Photo by ALLISON DINNER/AFP via Getty Images)

In the aftermath of the 2018 Tree of Life synagogue shooting that left 11 people dead in Pittsburgh, then Mayor Bill Peduto was asked what he wished he had when crafting the city’s response.

"He said he could have used a checklist, a protocol, to help him understand his role," explained Sarah Peck, director of UnitedonGuns, a nonpartisan initiative of the Public Health Advocacy Institute at the Northeastern University School of Law.

With that in mind, Peck and her team got to work. In the U.S., where 45,222 people died from gun-related injuries in 2020 and there are more guns than citizens, it wasn’t hard to find a half-dozen mayors, police chiefs and city managers who’d been through a mass shooting in their town.

And with the massacres in Uvalde, Texas, and Buffalo, New York, fresh on the minds of city leaders everywhere, Peck said the time for mayors to prepare is now.

'I am livid': Texas Gov. says he was misled about officers response to Uvalde school shooting

Gov. Greg Abbott held a press conference to highlight state and federal response to support victims of the Uvalde, Texas school shooting. During the event, Abbott also said he was misled about the police response during the shooting response.

"Mayors rarely think about how they’d respond to a mass shooting until it happens, and they don’t appreciate the magnitude of their role," Peck said in an interview with FOX Television Stations. "This isn’t something you can learn by participating in an active shooter drill. This isn’t law enforcement response."

United on Guns, which promotes public health approaches to reducing gun violence "while respecting gun ownership," did extensive research on six cities that suffered mass shootings. Based on the data, they came up with two vital resources that mayors hope they’ll never need: a four-page overview of what to do in the first 24 hours and a 200-page playbook breaking down 10 key areas of response.

"This is your responsibility as communicator in chief," Peck continued. "What is your role at press conferences? How do you prevent the wrong people from speaking? How do you offer a sense of hope to your community? I think mayors don’t understand how huge the need for services will be."

In the event of a mass shooting, a network of mayors reaches out to other mayors to give them the playbook and protocols. But with the mayhem that follows a mass tragedy, Peck fears not enough mayors are getting the resources as the events unfold. 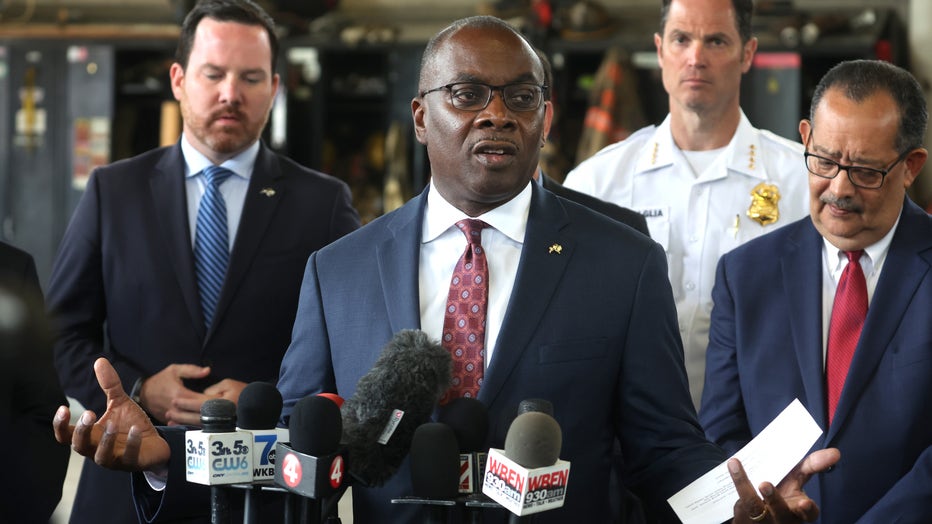 BUFFALO, NEW YORK - MAY 16: Mayor Byron Brown speaks to the press at a fire station near the location of the Tops market shooting on May 16, 2022 in Buffalo, New York. (Photo by Scott Olson/Getty Images)

"That’s the problem, after one of these shootings happen, everyone on Earth is contacting those mayors, those police chiefs," she said. "We are trying to figure out what we can do to help mayors and city managers know that this is an important resource, and they need to be thinking about it in advance. Anybody can take a look."

Peck, a former U.S. diplomat who returned to Northeastern Law School to work with the Public Health Advocacy Institute, recalled what led to her work in reducing gun violence. She was at the U.S. State Department in December 2012 watching TV monitors when 26 people — including 20 children between 6 and 7 years old — were shot and killed at Sandy Hook Elementary School. At the time, her brother and his family lived in Newtown, Connecticut, where the unthinkable tragedy occurred.

During an impassioned speech on the Senate floor Tuesday, Murphy said hearts in his state where 26 school children and educators were killed a decade ago are breaking for the families in Texas.

"That Christmas, I spent the holiday with them, and I saw the trauma it caused in that community," she said. "Even 10 years later, I’m still affected by it."

Now, with the conversation focused largely on what the country can do to stop mass killings from happening again and again, Peck said there are things that people from both sides of the political spectrum could agree on — like "keeping guns out of the hands of dangerous people."

Lawmakers who oppose an outright ban could consider heightened background checks for assault weapons, along with required training, permits, and adequate storage of those weapons, she said.

On the state level, extreme risk protection orders, also known as red flag laws that allow family members to request guns be taken away from loved ones in crisis, are a solution "often supported in both red and blue states," Peck said.

"Research shows this can prevent suicides, and sometimes mass murders," she said.

"No one wants to see another tragedy like this one," she continued. "We really have to put politics aside and work together to find a way to keep guns out of the hands of people with hate-filled hearts."

RELATED: List: The most deadly US mass school shootings

Until that happens, Peck said, "from our perspective, mayors can do their part by being fully prepared to respond."

This story was reported from Seattle.