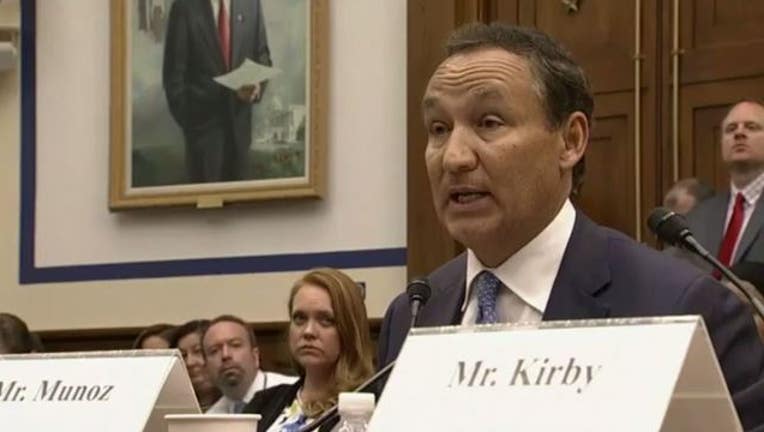 WASHINGTON (AP) -- United Airlines CEO Oscar Munoz apologized Tuesday on Capitol Hill for an incident in which a passenger was forcibly removed from a flight and vowed to do better as he and other airline executives faced tough questions from lawmakers.

"It was a mistake of epic proportions, clearly, in hindsight," Munoz told a congressional hearing. He said passenger David Dao was treated in a way that no customer - or individual - should be treated, calling it a "terrible experience" that should never be repeated.

United has taken a series of steps to reduce overbooking of flights since the April 9 incident and will raise to $10,000 the limit on payments to customers who give up seats on oversold flights, Munoz said. The airline also said it will improve employee training.

"This is a turning point for United, and our 87,000 professionals," a contrite Munoz said. "It is my mission to ensure we make the changes needed to provide our customers with the highest level of service and the deepest sense of respect."

The hearing by the House Transportation Committee comes amid worldwide outrage sparked when Dao was dragged off a United flight after refusing to give up his seat to a crew member. The incident ignited a debate about poor service and a lack of customer-friendly policies on U.S. airlines.

Transportation Committee Chairman Bill Shuster, R-Pa., said United and other carriers should use the notoriety of Dao's removal from the United flight to make changes that improve customer service.

If they don't make changes, Congress is likely to step in, Shuster said.

"Seize this opportunity," he told Munoz and other airline executives.

Otherwise, "we're going to act and you're not going to like it," he said, predicting a "one-size-fits-all" solution that may serve some airlines but not all.

United moved to head off criticism last week by reaching a settlement with Dao and issuing new policies designed to prevent customer-service failures. United and lawyers for Dao have declined to disclose financial terms of the settlement.

Dao's attorney has praised the airline and Munoz for accepting responsibility and not blaming others, including the city of Chicago, whose airport security officers yanked Dao from his seat and dragged him off the United Express plane.

Dao was waiting to fly to Louisville, Kentucky, on April 9 when the airline decided it needed four seats for Republic Airline crew members who needed to travel to work on another United Express flight in Louisville the next morning. When Dao and his wife were selected for bumping, he refused to leave.

Video of the incident has sparked more than two weeks of withering criticism and mockery of United. Munoz initially blamed Dao, but later said he was horrified by the event and called it a failure on United's part.

United has vowed to reduce - but not eliminate - overbooking, which occurs when more tickets are sold than there are seats on the plane.