AUSTIN, Texas (AP)  Austin-area officials have opened the city's convention center as a field hospital as COVID-19 cases continue to soar. The facility opened Tuesday with 25 beds. It can expand if needed. Gov. Greg Abbott said in a statement that the makeshift hospital will reduce the burden on local hospitals. Now Texas is working to rapidly ramp up vaccinations. Texas has seen a surge in newly confirmed coronavirus cases, hospitalizations, and deaths. State health officials reported Monday that more than 13,000 COVID-19 patients were hospitalized statewide. Nearly 30,000 people in Texas have died since the pandemic started.

DALLAS (AP)  A Dallas County man accused of beating two homeless men to death with a sledgehammer has been charged with two counts of murder. The Dallas Morning News reports that 58-year-old Adelaido Amaya Esparza was indicted in late December in the deaths of Fredrick Billmeier Jr. and Daniel Slusser. Billmeier was found bludgeoned to death at a bus stop in West Dallas on Oct. 20. Slusser was found unconscious and bleeding with serious head injuries at a strip mall in Oak Cliff on Nov. 20. Surveillance footage showing the attacks and the attacker's car led investigators to Esparza. The bloody sledgehammer and victims' DNA was found in his SUV.

WASHINGTON (AP) — President Donald Trump on Tuesday took no responsibility for his part in fomenting a violent insurrection at the U.S. Capitol last week, despite his comments encouraging supporters to march on the Capitol and praise for them while they were still carrying out the assault."People thought that what I said was totally appropriate," Trump said.

Trump made the comments during his first appearance in public as he boarded Air Force One, at Andrews Air Force Base, since the Capitol siege, which came as lawmakers were tallying Electoral College votes affirming President-elect Joe Biden’s victory. He was heading to Texas on Tuesday to trumpet his campaign against illegal immigration in an attempt to burnish his legacy with eight days remaining in his term, as lawmakers in Congress appear set to impeach him this week for the second time.

Trump says ‘tremendous anger’ in the nation over impeachment

Speaking Tuesday, Trump said the "real problem" was not his rhetoric, but the rhetoric that Democrats used to describe Black Lives Matter protests and violence in Seattle and Portland this summer,

"Everybody to the ‘t’ thought it was totally appropriate,"

Alamo is named after the San Antonio mission where a small group of Texan independence-fighters fended off Mexican forces during a 13-day siege. Most of them died, but the mission became a symbol of resistance for Texans, who eventually defeated the Mexican army. Trump’s visit, no doubt a symbol of the president’s defiance, comes as he spends the final days of his presidency isolated, aggrieved, and staring down the prospect of a second impeachment.

AUSTIN, Texas (AP) - A heavy presence of Texas troopers outside the state Capitol in Austin as lawmakers return to work amid FBI warnings of armed protests around the country. Some of the more than 100 troopers outside the Capitol on Tuesday wore tactical vests and riot gear. The first day of Texas' legislative session has drawn only a small number of demonstrators by mid-morning. An internal FBI bulletin has warned of plans for armed protests at all 50 state capitals and in Washington, D.C., in the days leading up to President-elect Joe Biden's inauguration. The Texas Department of Public Safety said it would deploy more security to the Capitol but made no mention of specific threats.

FORT HOOD, Texas (AP) - The U.S. Army's top enlisted officer visited Fort Hood in recent days to listen to soldiers' concerns and check on progress at the base. He was met with skepticism at a base that's been stricken with violence and eroded morale in the past year. A December report by an independent review panel highlighted high rates of assault and harassment, leadership problems and issues with the criminal investigation division at Fort Hood. Soldiers in meetings with Sgt. Maj. Michael Grinston agreed that communication and attention to people has improved. They remain wary of how long the changes will last. 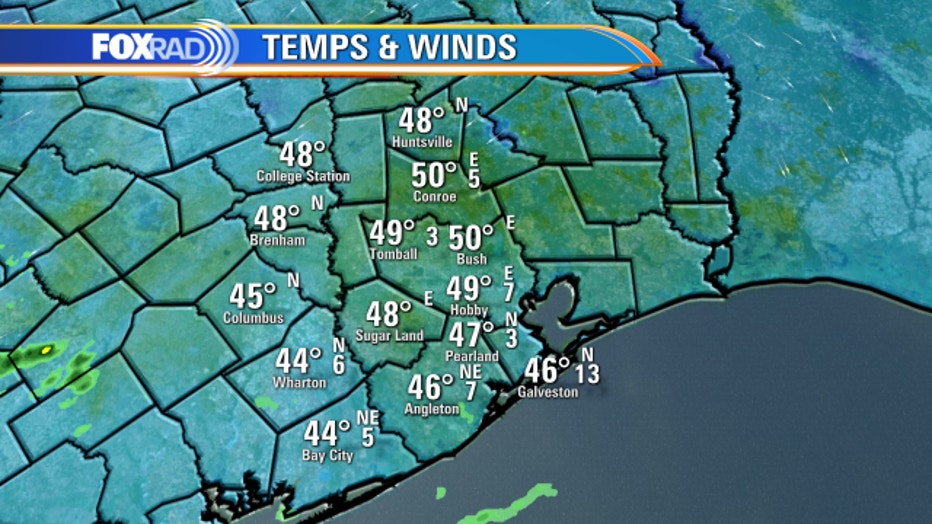 Following a cold, frosty morning, we will have another chilly day. Expect much lighter winds today with highs in the low 50s. Clouds may increase by the afternoon as well. Tonight, lows should drop into the mid-30s followed by a milder Wednesday afternoon with highs near 60. The MLK holiday weekend looks cool with rain likely on Sunday.