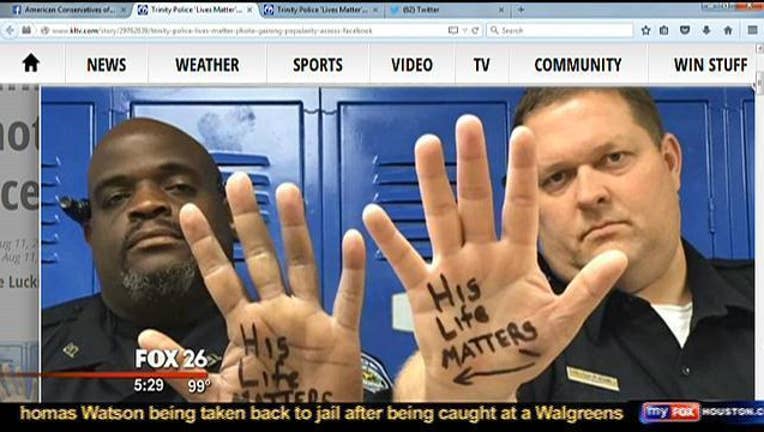 In response to the “Black Lives Matter” movement a photo of two East Texas police officers has gone viral.

The officers say right now there is a lot of racial tension throughout the country when it comes to police but what they did is a reminder everyone is equal.

If a picture is worth a thousand words, this photo might make the Hall of Fame.  The fact that it comes from small town Trinity might surprise you.  You see the same message: two men, Police Chief Steven Jones.

“We wanted to as a department because we're always talking about social issues to let the world know officers are good people. Every officer’s situation is different,” Givens said.

But this picture wasn’t an overnight sensation.  Trinity Police uploaded it to both Facebook and Twitter back in May, but Monday when the organization American Conservatives of Color shared it on Facebook, it garnered 93,000 shares and more than 19,000 likes.

“I was shocked. It took me by surprise because that picture my chief took was 3-4 months old but I'm glad it did because the issue that we're looking at in our nation is a serious one,” Givens said.

And that goes beyond the grassroots effort “Black Lives Matter,” which goes back to 2013 when George Zimmerman was acquitted in the shooting death of Trayvon Martin.  Since then we’ve seen racial tensions soar with Ferguson, Staten Island, and most recently in Waller County with Sandra Bland, with protests using the slogan “Black Lives Matter.”

“They’ve turned it into a hate group no different than the KKK, the Black Panthers and the Skin Heads.  They’re just bullying people and trying to shove their agenda down people’s throats and we don’t necessarily agree with that,” Jones said.

I asked: we've seen a mistrust of police officers in this country,what do you think take to change people's perceptions?

Officer Givens said he hopes other departments take a stance to regain people’s trust in police.