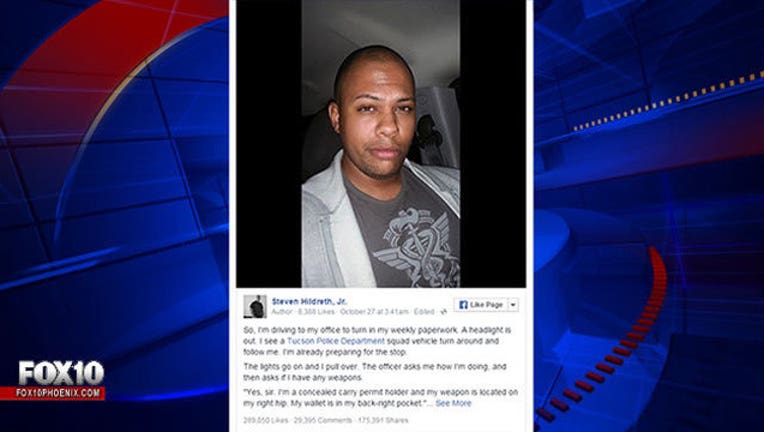 TUCSON, Ariz. (KSAZ) - A man's Facebook post about being pulled over by Tucson police has gone viral with over 150,000 shares.

Steven Hildreth, Jr. says he noticed one of his headlights was out while driving and when a police car turned around and began to follow him, he expected the worst. Hildreth, a member of the National Guard, said he was armed when police pulled him over.

Hildreth said one of the officers noticed that his registration card was out of date. At this point, Hildreth says he knows police have him "on at least two infractions" and he's "thinking of how to pay them."

The rest of Hildreth's exchange with police is below:

Officers return with my Glock in an evidence back, locked and cleared. "Because you were cool with us and didn't give us grief, I'm just going to leave it at a verbal warning. Get that headlight fixed as soon as possible."

I'm a black man wearing a hoodie and strapped. According to certain social movements, I shouldn't be alive right now because the police are allegedly out to kill minorities.

Maybe if you treat police officers with respect, they will do the same to you.

Police officers are people, too. By far and large, most are good people and they're not out to get you.

We talk so much about the bad apples who shouldn't be wearing a badge. I'd like to spread the word about an example of men who earned their badges and exemplify what that badge stands for.

[EDIT: In my rush to post, I accidentally omitted that my wallet was in the back-right pocket, near my firearm. This was the primary motivation for temporary disarmament. The post has been modified to reflect that.

Again, I'd like to thank the TPD and their officers for their consistent professionalism, courtesy, and the good work that they do, both in this particular contact and every day.]