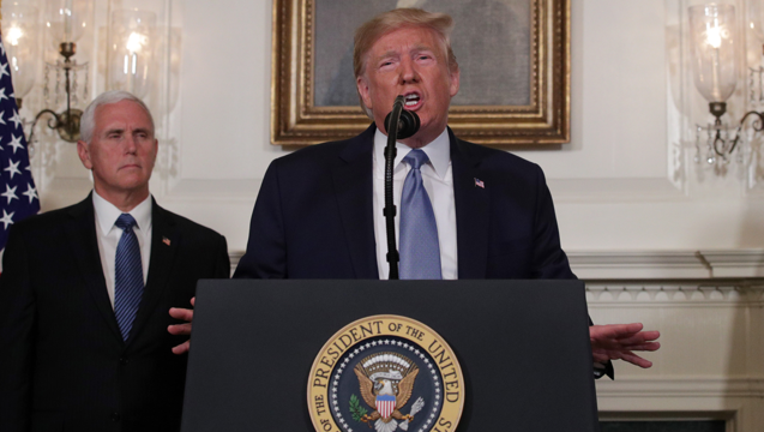 President Donald Trump makes remarks on the mass shootings that occurred in El Paso, Texas, and Dayton, Ohio, over the weekend. Trump came under fire for mistaking Toldeo, Ohio, with Dayton in his remarks. (Photo by Alex Wong/Getty Images)

WASHINGTON (AP) -- Speaking out against weekend mass shootings that rocked a nation, President Donald Trump on Monday called for bipartisan solutions to the bloodshed but offered few details and faced pointed questions from Democrats about whether he had the moral authority to rally America against the spasm of violence and racism.

Trump, back at the White House after remaining largely out of view for two days at his New Jersey golf club, declared the shootings in Texas and Ohio barbaric crimes "against all humanity" and called for unity to respond to an epidemic of gun violence. He blamed mental illness and video games but made no mention of more limits on the firearms that can be sold.

Trump said he wanted legislation providing "strong background checks" for gun users, though he has reneged on previous promises along that line after mass attacks. He seemed to abandon his latest idea of linking gun control legislation to immigration policy just a few hours after proposing it.

"We vow to act with urgent resolve," Trump said as the death toll from the shootings in El Paso and Dayton reached 31 late Monday. His scripted remarks included a solitary denunciation of white supremacy , which he has been reluctant to criticize, and he made no mention of the anti-immigration rhetoric found in an online screed posted just before the El Paso attack that mirrored his own incendiary language. Detectives sought to determine if it was written by the man who was arrested.

The mayor of El Paso said at a news conference that Trump would visit the city Wednesday, though some local lawmakers and others signaled opposition, and the Federal Aviation Administration advised pilots of a presidential visit to Dayton.

At the White House, Trump declared, "In one voice, our nation must condemn racism, bigotry and white supremacy."

He said he had directed the FBI to examine steps to identify and address domestic terrorism. "These sinister ideologies must be defeated. Hate has no place in America," he said.

In the past, the president's calls to the nation's better angels, without renouncing his own divisive language about immigrants and political opponents, have proved fleeting. His path to the White House was built on the politics of division, and aides say he views his road to reelection on again sowing discord and unease about cultural, economic and demographic changes.

Democrats on Monday accused Trump of fostering an environment of hate that led to the shootings, and they angrily renewed their calls for his defeat next year.

"He's been racist from day one -- before day one when he was questioning whether Barack Obama was born in the United States," said former Rep. Beto O'Rourke, a 2020 presidential contender who represented El Paso. "He's trafficked in this stuff from the very beginning, and we are reaping right now what he has sown and what his supporters in Congress have sown. We have to put a stop to it."

Former President Obama posted a statement in which he called for the nation to "soundly reject language coming out of the mouths of any of our leaders that feeds a climate of fear and hatred or normalizes racist statements." Obama did not mention the president by name.

Trump pointed to the media.

"Fake News has contributed greatly to the anger and rage that has built up over many years," he tweeted.

He suggested early Monday on Twitter that a background check bill could be paired with his long-sought effort to toughen the nation's immigration system. But he didn't say how or why he was connecting the issues and did not elaborate on that proposal during his 10-minute address from the Diplomatic Reception Room.

He has frequently sought to tie his immigration priorities -- a border wall and transforming the legal immigration system to one that prioritizes merit over family ties -- to legislation around which he perceives momentum to be building.

His latest proposals would mostly leave it to Congress, which is on recess, to sort out solutions .

Adhering to what has become a GOP talking point of blaming mental illness and not firearms for mass shootings, Trump signaled he would oppose large-scale gun control efforts pushed by Democrats, saying, "hatred pulls the trigger, not the gun."

He called for law enforcement and social media companies to do more to combat extremism and spot warning signs of violence online. He also asked for a reduction in the "glorification" of violence in American culture, including video games, though research does not link their usage to shootings.

Additionally, Trump directed the Department of Justice to seek and prioritize the enforcement of the death penalty in cases of hate crimes and mass shootings. Congress has proven unable to pass substantial gun violence legislation this session, in large part because of resistance from Republicans, particularly in the GOP-controlled Senate.

Trump himself has backed away from previous pledges to strengthen gun laws.

After other mass shootings he called for strengthening the federal background check system, and in 2018 he signed legislation to increase federal data sharing.

In December 2018, The Trump administration banned bump stocks, the attachments that allow semi-automatic weapons to fire like machine guns and were used during the October 2017 shooting massacre in Las Vegas.

But Trump has resisted calls to toughen other gun control laws.

At a February meeting with survivors and family members of the 2018 Parkland, Florida, school shooting in which 17 people died, Trump promised to be "very strong on background checks." Trump claimed he would stand up to the gun lobby and finally get results in quelling gun violence. But he later retreated, expressing support for modest changes to the federal background check system and for arming teachers.

"It took less than three hours for the president to back off his call for stronger background check legislation," they said in a joint statement. "When he can't mention guns while talking about gun violence, it shows the president remains prisoner to the gun lobby and the NRA."

With his Monday proposals, Trump responded to the shootings with ideas that many Republicans in Congress can embrace -- without confronting the gun lobby or tackling the issue of firearm accessibility that many view as a driver of gun violence.

During his White House address, he stuck to a somber tone, but advisers acknowledge that -- as it did during following a similar White House address in Charlottesville's aftermath -- the call for unity could easily shatter if Trump were to react negatively to cable news coverage or if the markets continued to fall amid escalating trade tensions with China.

Trump at one point in his remarks erroneously stated that the Ohio shooting had taken place in Toledo, not Dayton. It followed an error made by former Vice President Joe Biden Sunday evening, when he described shootings in "Houston" and "Michigan" before correcting himself.